Just for a laugh: how not to photograph your airbnb place

So I was searching for airbnb places for a Washington DC vacation we’re planning in the fall. Found one with a perfect location. So, naturally, I went through the photographs.

The photographs were uninspiring, but that wasn’t why I rejected the place. I rejected the place because I was looking at one photo of the view through the window—and gradually realized that the window showed the reflection of the host taking the pictures in nothing but bright red underwear.

It is sort of reassuring to me, in a way, that whatever mistakes I may make as a host, I know for sure I won’t be making that one.

the window showed the reflection of the host taking the pictures in nothing but bright red underwear.

Yikes! Now I’m wondering if this is the American usage of ‘underwear’ or the English usage. Was she just in her knickers (US) or in knickers and bra? (English usage).

Either way, you never know … she might have been subtly advertising another ‘amenity’ that she offers!!!

No mention of gender…

I think it was a man, or at least someone wearing boxers. The reflection wasn’t clear, so if it was an advertisement for additional “amenities,” it wasn’t a very good one!

Typical. It’s more of a guy thing than a girl thing - to wander round in underwear

It’s actually a thing for people to do that “accidentally” in photos on eBay and CraigsList. Maybe it has found its way to AirBnB.

and here it is
The famous ebay kettle pic - WARNING - picture contains nudity! 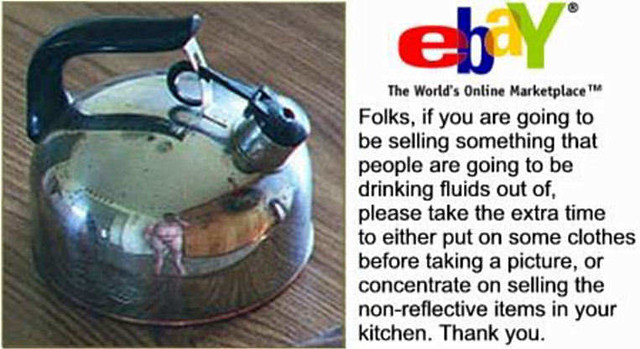 Oooo, I’ll bet that’s the same guy who was selling his dining room table a while back! Oh, hang on a minute…the other guy had a mole above his lip.