Judge Judy and the chargeback guest

I hope this works. Enjoyed watching Judge Judy on this one.

My mind immediately went to a post on a NC coastal Facebook group by a woman complaining about the rain the first 3 days of their vacation & it was to rain until the end of a week. She was stuck in the house with children and nothing to do. She was unhappy the rental agency would not refund her for the stay.

This beach is a small island with few shops & restaurants. The closest movie theaters, indoor aquarium, trampoline park, etc. are at least an hour drive away.

They knew where they were booking when they made the reservation.

People can be ridiculous.

I had a guest that luckily gave me a 5 star review BUT in her review she mentioned that it rained daily. She rented in April. I guess she never heard “April showers bring May flowers.” LOL

What do we got to do to get Judge Judy to train the CS?

Zip lining takes a few hours, max. What had they intended to do for the approximately 90 hours that they weren’t doing this one activity?

“You have very spoiled children.” One doesn’t wonder where they got that from.

I had exactly the same thought. “There was nothing to do.” ??? Gee, people who need to be constantly entertained. Pretty sad. Guess they didn’t enjoy each other’s company enough to just hang out together without distractions.

My friend who’s a ranger at Yellowstone said people complain every summer that the schedule for geyser eruptions isn’t precise.

I have to say, I do think it’s somewhat odd that those hosts use skiing and ziplining as part of their listing title when it isn’t a part of their business and may or may not be open.

If they got a cardholder refund from the credit card company, AirBnB has probably cancelled their registration with prejudice.

That’s like folks that travel to the tropics and then complain about bugs. Some folks should just stay home, especially if they going to leave a 4 star rating because of weather.

This further supports making sure we have dates of stay, guest name & contact info filed separately “just in case”. 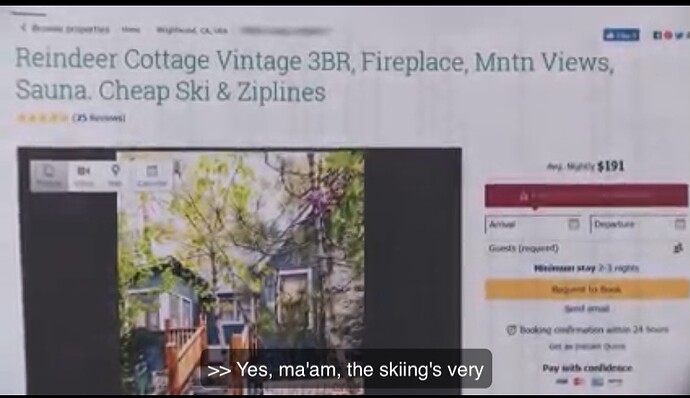 that the schedule for geyser eruptions isn’t precise.

I had a recent RTB from an Air zero review who wanted to know what times the dolphins come up the canal and if the manatees lived there, too. I explained this isn’t Sea World and dolphins do come up regularly, but I couldn’t promise a dolphin sighting and pointed her towards tours and the Manatee Viewing Center.

Some folks should just stay home,

I couldn’t agree more. “It’s not like this in Chicago.” No it isn’t. You’re not in Chicago anymore…

I think this platform is vrbo

There better be some damn Reindeer when I book as well.

That’s like folks that travel to the tropics and then complain about bugs. Some folks should just stay home, especially if they going to leave a 4 star rating because of weather.

I have received one of those.

But these people are everywhere. They even manage to write one star reviews of the National Parks in Utah.

Years ago my ex-boyfriend was taking a trip to the UK to visit his mom and sisters and asked my then 12 year old daughter if she wanted to come, too, as my dad and his wife, (my daughter’s grandpa and step-grandma, but the only grandma she’s ever known) lived in the UK and she could visit with them.

So she went along, and was very hormonal at the time (she got her first period a week after they got back), so she was actually no fun to be with at all. Every day he would ask her, “So what would you like to do today- go down to Picadilly Circus, or see Buckingham palace, maybe?” Her answer would be always be a sullen no, and that she didn’t want to do anything.

One day he, my daughter and his sisters and their kids drove out to Stonehenge. My daughter, her nose buried in a book, ignored the fact that they had arrived and everyone had gotten out of the car. My boyfriend said, “Hey XX, we’re at Stonehenge, get out of the car.”

Her response, without looking up from her book, was, “Yeah, I know, I’ve seen pictures- it’s just a bunch of rocks.”

At that point, after tiptoeing around her moods for a couple of weeks, he’d had enough and ordered her out of the car.

The hilarious thing is that years later, he looks back on that time as a trip from hell, but as an adult, my daughter looks back on it as a great holiday- she has no concept to this day of what a b***h she was to be with.

Thankfully, I’ve been blessed with wonderful guests. We had a power outage that lasted for 2 days while a guest was here. We didn’t even have water because our well requires power. Our guests were troopers and still managed to have a great time. Left us an awesome review and have since been back. The key is communication, and it needs to be a 2 way street. I get very wary when a guests books, I send them a welcome email and then hear nothing back.