Got this email from Air today 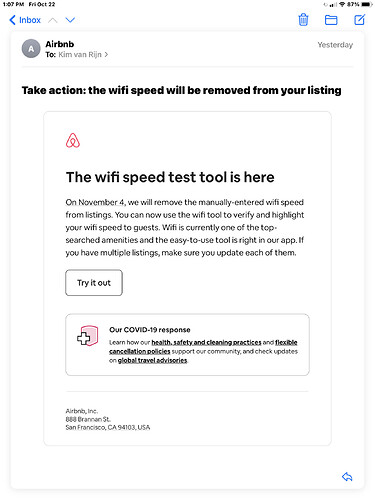 I’ve done speed tests on the WiFi in my two AirBnB houses and pictures of the speed test results are posted in my listing. Air claims they will remove them by Nov 3rd. They want me to use their tool to post the WiFi speed.

I intensely dislike how they micromanage everything. I can get it done on one house by the deadline but the other is rented longer term until at least mid-November so I can’t get in and use their speed test tool for about another month.

We will NOT use this. If you post a speed, a guest can use it to claim issues with a stated amenity and push for a discount.
.
We promise WiFi - that’s it. No speed or Mbps. You have no control when your area is under heavy load, guest has a crappy driver or wifi adapter, etc.
.
No Thank You!

I intensely dislike how they micromanage everything.

This isn’t micromanaging, this is being downright bloody intrusive.

Annoying but not having it posted at all shouldn’t really matter much. I wonder if they have had problems with folks misrepresenting their listings?

I was opening the forum to ask you all about the same thing. Their approach is an abusive one. How the heck are they considering us partners when they launch these dubious proposals with a threat?

And if you press Try it out , you are warned: M-Lab (aka their partner) will process details like your IP address and make them public as outlined… bla-bla. Very interesting.

Their request is a very strange proposal here in UE, at the near limit of Data Protection Regulation.

In my opinion this info does matter a lot for the guests. Not for all but for many of them. The lack of wi-fi mention for a place makes me to ignore that place as an option when I search for a place to rent.

The Internet speed is truly important for a lot of things in our times. A lot of people are working remotely. I think my results (I started in 2020) are strongly related to this info that I have published immediately.

But this stupid test depends a lot by guest devices. I already encountered the discount seeker guest with a historical smartphone who made me to change the router for him instead of giving him a discount

Never had anyone ask about my internet speed, not posted.
Best not to declare something you may not have control over on an hourly or daily basis.

Best not to declare something you may not have control over on an hourly or daily basis.

We’ve never listed our internet speed, mainly because it varies so much within the apartments due to 1m thick walls!

That said, in four years here we’ve only had one complaint and I sorted them out by giving them an alternative access point (we have several

I wonder if they have had problems with folks misrepresenting their listings?

I have seen loads of guests online complaining about wi-fi in general. I think this tool of theirs is perhaps their way of finding a way to settle disputes and complaints. Some guests are complaining that a listing offered wifi but wasn’t “fast enough for them” (and then a lengthy discussion of what is fast enough or not ensues with very little agreement).

It’s difficult to argue with someone with an unquantifiable subjective complaint. But if the host has used the Airbnb speed test and posted the resulting speed in the listing, I suppose that Airbnb can then say that it was disclosed ahead of time and squash the complaint. There seems to be a lot of discount and refund seeking based on the speed and/or quality of wifi, this should, theoretically, cut down on that.

And/or, the digital nomad crowd is particularly vocal and I’ve seen posts stating that ‘everyone should complain so that Airbnb can solve this wifi issue’. It’s also possible that Airbnb is just plainly accommodating this crowd.

It’s foolish either way because all speed tests will show different speeds at different times so I doubt it will do much good, especially as the demand for it is coming from a very demanding and entitled type of guest.

You could run a government agency with our wifi, it is especially reliable and crazy fast, but I will never put that in my listing because I don’t want a bunch of guests who should probably just rent an office space instead. I see so many guests acting arrogant about the work that they need to do at an Airbnb and how important is that the host has exceptional wifi for it (some even complain about not having access to the router).

It is not a very practical crowd.

It’s all BS because if their work was that damn important they would travel with their own personal hotspot. I don’t like the attitude and I am one more annoying Inquiry away from making a house rule that says “No Digital Nomads”. I have turned down potential tenants because they WFH full time. It’s just gotten out of hand.

We do too. But you gotta ask nicely

But this stupid test depends a lot by guest devices. I already encountered the discount seeker guest with a historical smartphone

Totally. And I don’t see that element being discussed much. But the Venn diagram of people with old devices and people who have high wifi standards probably doesn’t have much overlap.

We did have a couple once who had trouble with our wifi. They let me come down to help them with it and when I walked into the unit, there was a laptop so ancient and so large on the kitchen table that I thought it was a piece of luggage

I promptly excused myself to avoid giggling in front of them and then just ran an ethernet cable from across the hall for them.

One of my first guests gave a 2 sentence review,

But, then he never sat in my back room where in a certain spot the connection has to go through two brick walls. If I move over use 10 feet it’s all normal.

As many have pointed out, internet speed is such a variable thing. It depends on where they are in the house, what devices they are using (and how many of them, and what they are using them for!), the period of time during which they are using them, and so on. I show a picture of a speed test I did on mine as one of the listing photos. But it was done on my new-ish iPad and on the 5G portion of the internet only.

I don’t think they’ll remove the picture; I think what will be removed is where I manually input the results of the test.

From a guest perspective, I have stayed at a listing that said they had internet. But all they offered was a hotspot with a total of 5G of data for an entire week’s stay (the data limit was not disclosed).

. I use more than that in one day on just my phone, and about the same on my IPad—-and I’m not using either to stream movies or play music. Since it was a remote location with poor cell service (I have unlimited data on my phone plan) I was pretty unhappy!

(the data limit was not disclosed).

Eek. I hope you mentioned it and that they’ve added it under Amenity Limitations by now because that’s bad, they were just asking for trouble.

They do not consider us partners, and probably have not in at least 7-10 years.

seriously doubt that anyone at Air is going to remove one of your photos.

Ditto, exactly the same, one problem in 5 years and I provided an alternate access. I would never list a WiFi speed.

I advertise that I have WiFi but don’t mention speed. I don’t provide TV (I use off the air for myself). I actually got a better cable modem package with more data so folks could upload their whale watch videos (uploads cost more) or watch Netflix.

I’m happy with my 1GB download speed, and have had no complaints from guests. But just this week I had to shift over to my iPhone to bid in an EBay auction at 3am my time because the cable company was doing maintenance.

I’m not guaranteeing their performance to my guests because they’ve had some very inconvenient outages, one for half a day because of unprecedented windstorm damage to their fiber backbone (which passes right in front of my house). I also can’t guarantee that a storm like that won’t cause power outages, which it did. After all, a trip to Alaska is supposed to be an adventure!

My STR guests haven’t complained about internet speed. However I have a LTR tenant who shares my internet and complains constantly. It was exacerbated by her need to work at home during COVID lockdown with many Zoom meetings. I have no control over heavy use in our area and many new accounts have been added recently stressing the system further. I don’t promise anything!