Inquiry today - a woman objected to a $20 extra person charge

A woman inquired today, “you charge extra for a second person? Seems unfair and I will pass. The idea that a couple has to pay an extra amount when they take up no extra space than a single person is insulting. Maybe it was a mistake when you set up the account?”

She didn’t ask for a discount, she merely stated that she was offended and passed. Why would she bother to inquire to tell me off. I can see if she was asking for a discount or waiver of the extra person fee. Why is it that some guest expect so much for so little? I preferred that she would pass without telling me. This sounds like a guest to avoid. Nothing goods comes out of this with her attitude.

That’s her opinion. Brush it (and her!) off…

Not worth another thought.

Agree. Just move on and be thankful she didn’t book your place

As a property manager who also does long term rentals in multi-family houses, we charge $XX utilities PER PERSON. I often get people asking questions like “even my kids?” - sometimes I ask them - well do your kids shower? flush the toilet? wash their hands? eat food made from using the kitchen? - that’s what utilities are for. water, electricity, gas, sometimes internet and cable - then you really have to watch out for teenagers downloading illegal files.

As I read through this forum, I find just the same as other hosts, there will always be good and bad in all areas, guests, hosts, renters, etc. This lady I would not accept after making such a comment. Better not to say anything than to say something negative, right?

Click Decline. Imagine the other faults she would be sure to find.

Alsothe use and cleaning of bed and bath linen, wear and tear on furniture and carpets.

Some people really honestly feel that they are being helpful. In her case she was being helpful as she made it clear that she was a guest to avoid. No ifs, ands or buts!

I think children should be charged double…way harder on a property than well behaved adults.

You could go back to her and say. OK - but you have to share the shower and share the single towel. Plus anything you may use in the kitchen should be halved. What a silly cow - agree with the others, just be thankful she didn’t book.

Ha ha. I guess she’s never been to Europe. Single v. double occupancy prices are pretty standard over there.

I have been considering adding a double occupancy rate, because it is just so much less work to host a single person than two people.

Stringman, I don’t know where you’re located so I don’t know if it’s normal to charge extra after one person. I’ve seen people doing that on Airbnb and thought wow, that be a great way to make a little extra. Prices are much lower around here than they were a few years ago before there were so many hosts so every little bit helps.

But as I considered doing it, I couldn’t justify it for any reason. I was thinking around $20 a night too for a second person. But I couldn’t think of really a good reason for doing it. So I decided not to. I would say 90% of our guests are two people. And if we added $20 a night but didn’t lower our default rate a bit, there was just no justification for it. A second person isn’t going to come anywhere close to using $20 a day in extra electricity, hot water, cold water, sheets, towels or anything. Maybe they add a few cents a day to our costs, but it’s so negligible I doubt it could even be calculated. I mean two people are going to use just about the same amount of electricity as one person, so there’s no additional cost there. They’ll use an extra towel, but towels cost about $9 bucks - so a $20 per day additional charge for that is certainly way above and beyond anything they could possibly use.

We do charge $15 extra for a third person. That’s fair, because our rooms are really setup for two. We have to bring in an air mattress for them, and a whole new set of sheets. It’s a lot of extra work for us. We used to charge $25 for a third person, and we almost had no three-person parties book with us. But when we lowered it to $15 we get several three-person parties a month - and the additional $15 a night is great extra income!

Anyway, I’m not saying you’re doing the wrong thing because I don’t know anything about your circumstances or reasons for doing it. But when I look at places for me and my wife, I do find it really annoying that some places charge something extra for a second person. It seems a little unreasonable when their place is setup for two people already - and their base price is already about the same as nearby properties. And when you see a rate like $87 a night you think, wow, great rate! But then you’re hit with an extra $20 charge, making it $107 a night - that’s a pretty big difference. But I would never write to them to complain about it! How crazy is that? Just move on and find another place!

She may have been extra annoyed because when she saw your price and then looked at your place, she probably really liked it and wanted to stay there - until she saw the $20 nightly fee and realized it was unaffordable for her. She was probably like “Darn… I wanted that place and thought it was one price but it was a much higher price.” She probably felt a little cheated - like she was sucked in to spending some time looking at your page by a loss-leader price.

Anyway, I do think it’s weird she bothered to write you about it.

I charge because…the intrusion into my world changes based upon the # of guests. For example, in this case, one person is quiet and easy. Two people are suddenly “on vacation” and the vibe differs and is not as pleasant. So 2 people would cause me to want more money based upon the energy I have to expend to share my space with 2 vs 1.

Alsothe use and cleaning of bed and bath linen, wear and tear on furniture and carpets.

Wear and tear is another issue I often deal with. I’m sorry but I do not want to rent my 2 bedroom suite to a 6 person family.

I had an inquiry once for a couple who wanted stay in my room (I have a SINGLE bed) and my listing says it is for 1 person. !!!

A second person isn’t going to come anywhere close to using $20 a day in extra electricity, hot water, cold water, sheets, towels or anything. Maybe they add a few cents a day to our costs, but it’s so negligible I doubt it could even be calculated. I mean two people are going to use just about the same amount of electricity as one person, so there’s no additional cost there. They’ll use an extra towel, but towels cost about $9 bucks - so a $20 per day additional charge for that is certainly way above and beyond anything they could possibly use.

The ‘extra person’ charge is not proportional to utilities used. It’s a way to deter people from booking for 2. (= kekeke

This is interesting since I do not charge for a second person nor shall I since I am renting an apartment but I charge $25.00 for each person over 2 and my husband and I know it is double the work with each extra person staying at our River House Apartment. I have been asked many times if I charge for children and the answer is most emphatically yes. So when did children become less work than adults? In my house when my sons aren’t home the house stays clean and my work is considerably less. Oh well it is always something.

Well, 1 + 1 = 3 in my book as 2 people involves conversation between each other and doubles the emotional interaction. I suggested that this pricing works for us as our place is generally full and that she could probably find a place in our area that did not charge for the extra person.

I really think if I was hosting in my home I would charge for each additional person since it really does make a difference if it is one person in a room or two. My situation is different and I think since most of my guests are couples and my base price makes me a good profit it is fair all around.

The only reason this woman took the time to write you was in an to attempt to make you feel insecure.

She wanted to get in your head and make you second guess yourself and your policies. That’s why she said “I’ll pass.” She wants you to think you lost her business and probably many other bookings due to your policy. This woman is just a bully.

It is an interesting conversation. I have two bedrooms in my home - separate level. Beds for 3 in one room, second room sleeps 2. So if I have 4 people, it’s a lot more work. So in the past I’ve charged one rate for 3 people, but then $20 each for the next two.

In my opinion, having two private bedrooms when traveling in a group is AWESOME and worth paying for.

However, I’ve recently gotten concerned, as an earlier poster said, that people seeing that $20 each for over 3 would be offended, not understanding.

I’m beginning to think I should just set the price as I would want it for 5 - which is about $120. I think that’s still a great deal for a two bedroom space with a kitchen and private bath. It’s not completely polished, it’s in our basement (full sized windows) and we have an office on the same level - so it’s not completely private.

But I’m conflicted because, as it’s been said, a group of 2 is WAY less of a drain in all ways than a group of 5.

Thoughts? Any advice appreciated. I’m really working on my prices so I can see if this will be a profitable business for the next year. I have other options for use of the space and for income so it’s important. Come October 15 I need to fork over the annual insurance payment, so I don’t want to book into the end of the year without knowing I can really make some money. 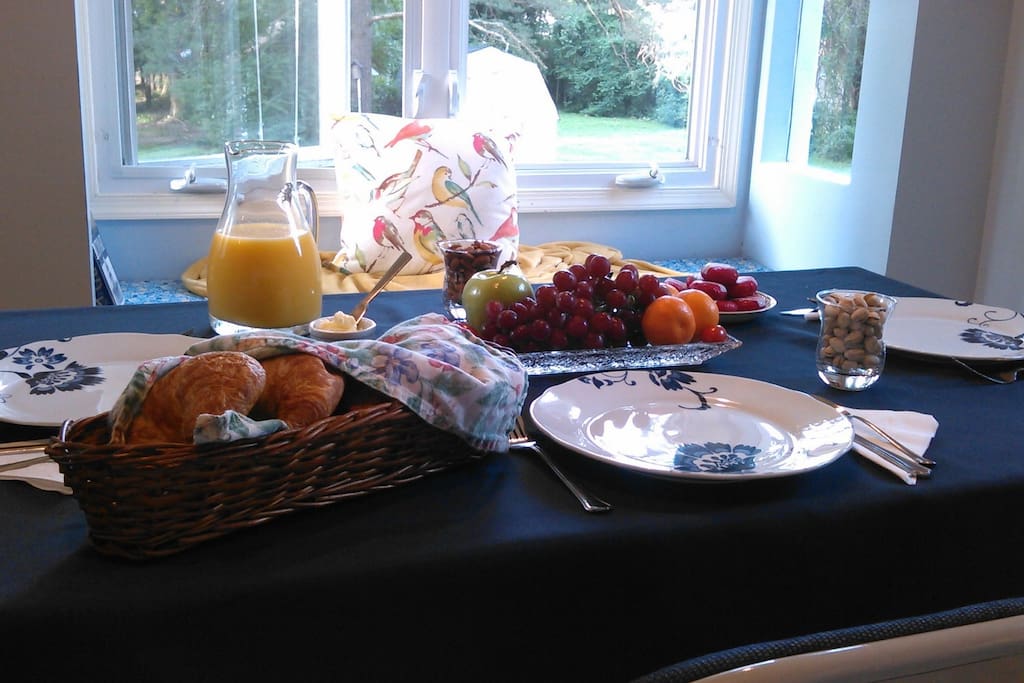 2 Bedroom Private Suite, in our Home, Breakfast! - Guest suites for Rent in...