Last 3 lots of guests - all of them have under booked for the number of guests…saying on this being pointed out …" oh - didn’t think it really mattered" and then pinging you on value because you made them pay. Todays group - booked for 6 and brought 8, with the excuse - didn’t we book the whole house? Yes - you did, but the amount you pay is dependant on the number of guests. Getting very over this under booking routine!

That really stinks. I don’t know how distant hosts do so either. It’s bad enough being on site.

We haven’t had it (yet - there’s still time, we’re very new).I did have someone plead with me to bring two extra guests with their airbeds but we really don’t have space and it was starting to sound like a party house so we declined. I made sure she was fully aware we would be in the house next door in case they tried it on - we’re not but it hopefully deterred them . In the end they didn’t go ahead with the booking, which I was quite relieved about.

After close to 400 guests I’ve just had my first instance ever of someone booking for himself and then having an overnight guest. My second person charge is only $5 and he paid it immediately on request, which was after he had checked out. It was annoying but on the whole, not a big deal until he saw that I mentioned it in his review. In his response to the the review he’s claiming that he “thought we were square” because he told me when he checked in that a friend would be coming by.

I won’t bore you with the other details but bottom line is that as Airbnb becomes more popular the quality of guest and number of problems is going to increase I’m afraid.

I rented a whole house in Costa Rica (via VRBO) and there was no per person charge. It had 5 bedrooms and the number of people listed was 14. There were 8 of us and we used all 5 bedrooms plus the murphy bed plus the sofa bed due to power outages and a spider invasion in one room on the last night. No extra charges. But it was $750 a night. Could you raise your fee for everyone and skip the person charges?

I too live next door to my rental and on the one occasion it was obvious they were thinking of trying to pull one over on me I let them know I was 40 feet away. I declined their request but it took some doing to convince them it wasn’t going to happen. I’ve also had quite a few people request “just one one person” but I always decline - 6 people is my limit, no exceptions.

I do not allow IB and prior to accepting a booking I go over all the house details/rules just to make sure there are no misunderstandings. I don’t want either of us to be disappointed or upset.

It depends how you value your time. I can be relaxing on my time off instead of waiting around for guests to arrive. Maybe I lose out on some extra guest income, not going to lose sleep about it.

I would be more worried about what may be happening if you have no oversight.

I value my time highly, particularly at weekends when Himself isn’t in London working. So no, you can’t check in three hours early on Saturday; we will be out enjoying ourselves for lunch together. No, I am not getting up at 6 am to give you an early breakfast on Sunday; we are up at 6 am five days a week and Sundays are a precious catch up sleep time.

Tomorrow’s IB guests seem to have got the hump with my (more politely put) NO on both fronts, despite proffering workable solutions. I’ve no idea how they are travelling, what time they hope to arrive, despite needing to send them directions; Sat Navs send folk to the wrong location, so I expect a panicked phone call after they’ve failed to read these on the platform.

We have had that happen a lot as well. People will fight tooth and nail just to save a buck and then they think they can just write a bad review and get away with it. Thanks to Air Bnb they do as well with the power of review that is given to the guests and we host can do nothing about the injustice. Now I just increased my price overall to avoid the stress. Sucks if it only 1 or 2 person the community seems to be doing it to themselves for the future guests.

My listing and my communications with my guest leave little room for interpretation about how many people are allowed on the property. Plus, they have to agree to those rules to book.

Latest guests, booked for 6 arrived with 8, did not read houses at all, left 75 minutes after check out time and left the kitchen like this 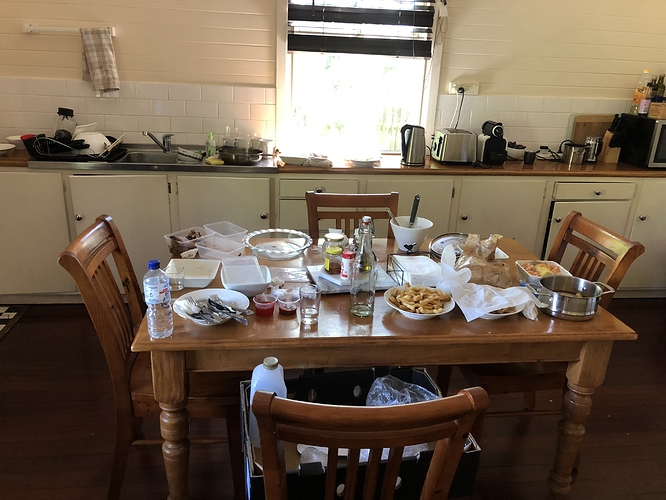 Current guests arrived with a young child in a non child friendly house!
Absolutely no mention of it In the booking and my face must have said it all.
Oh - we didn’t think you would mind! What part of no children welcome don’t you get?

OMG, on both fronts. How dreadful for you to have these people back to back. Have you told the child woman to leave/asked Air to rehome them? I really hope so! I would be fuming; in fact I am, on your behalf.

I had an enquiry this morning for three adults and one child in our two bedroom suite, with a query “I see you have a third shower room; can we use it as well,or is it priced separately”. Grrrrrr. She will not have known about this shower room, unless she had read our other separate listing, where it’s ALSO stated clearly that our house is not safe for children.

Polite hat on. Her child turns out to be a 15 yr old daughter. I’ve offered a slight discount on the third bedroom/shower, whilst pointing out that the cost of the suite goes down with only three occupants. I had to balance my fury with understanding this would be a good three night booking over a weekend in summer.

I had to balance my fury…

These people actually read your listings and just asked a question

, why do you get angry because of this?
Not safe for children: IMHO, a 15yo can hardly be considered a child in this respect.

I sometimes think people get angry too quickly at their (potential) guests, and I’m afraid sometimes this forum is, a tiny bit of, a bad influence in this

.
I once got totally worked up by a guest who I perceived as high maintenance pre-arrival and a bit intense the first hour after arriving. I had just been reading a lot of horror stories on this forum and just hadn’t had a great day. In the end she proved to be a wonderful guest, who we now consider a friend. This summer she invited us to her house in the north of Spain and we had a great time together.

I once got totally worked up by a guest who I perceived as high maintenance pre-arrival and a bit intense the first hour after arriving.

I think that’s exactly what happened to me this week with my guest who asked to check in early. I spent too much time worrying about it and posting about it when really it wasn’t that big of a deal. I have another guest now on his second day with me. He had a similar MO of having a special request at the time of booking and saying he is in town to visit a friend. I had to make a determined effort to treat him as the individual he is. So far he’s perfect and his friend has not spent the night.

Unacceptable! I hope you will mention all that in their review! Some people need to be weeded out of Airbnb.

Perhaps I haven’t explained this clearly or well enough. The pre-acceptance booking showed 3 adults and one child for our two bedroom/one bathroom suite. I had to then ask how old the said child was, before learning it was not a child at all. I don’t know if this would affect the prices shown to guests? But hey had to have read our other listing to know that we have another shower room in the house and both listings highlight how unsafe our house and garden are for young children. I will host children from nine years at a pinch, but we had a toddler, brought unannounced, last year (when I was green…) who was left upstairs unsupervised whilst his parents had breakfast. He fell down the stairs in the kitchen. If I hadn’t been at the sink to hear him coming, he could have potentially hit his head on the granite work surface or floor tiles. And I hurt my back catching him as he fell; he was a huge lump for an alleged 2 year old!

More flummox than fury, just trying to understand the juxtaposition. I do agree about the horror story effect, which is why I disappear occasionally.

Only 12 entire houses here and everything else is over an hour away. Unlikely that anyone close would have a vacancy or a large enough house to take them as there were 8 adults.

one star for everything and a non recommendation. The funny thing was they asked at 10 when was I coming to cook them breakfast! Had to explain that the breakfast was supplied and up to them to cook it. Mind you - how the hell would you cook anything in that enormous mess?

So her ‘child’ is really an adult. I say children up to and including 11 years. A 12 year old is an adult…

If extra guest charges are clear in your house rules don’t feel awkward about saying no. You should not have to carry the expense of extra guests. From power to water to Internet access, cleaning, and trash disposal, the impact of illegal guests adds up. Frequent cleaning is tough on furniture and expensive. Sleeping on carpets or couches without sheets, or using seat cushions as pillows, is unhygienic. Easy decision…