How to change order of albums that appear when a potential guest clicks on "all photos"?

New host here. Right now, the order of my albums goes from Bedroom 2, Bedroom 3, Bedroom 1 which is a little odd, and I’d like to edit it. I cannot find any way to either change the order or rename albums. Can this be done? Many thanks.

I don’t know of a way to re-order or re-name the rooms.

You can change the pictures that accompany those labels by moving the pictures but that doesn’t address what you’re asking.

I’m just replying, without any answers for you, to let you know that the non-response to your post so far is not from indifference to you but from mystification that many of us (so far) just don’t know how to help you.

If I were you I would send a written message to Airbnb if they might have any suggestions for you.

Good luck, and stay tuned for some wizard here to swoop in and solve this one or suggest a path forward.

Yes and no. You can’t change the names of the albums or the order of the albums but you can trick the system into putting the rooms in the order you prefer. I imagine that your issue is that your master bedroom comes last when scrolling through the photos by room because it is labeled bedroom 1 (because bedroom 1 comes last)?

I went to the “rooms and spaces” settings. It looks like this and I marked the relevant settings. 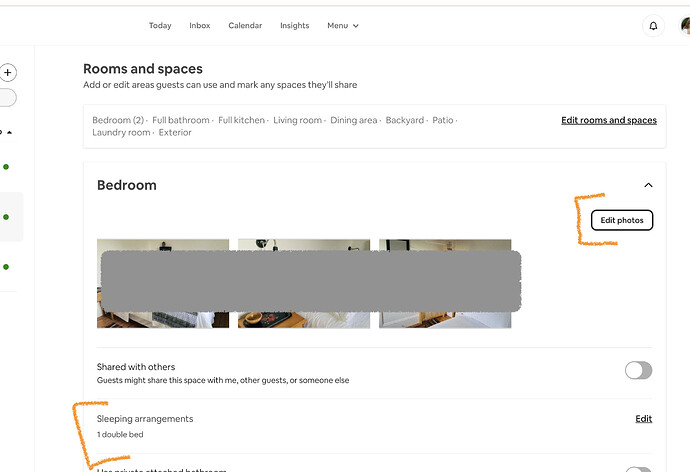 “Bedroom” (which is Bedroom 1 that guests see looking at your page) previously had the sleeping arrangements of “queen bed” but I changed it to “double bed” and then I changed the photos at “edit photos” so that they were photos of the bedroom with the double bed. Then I went “Bedroom 2” and did the opposite, changed the sleeping arrangements to “queen bed” and edited the photos so that it had photos of the bedroom with the queen bed.

Now, if you were looking at my listing and scrolled through the photos, you will see the bedroom with the queen first, before the smaller bedroom. It will, however, be labeled as “Bedroom 2”. But I don’t think that matters. It’s more important to show the larger bedroom sooner in the photos.

Sorry, this was hard to explain for some reason. Maybe I need more coffee, lol. Let me know if it helps or if you have any questions. It is the only work-around that I’ve found.

edit to add: This is how it looks on the website. The larger bedroom is labeled “bedroom 2” but it comes first in the list and it is also clearly marked as having a queen bed. 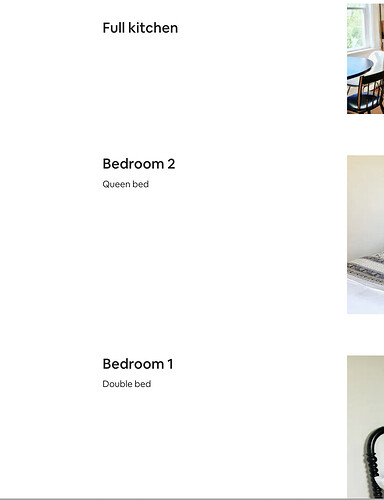 1 is last and 4 is first? Sounds like dyslexic programners.