How many views are you getting?

Just out of curiosity wondering the number of views you get on average? My listings are usually getting between 400-500

Is this monthly or daily?

I never look unless someone here asks. For the last month it was 708.

We previously discussed that it doesn’t seem to be a very helpful metric. My booking rate for the last month was only 1.4%. But who cares if I was booked almost every available day? Waste of my time to look at those metrics. Dec 2-5 was blocked for my cash client. Dec 23-26 was blocked due to having 13 dogs here and wanting to leave the house a few hours on xmas. The 28th was another cash client. I had 3 unbooked/unblocked days in Dec. But that 1.3%?. I guess it’s the percentage of folks that looked then booked but how does that help me? 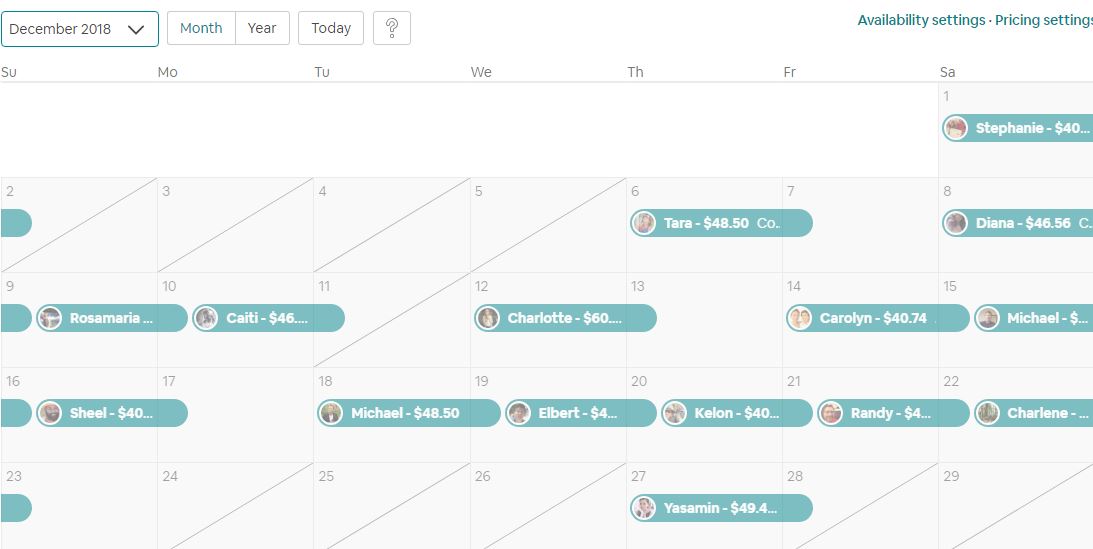 Not sure. Just what’s on the app under views

Yeah I’m usually fully booked so it’s not something I measure performance by.
Just curious if thats a lot of views but judging by you guys its not

Every listing and market is different. My single room however can’t compare to a whole house that holds 10 for example. There are lots of single rooms, not so many large houses. I get over 1000 views per month some months but don’t get any more booked than when I get 600 views.

Seasonality is going to affect this greatly too.

And because my bookings are work related, I see hits increasing towards month end, dropping sharply towards the early part of the month.

I also use the views as pricing or #of days feedback. It looks like quite a few hosts exited lately and prices are changing for the better. I sometimes test new pricing and often it’s a surprise. There are strata of potential guests, and sometimes you need to ask higher to make it credible. Strange but true

ask higher to make it credible. Strange but true

I’m just now experimenting with my new higher prices. It’s too soon to know much but so far no decline in bookings or ratings. My guests today asked “how long have you been doing this?” I said almost 5 years. Their reply "it shows. You’ve thought of everything and done a great job. " Both my higher rate bookings completed so far were retired folks who raved about it. I wonder if they do their searching with a higher bottom price?

A good host should be always looking to improve their listing. Cost is the only barrier.

As a statistician I find the numbers quite useful. For example if you get 800 views a month and on average 1%, or 8, of those convert to bookings then if it is random 90% of the time you will get between 3 and 13 bookings. The exact numbers aren’t so important but it gives you some idea how much bookings might vary in any given month due to chance alone. (It is called a Poisson Process and assumes each booking has a random, equal, independent probability of being made after a view)

We had a host in the area who was always on the front page. But his reviews were right out of Jerry Springer! He and a bunch of the others exited, and opened up the business. Really my biggest metric was high maintenance guests. I was getting too many applications so I decided to test my price. Surprise!

FYI: if you get on average N bookings in a particular month (so adjust for seasonality) then the “standard deviation” is sqrt(N) where sqrt() is the square root function. So if you get 16 bookings in August on average then the SD is 4. And 4 times the SD gives you the 95% range. So for this example 95% of the time you will get between 8 and 24 bookings (4*4=24-8=16). The sqrt rule gives you a rough idea of booking volatility due to random chance alone. This assumes you have some leftover capacity each month, If your expected number of bookings means you are full up then you won’t see it. More likely in your down months.

@JamJerrupSunset James, as you are a statistician, I’d appreciate your input, as follows: shouldn’t my number of views go down as I get booked (i.e. if I’m fully booked for the next 90 days, wouldn’t the number of my views go down?). Also, would it make a difference in the number of views if you compare a host who accepts 1-night stays vs a host who will take a minimum of 7 nights – I’d imagine that the host taking 1-night stays would have more views than a host that won’t accept any less than 7-days stays – am I wrong?

It’s not really a statistics question so much as how Air puts a listing up for viewing. My guess is if people put in specific dates then it will restrict the views to places that are available on those dates so yes there should be less views if you get booked out quickly, all things being equal. Then again maybe you got booked out early because you had more views. Hard to tell.

@JamJerrupSunset Thank you for the explanation you have provided…

If you are fully booked it does not help you. If you had a sub 2% conversion rate and you are at 30% capacity it would tell you that something is seriously wrong