I’ve considered adding the upstairs bedrooms for an Airbnb stay. I’ve hesitated because I would then have to keep all communal areas super clean which I don’t do now. In addition, my two dogs stay indoors most of the time and bark at people who walk their dogs on the sidewalk in front of my house.

How do you dogowners handle the cleanliness and barking issues that go with having dogs? Do you keep your house spotless & hairless? Do you put your dogs in the bedroom for the night?

We do our best to clean the dog hair, but we’re not going to be confused with Martha Stewart any time soon. I believe that guests who choose a place that has dogs are less picky about cleanliness. Our dogs only bark when someone is approaching the house or when there are squirrels in the back yard so barking isn’t an issue. If there are a lot of dogs walking by your house and your dogs are barking at them you might consider working with a good trainer. It worked wonders for us. We have the dogs sleep in our bedroom with the doors closed. This is because I don’t want guests to let them out the front door.

I strongly suggest that you include pictures of your dogs in your listing. Many guests won’t see that it says Pet Owner: Dog(s) on your listing. Many people don’t read, but most see pictures. We put the following verbiage in our listing to make sure that guests understand what they are signing up for:

“Our two large dogs are very friendly. We are willing to keep them out of the guest room, but they have access to the rest of the house. If you are a dog lover you will have a great time here. If you are uncomfortable with large dogs this listing is not for you.”

As you can see from our reviews, many guests are charmed by our dogs. 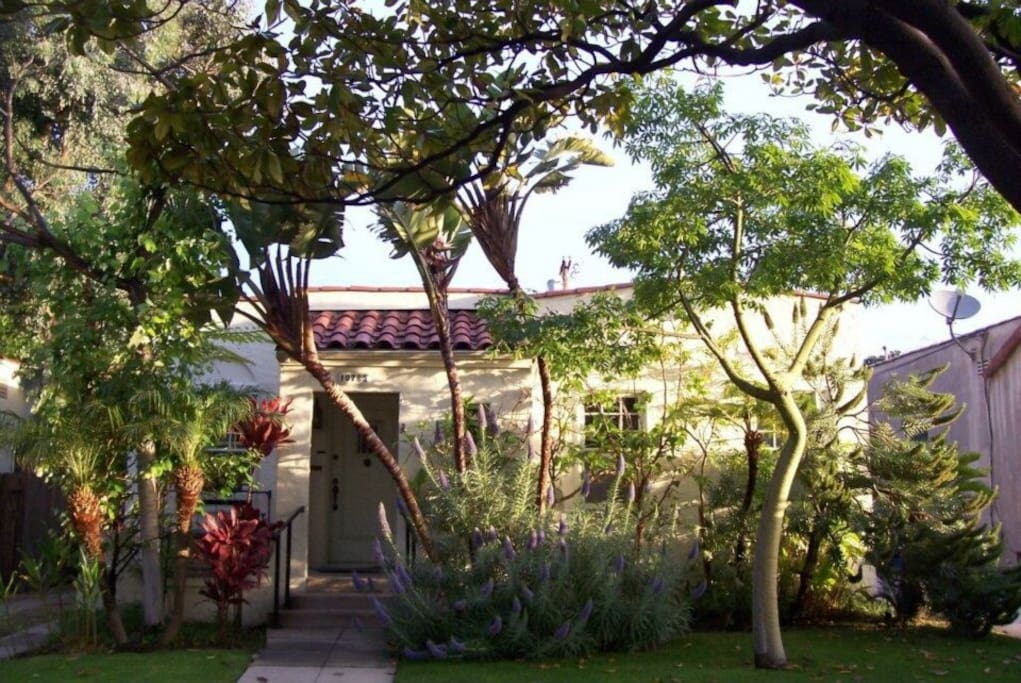 Private room in Los Angeles, United States. We have central air conditioning and heating through vents in the ceiling. Spanish style house in Palms, California has been in four films; originally built in 1926. Long/Short term rentals for one or two...

Your post is very timely. I have 2 dogs that love people. They also like to say hi to every Tom, Dick, and Hairy (intended) that walks in front of the house.

I make it clear in the listing that I have 2 dogs. And they love people but we’ll try to keep them away from you.

Typically, I let the dogs free roam the house. After all, the guests have been warned.

But there is still the chance that Butterball Zacky will bark at night - after all, some burglar might approach the house, and also after all, patrol is their duty as they see it.

And I’ve now been told that they bark every minute we’re gone until we get back again. I’m not sure which I hate more right now, being a host or my dogs or my 15 year old daughter lol. So many! (Temper tantrum here).

So here are my suggestions:

If only they had vibration collars for teens, that would be great.

And I’d probably avoid instant book. My current guest’s profile is all about quiet this, quiet that, and ‘I don’t want the dogs in my space’. No problem with the dogs in your space bit. And folks usually understate their expectations. So it was apparent that he probably expected even more quiet than he said. I got him through instant book, so the die was cast already. Were I not on instant book, I’d have declined, because I know I’d be stressed beyond belief. Which is what has happened.

Still, I put myself out there on instant book and accepted the reservation, and so I have to do what I have to do.

Also if the guests will have access to the backyard, make sure any poop is picked up, because they’re going to be picky about that too.

We have dogs and do doggie daycare so there might be 8-10 dogs here during the day and 4 through the night. The bnb suite is private - and kept pet-free, ironically. We started out offering it to people travelling with their pets, but the logistics of that were too complicated. We tell guests that our dogs may “welcome” them by barking, but one thing we ask in our house rules: Don’t ring the doorbell - communicate ahead of arrival or from the drive, where wifi extends and we come out to greet guests. We have soundproofing curtains over adjoining doors that don’t get used to muffle sound - someone stepping on somebody else’s paws in the middle of the night - that sort of thing. So far, so good.