we have been trying different sheets for our new Airbnb and not much success. Any recommendations from you gurus for high quality sheets that are wrinkle free and can be cleaned easily from hard stains such as silicone stains. please share the name of the sheets and where you buy them from. thank you hosts

This borders on an oxymoron: high-quality and wrinkle-free. I don’t believe that such a beast exists in a natural fibre.

It would be interesting to know what sheets you have tried, including the name of the sheets and where you buy them, and how you found them lacking.

Check on amazon I got some there for 35 bucks search nestl bedding, they are on sale for $25 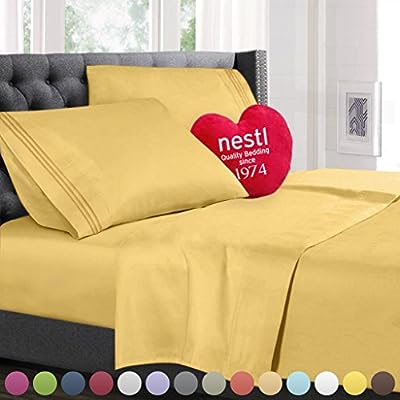 Not wishing to sound facetious, but isn’t the wrinkle free aspect achieved with an iron? If you find a way of circumnavigating this part of the process then please, please do share!!

No there are sheets that are non wrinkle. I got sick of ironing. The ones I got on Amazon are very soft and smooth right out of the dryer.

I got some off ebay that are 100% cotton sateen that aren’t very wrinkled, they are thin but soft. I like thin sheets because I have 1 and 2 nighters. If I were only doing laundry 3 or 4 times a month I’d get some percale. I don’t care for microfiber for here because it’s hot but it does dry quickly. They would probably be okay in winter and I need some deeper pocket fitted sheets for my new mattress.

I love my Target Threshold, I just bought these and they feel good, and pretty wrinkle free.

Now is a good time to buy sheets and towels. Many sales for kids going to college.

closest i found was quality seersucker material. i use them intensively for 2 years and they still look great.

I wish I could find the article talking about this, but a study of hotel guests found that they claim they don’t care about wrinkles providing they are 100% sure that everything is clean - which is also influenced by a modern and clutter-free room in general.

Among the things that affected that perception of cleanliness were white sheets and white linens that didn’t all match exactly by colour (ie if some were off-white or slightly less white). Guests were more likely to be happy with coloured linens and towels than with stuff that was “almost” white. They also prefer sheets that feel thick, regardless of whether they’re ironed.

I use a thick cotton sheet from Ikea that is called Lyocell. It feels starched and decadent, I’m not sure how else to describe it. I don’t iron them and they’re definitely wrinkled

I also went with light grey rather than white, although obviously that doesn’t withstand bleaching (so I have one that’s a very pale cream now… and breaks that rule by being off-white, so I will be dyeing it to some slightly darker colour).

I also fold the duvets and leave them stacked on the end of the bed so that the guests can see the bed hasn’t been slept in. So far nobody has complained or questioned whether the bed is clean. I get better overall cleanliness ratings since I began to do that, but ofc it might be coincidence?

Oh yeah, my husband and I have been looking at places to stay for an upcoming weekend trip. None of these condos look like they’ve been updated since the 80s and the mattresses look so uncomfortable. They wouldn’t even have to update the panelling if they’d just invest in some pretty bed coverings! Nothing less inviting that hotel grade bedspreads, ugh.

If hotels/motels really want to fight back against Air, they should simply update their bedding and mattresses and wash everything thoroughly!

So you have these and like them? That price is rather incredible!