Helping guests to help themselves

So I’ve just checked in an Italian couple; they’re here for her birthday. It was an exceptionally difficult check in as they spoke next to no english (no more than yes or no) so everything was via google translate.

A few days before check in I contacted the guest to check their arrival time and recommended that they eat while in central london. 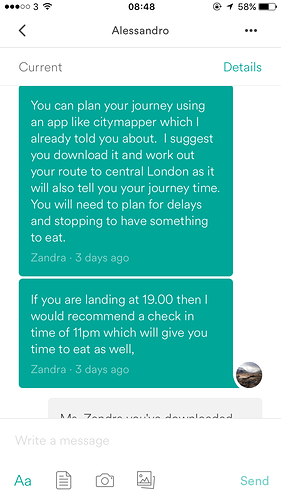 The guest replied saying no worries about food they want to come straight to the property. Meanwhile I have my difficult Christmas guests in my mind so I reply : 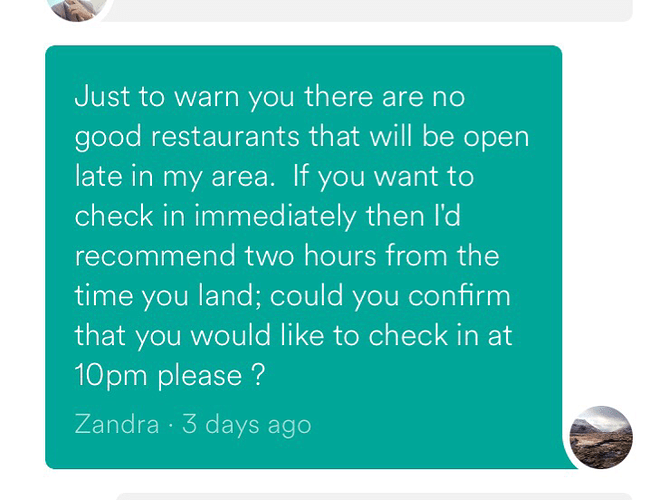 After the check in (at about 10.30pm), my guest says ‘so where is a restaurant we can eat in for dinner tonight?’. Note the female guest was having a birthday at midnight so this is meant to be a special trip.

I ended up making them organic chicken sandwiches with the fresh bread I’d bought earlier but all the while I was quietly fuming. Organic ingredients are not cheap and they’ve paid £32 for two to stay.

What am I doing wrong? As forum regulars will know this exact issue came up with the French guy who in his review complained about a lack of kitchen use. If you have any suggestions on how I can better handle this situation it would be great.

Why did they didn’t take a taxi?

For me you are doing way too much, and at least clients should had paid you for the food prepared.

they did take a taxi

in my opinion though taking a taxi is delaying a problem in London as you need Oyster cards to get around. You’re better off getting these immediately.

So I should have let them starve ?

Why did they didn’t take a taxi to a restaurant?

It was 10.30. We don’t generally eat that late here in the UK. From 10.30 most places that will be open are bars and they won’t be serving food.

There are places right in the centre on zone 1 that serve later but that’s a taxi of £30 to get there.

No possible to have delivery of food or place like pizza?

But why not just eat first like I suggested and then takeout wouldn’t be an issue! There’s no kitchen use in my flat and I don’t want people eating pizza on the white sheets

Maybe I should offer a late arrival supper package … what would be a reasonable price for this?

But why not just eat first like I suggested and then takeout wouldn’t be an issue! There’s no kitchen use in my flat and I don’t want people eating pizza on the white sheets

Maybe I should offer a late arrival

I think you can offer two solutions, clients take a taxi to a late place (and you can say how much it’s cost) or you can charge 10-15 pounds each for a late supper for this kind of time (or the price you seems corresponding to your time, the ingredients and tax).

As you know people are not reading information…

Or assuming I don’t really mean what I’ve written…I don’t really want to have to hold food on the off chance that they might want to eat something so I guess it will need to be booked in advance.

Perhaps just the mention of charging them for food in a check in message will make them more proactive in terms of sorting themselves out.

Personally I would given them menus for local takeaways - you mentioned there was a local Chinese and Indian I think ?

Alternatively offer them a late supper at an additional cost.

Where would they eat it though @Helsi? The kitchen is half of my ‘bedroom’ and I really don’t want to smell Chinese or Indian as I try to sleep. If I offered food it would be cold like sandwiches… and I don’t really want to I just want my room to myself at that time of night.

Was just trying to help

I think it’s not so many options.

It should be two solutions, you can offer a late supper for additional costs or clients needs to take a taxi to the city.

Haha yes I just expanded my answer to explain. If you imagine a small square the kitchen is one corner and the living room the other corner …of a room that is about 15m2. Its really very small and intimate …I normally section the whole area off with a screen from 8pm so I can get privacy as you can’t enter the kitchen without also being in my sleeping area. Hot food would be a no im the type that can’t stand food smells past a certain time.

Zandra, would it be possible to have a folding table in the room. I mean the sort that folds up from the wall so takes up no space when it’s not in use. (I think Ikea has them). You could then add two folding chairs (Ikea again) that could also hang on brackets on the wall.

Then you could have them in place when the guests arrive and demonstrate how to fold them away. It could be that guests would also find them useful as a desk or dressing table.

You could also have a rule of no hot food in the room therefore excluding Indian and Chinese takeaways. Our price point is very different but I always leave a welcome snack and this is always something I’d use myself if guests don’t use it. Maybe in future a cheaper option than organic chicken sandwiches would be bread, fruit and cheese which can make an attractive platter but is fairly cheap. It can look quite posh.

Why allow such late check-ins? “Check-in is between 4PM and 8PM inclusive.”

No House Rule about eating? “No food consumption in the apartment after 8PM”

If I remember right, English food laws are really touchy about hosts preparing any kind of food for hosts without a mess of licenses, training courses, inspections and the like, so watch that you don’t get caught.

Why not have your statements about “no food available” translated into French, German, Spanish and Italian? Should cost more than a couple of quid That way there would be no confusion, language barriers, etc.

Good ideas but sadly the room is too small. Wall one is totally taken up by the bed alone one side. Wall two is totally taken up by the wardrobe and the head of the bed. Wall three is a large but also low window meaning the window comes all but a few inches away from the floor. Wall four is taken totally by the foot of the bed and the door. Total size of the room is probably 10m2.

I think you have a point. If I limit check in time then I also guarantee they are here in time to go out again and eat.

Doesn’t Airbnb or it might be the browser automatically translate pages? They did for me the whole time I was travelling .

Yes, assuming I don’t buy my usual organic cheese. I spend a lot on food but I actively meat reduce (so for example I will buy an organic chicken at £20 but that’s my meat for the whole week and I will use it in a variety of ways including the carcass to make a soup).

My price point is so low that even providing bread and cheese will take £5 which I can’t absorb easily of I’m charging £32 for a night.

On reflection I think I don’t want to offer food, my place is just too small to entertain like that and if people are paying they become judgmental. Yesterday I offered my guests cheese and they said they didn’t like it so that’s how they ended up with some of my chicken.