Has anyone ever seen this? It's on the app only (iPhone) not on website. Says I'm missing Essential Amenities!

This is the first time I’ve seen this. This came at the bottom of a five star review and nice comments & “compliments”. Again, this is only visible on the app! She reviewed the day she checked out. There were two people here for one night. (Booked for two nights but had to leave early) They had:
4 Large bath towels
2 hand towels
2 wash cloths
Contacted guest immediately about the lack of towels–I was horrified! I thought maybe I was losing my mind and forgot to give them any towels. She said, “oh heavens no! We had plenty of towels! Did I do something wrong?”
Luckily I don’t see it posted anywhere publicly. Ideas anyone? 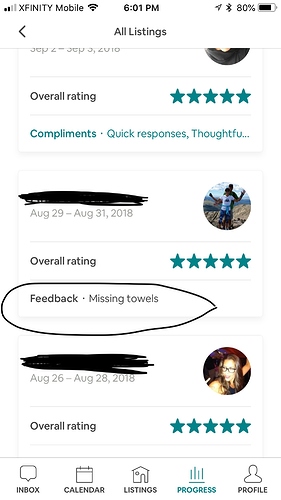 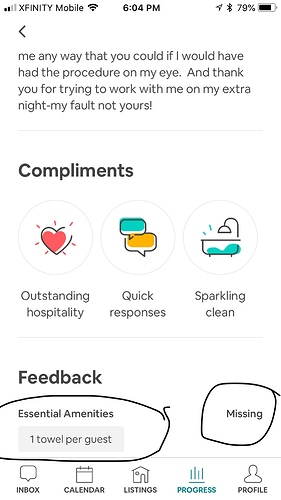 The new review system is a shitstorm. You’re lucky she actually reviewed at all. i used to get steady 80% of guests reviewing. It’s dropped to 50% since Air introduced their survey-style review system.
It was discussed on here not long ago but I can’t find the thread.
It’s 10 pages long and asks all kinds of irrelevant stuff. Many guests give up half way through.

Your guest was responding to a yes/no question on whether there was one towel per person.

Welcome to the new sophisticated Airbnb that is wholly in tune with it’s hosts and it’s product.

The new review system is a shitstorm. You’re lucky she actually reviewed at all. i used to get steady 80% of guests reviewing. It’s dropped to 50% since Air introduced their survey-style review system.

Yes, I read about it here, awhile back and also on the ABB “Community” forums, about the new 10 pager. (I can’t find the thread either.) With some guests that I’ve developed an especially good rapport with, I’ve been asking if the review was easy or if it was 10 pages, I think there were four, maybe five of them I asked and they all said it was the short form, so I assumed they hadn’t rolled the long one out for me yet, or were just testing it on a small group.

So since she received 4 towels, she answered “No” to the one towel question, LOL.

What a PITA that new form must be! I wonder if all my guests are getting it? Or just a few. I have at least 90% of guests reviewing, (mostly due to my “pandering” on my check-out letter (also thanks to this forum, it’s been really helpful!) I wonder if that’s going to drop off now that I have this wonderful new form! Sigh…

So since she received 4 towels, she answered “No” to the one towel question, LOL.

Oh ffs!! She was being logical. It’s the incompetent asswipes at Airbnb at fault. It’s funny, some people are accusing them of stealthy and sneaky practices. Honestly, I think it’s increasingly clear that they haven’t grown up yet and don’t know their arse from their elbow. Usually such incompetent businesses would fail but somehow the idea flew and so we must all follow in the big blue sky with all the birdies…

Oh ffs!! She was being logical.

Hahaha. I think I just figured out what ffs means all on my own! I’ve seen it here before, it must mean for f**ks sake? Awesome, I’ll start using that so I can swear a bit.

don’t know their arse from their elbow

Clearly! Where can we let them know how stupid this form is? People here have said twitter is good. I have an account but don’t use it or tweet. But I will…

I’d love to let them know that they are confusing guests, getting less guest reviews overall, and that I provide essential amenities and then some! Sheesh. I wonder how all these dumb questions factor into host rankings. Thanks for clearing this up for me, I was stumped.

While we’re at it. Why does that silly window at the top of the listing say "XX amount of recent guests have said…“Sparkling clean”. My XX number should be tripled, according to the data on the app. Really really a dumb addition to our listings, and inaccurate at that.