A future guest has received two old messages from me on our current thread. The first - a simple ‘I’m sorry that room is taken’. The second ’ great - I’ve booked FeieFei into room with desk for two people’.
These are messages from at least a year ago - maybe two.
So Barbara from Hungary receives these and messages me to say she’s booked somewhere else. I knew nothing until this point apart from an Airbnb text message regarding an unknown command a few days ago which I just took to be a glitch - post snoozing my listings.
What do you guys reckon? Who do I contact and how? The guest is now booked in two places and I don’t want to just cancel the booking but she’s out of pocket until I sort this. 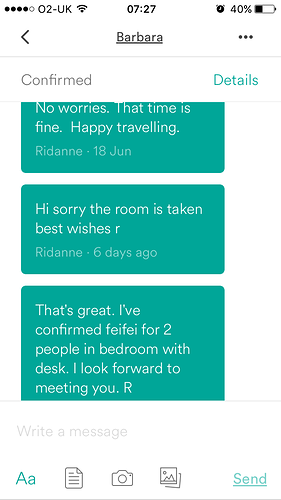 How about Airbnb Customer support?

This happened to me recently, too. I got a message from an old inquiry that didn’t really go anywhere. Out of the blue them messaged me to say that their plans had changed. I figured that somehow Air had a glitch and resent an old message.

Come to think of it - I do believe I had just snoozed our listing because it wasn’t showing up in a search and I was trying to reboot it.

I contact Air about the latter and it’s still not sorted after 2 weeks / 2 reps.

I had exactly the same last week, a message from a guest who booked and stayed two years ago, the message said they were looking forward to their stay in September. I had no record of a booking, I messaged them back and they said they hadn’t made a booking, they didn’t know why I had got the message from airbnb because they hadn’t requested to book etc we both assumed it was a technical glitch.

I would just call them first thing.

Interesting. Seeing as this is the guest who has received old messages and been inconvenienced we’ll see if they respond more quickly.

Thanks @Astaire - appreciate the time.

[quote=“CanadianHost, post:3, topic:16976”]
latter
[/quote].
So for info. - they have resolved this within three hours or so - tweeted apologies to me. Cancelled the guest’s booking with me and refunded her fees and apologised to her. She’s retained the four day booking with new host. My ‘dedicated’ case worker emailed to say this had been done and that she was putting my calendar dates back available and closing my case. I have yet to see if an automated cancellation notice appears on my reviews. The guest comes first. And I’m glad that’s resolved but oh what joy to be a tiny cog in a big machine.

Thanks for the update! I’m glad they’ve resolved it, but it shouldn’t have happened in the first place.

This also happened to me a couple of weeks ago. BTW what does “snoozed our listing” mean please??

BTW what does “snoozed our listing” mean please??

None of my guests have received ancient emails or messages, however, this morning I received a payout notification. This is the same payout that I received on Saturday. Same guest. Same amount. They are still here [and sound asleep.]

Not sure if I should ask them to check their credit card or not. I suspect that this is another “glitch”… as any software developer will tell you, long holiday weekends are a good time for bugs to find their way to the surface.

Not sure if I should ask them to check their credit card or not. I suspect that this is another “glitch”…

I would not alarm the guest as it’s probably a glitch. I’m sure they’ll notice if they are double charged and will take it up with their cc company.
Don’t risk losing your payment

Why would talking with them [which I won’t do anyhow] risk my payment? I don’t see the logic here.

They may start a dispute with their cc company which could hold up your payment. I just wouldn’t worry them. If you get paid twice I would take it up with Airbnb not the guest as you are not in control of the payment system. I doubt anything will come of this.
This weekend I had a notice to leave a review for a guest I had already left a review for. They left a review for me but neither was showing up. It took a day before the notification on my dashboard went away.
Bottom line I agree with you, holiday weekend, under staffed with higher level staff off.

BTW what does “snoozed our listing” mean please??

It is an option in your settings for your listing to be “Listed”, “Delisting” (or maybe Unlisted), or “Snoozed”.

So maybe you’re going away on vacation and don’t want to have to reply to requests for a stay, you can “snooze” your listing so it won’t show up in a search for that time.

EDIT: Sorry, I just noticed that @Maggieroni replied to your question.