Controlling Behaviour? Am I becoming neurotic?

Lately, I’ve started going into the guests room to check everything is off and that there’s nothing I need to be worried about damp wise.

I’ve been finding the electric blanket left on and so much damp on the windows it’s running off the windows in a river. It’s problematic because I have wood windows and window sills. It tends to happen when guests wash but don’t dry their hair (i also find it unpleasant thinking about wet hair on pillows but I try not to think about that too much. No need by the way as I provide a good hairdryer).

Lately I’ve been noticing guests wet items on the window sill (e.g a wet facecloth or socks they’ve hand washed in the sink. I remove them or place something under them that won’t allow further damp to penetrate the wood). I then open the windows to remove the damp air. This is far from ideal as my flat is heated via storage heaters and once it’s gone it’s gone. No more heat until midnight. I’ve removed the electric heater as someone left it on once and I realised it was a huge fire risk.

Today I found a load of dripping wet washing hanging on the back of the wood door, dripping directly onto the wool carpet. I removed the washing immediately and placed it in the bath. I also messaged the guest explaining the flat is too small (and the weather currently too damp and cold) to dry anything and that her wet clothes have been placed in the bath for her return.

These things convince me to just carry on with my daily checks…but is there a chance I’m overreacting and being over controlling ?

Do you also disclose in your listing that you will go into their room while they’re away and move their stuff around if not to your liking? Goodness, who wouldn’t want to stay there?

That neurotic, contoling behavior of yours, as you put it, is not good for business and not good for you. I only see two options here: you either do something to get the humidity problem under control (buy a dehumidifier for crying out loud!); or you factor in the cost of replacing that wooden window for something low maintenance like vinyl. Sure, it won’t have the charm of the wood, but it’ll mean peace of mind for your guests and for you.

Also, if your guests are continuously leaving wet laundry around, that is clearly a need that’s going unmet. I’d add a rack or a clothesline in the bathroom.

@romaga. I don’t offer laundry at my flat so offering drying facilities is not an unmet need - I actually ask them to go to the laundrette where I too dry my clothes. Guests washing clothing in the sink and then hanging it to drip dry in a room not designed to cope with that seems unreasonable to me. I don’t mean dry wet from the washing machine, I mean dripping wet leaving a pool of water penetrating the carpet.

I’m not sure replacing the wood windows sills and wool carpets with waterproof items is an option.

And yes I tell them in the house rules that I need to access the room daily once I realised that the electric blanket was being left on for 24 hours.

Trust me I’d rather not have to go in at all.

Yes, you appear to becoming neurotic/paranoid. Stop it by attending to the basic problem – a room/house sealed too tightly, and not being FIRM with gust who violate house rules.

Does the bathroom not have an exhaust fan?

Yeah going into the room will get you in trouble!
I just read an air review of a host from a guest who secretly left a camera in the room and recorded the host going into their room and threw an absolute fit and mentioned it in the review.
That’s probably he end of that host’s booking.

If it’s a repetitive issue then you probably need to think of some solution eg getting a dryer in or something.
If it’s a recurring issue and your place doesn’t really allow for air drying then probably a good idea to look into a dryer!

Have you seen how tiny @Zandra 's place is? I am going to guess that the entire apartment is not much more than 400 sq ft total and it is filled with stuff. She sleeps in the living room and gives her bedroom to her guests. There is no room for a dryer, a drying rack [though, I really think she needs one, she doesn’t], and much of anything besides a bed in that room.

At first glance, it sounds a bit neurotic. But…

London flats are notorious for their ventilation issues. I don’t think many visitors would really understand. I live in one flat where we had to have two additional vents installed because it was just so humid from general living. Could you put in a dehumidifier?

I wouldn’t provide an electric blanket for fear guests would leave it on. I would probably check this if it was in my house too.

Do your guests know you’re checking their room daily?

Yeah as @smtucker notes my place is tiny ! And … the bathroom has no window just a large, very noisy fan. No room a dehumidifier there’s not even the floor space. There’s no floor space for a drying rack either and like I said, I don’t even dry my own clothes in the flat.

My place is weird that it runs off storage heating which is underfloor and cannot be controlled. It goes on at midnight and stays on until 8 am after which it slowly releases heat (so is the theory anyway).

So it can get very cold by the evening and I can’t do anything about it aside from provide an electric blanket. This is worsened by the fact that I need to open the window to remove the damp air - basically the storage heating isn’t lasting as it should.

And yes after finding the blanket being left on I have no choice but to check its off. @Ash953 it’s in the house rules. I also make the bed daily to make it VERY obvious I have been in …

@AquaticQuests a drier isn’t an option. Just to explain how small my place is… I don’t even have a freezer, I have an icebox. The total amount of frozen food I can buy and store amounts to two packets of fish fingers.

It’s funny to hear you describe it that way

Most people walk in and say oh wow it’s so cosy! But agreed it wouldn’t appeal to a minimalist.

Well, if you tell them that you’re going into their room, and checking on them then that’s what they sign up for.

I would just stress to them that they are not to do what they’re doing because it damages your windows, etc. If they break the House Rules then they risk losing their accommodation.

ETA: I definitely understand the struggle, and I have a lot of sympathy.

@Ash953 it means a lot that you’ve lived in a London flat and know how damp they can be. I’m really lucky there’s no sign of mould or mildew but there would be if I wasn’t so on top of keeping it as dry as possible inside.

And yeah for people who don’t get it, it does seem entirely like im a crazy person.

My current guests like 30 minute showers each in the morning and evening… and the flat just can’t cope with the humidity being generated. I’m having to open the front door at the moment to provide ventilation… I’ve been trying to avoid telling people how long they can be in the shower but it’s starting to cause problems …

I don’t think you are becoming neurotic. You have justified nervousness about your guest’s behavior. As long as you are clear about going into the room during their stay to check then it’s on them if it bothers them.

Have you considered buying a towel heater to install in the bathroom? It could help dry the bathroom and damp clothes could also be dried on it. The best would be installed on the wall but those are expensive and you’d have to have wiring done too. But this is affordable if you have the floor space.

I actually have one of those in my bathroom BUT my electricity is an off peak night rate (again I have no control over this and I can’t change to another rate as it’s done through the management company). If it was on between 08.00 and 00.00 it would be expensive to run as I pay a considerable premium for electricity during those hours. It’s too complicated to explain that to guests plus I would prefer the small bathroom wasn’t littered with wet clothing.

I honestly don’t see any solution except to go in their room and police them. This reminds me of the problem you had staying in the warehouse in LA, no solution is going to be available and you are just going to have to suffer one way or another.

They make bathroom fans that have sensors, so they will run whenever there is too much humidity. Also, they make retractable line that you can attach in your bath/shower area so that if people feel the need to hang something to dry, is hanging over your bath/shower drain. Hotels sometimes have these: 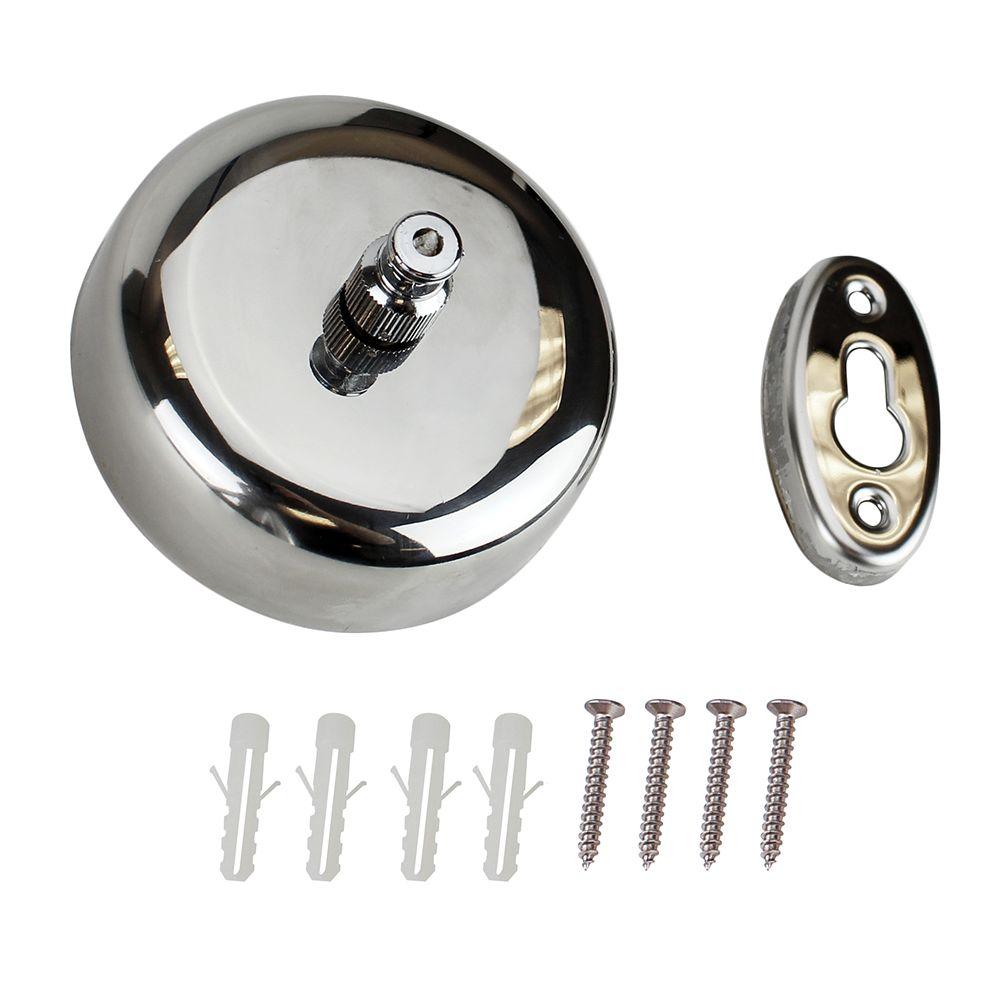 The single clothesline classic retractable stainless steel dryer takes up very little space on the wall and comes with 8.5 ft. of drying line. The attractive finish and stainless steel body will last

@KKC Actually you gave me an idea …an over the bath drying rack ! Fitted against the wall and that can be pulled out when needed…

Don’t remind me of that listing in LA. I’m still warning people who mention they’re going to LA not to book with the guy.

Also, while I am not a fan of electric blankets because of the safety factor, they do make electric blankets that have an auto shut off feature. Oh, and I know there are a few different products out there that are window sill protectors.

Darn. I thought the towel bar was a good idea! I can sympathize on you with this point - we also have off peak electricity rates. It can be challenging.

I was going to suggest one of those tiny retractable clothes lines, but that would still be contributing to your humidity issue. Maybe you can give them a token/quarters/coupon for your local laundromat? Adjust your nightly price accordingly, of course.

For the electric blanket, would you be able to put it on some sort of timer, plugged into the wall, that would shut off the power to it at a certain time? Of course the guest would see it, and could always override it. But at least this would help with the “forgetful” guests…

The only other thing would be a sign either on the bedroom door or nearby, saying something like “please remember to turn off/unplug the blanket before you leave. Thanks!”

Edit: @Asheville found exactly what I was envisioning. Thanks!