Generally my white towels and linens stay pretty bright looking (especially since I started providing makeup remover wipes) but I noticed at one of my properties that my towels are starting to look a bit off-white. I’m no laundry pro - does anyone have good tips for giving white laundry a lift? Soaking overnight in a bucket of bleach? Hanging out in the sun? What works easiest and best?

We always wash our towels apart from other loads and add something like Glowhite or Vanish stain remover along with the detergent.
Not a good idea to soak in bleach - it can damage the fibres and also return them to their natural off-white colour.

I ask the cleaners to spray any stains with Oxiclean but it seems like they don’t always do it. And now the towels are looking a bit dingy. I will probably buy grey towels next round but I’d like to get a bit more life out of these if I can.

I wouldn’t buy grey towels. Various skin products will stain or bleach them. Nice towels are $7 each at Costco. When you are no longer satisfied with your old ones appearance just get new ones and use the old ones as rags or donate them to your local Humane Society.

Ok thanks Dusty, I will try that!

I second that recommendation.

I’m also a huge fan of Mrs. Stewarts blueing - can buy on Amazon too. Oxiclean added to the detergent helps on a regular basis too.
Bleaching doesnt work great for me with the really hard water, it ends up yellowing my towels, especially if they got sunscreen on them.

Ordered bluing on Amazon! Good to know about bleaching and hard water, ours is hard here too.
Will do some testing with my towels this week once I receive the bluing and report back!

white towels are the best decision I ever made! If there are any stains I just soak for a few hours in vanish oxi action (the powder) and then wash normally afterwards, putting a bit more powder in with the wash. They come out like new! Admittedly I’ve only been doing this for a few weeks now (before that I had coloured towels) but it’s doing the trick so far.

I have two sets of white and one set of grey. I bought the grey on the advice of someone who said I was mad to use white. Well the grey looked old and horrible within weeks and the white have stayed white. I wash with bicarbonate of soda or soda crystals in each wash.

We don’te pretend to be a Big Box Hotel, so we buy towels in colors which compliment our decor and color scheme.

Those of you who have problems with guests using towels to scrub off makeup – do you not provide wash clothes for that purpose? Or are you just providing towels?

I use yellow towels and rotate them into my bath if they get shabby. I go Oxiclean in every load…it separates into peroxide and soda…two of the best, gentlest cleaning products out there.
White towels can be purchased very inexpensively by the dozen from restaurantsupply.com or any other hotel supply company.

I soak in Vanish for 3 hours and my white towels are still lovely and white, I did buy good quality towels and if they have stains I spray with Oates Citrus Clean. I think bleach will ruin them, I have used peroxide for a stain that I didn’t know what it was and that worked.

Vanish works great for my towels!

I do provide wash cloths. We had a guest ruin a towel when she used it to keep her hair off her face as she was using a yellow tinted face mask. The same guest ruined a sheet as she uses moisturizer that contains fake tan. The same guest had a bottle of makeup break in her purse which was sitting on the bed. We were able to get the stain out that time.

We once had a member post here who sold the soaps to hotels to treat their towels. Industrial strength stuff. Wish I could remember his name and advice he had.

Napisan, - or whatever is used to whiten cloth nappies. Soak overnight and wash towels in hot water. There is one that’s good for coloured fabric too Don’t know if you can get that type of product where you live. I have coloured towels to avoid the problem you’re having. I purposely don’t have white towels or linens as that’s what would be used in a hotel and my place is part of my home. 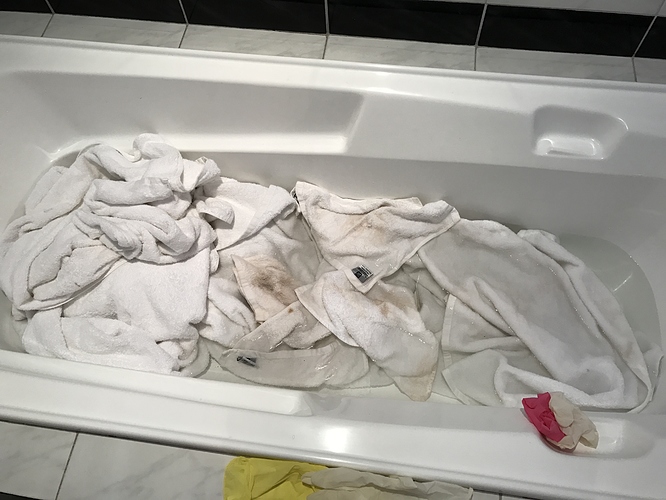 This is half of what my 7-day stay guests left with me. There was another half I dealt with a few days ago (they requested a towel change back then). The other half was worse but I didn’t take photo. Only about 3-4 towels don’t need bleaching. For the other half, after bleaching, there are two still need further treatment and it is possible these two cannot be saved.
I used to complain about some guests stain 2-3 towels, but I feel thankful now as they only stained 2-3 and the stains were treatable. Lol.
Can any host who has been hosting for a long time to suggest whether it is normal/rare/extremely rare for what is in the photo? Thanks.

I have NEVER had towels that look like this. Well, I have had personal towels that looked like this after drying off a dog who frolicked in something disgusting, but that is a different story and we used old rags. What in the world did they use these towels to do?

I have no idea! It is truly disgusting to deal with and they smell terrible I had to wear a mask. The other half was worse than this so I think this is routine for those guests. They are also disrespectful in other aspects. Btw the stains may look like dirt or soil in the picture above, but it is not soil, they are orange. Many bath towels got a few orange stain, and the hand towels are full of orange stain. Can anyone suggest what are those?