Can't work out if Tick or Cross

I can’t work out if I should select the tick or the x. 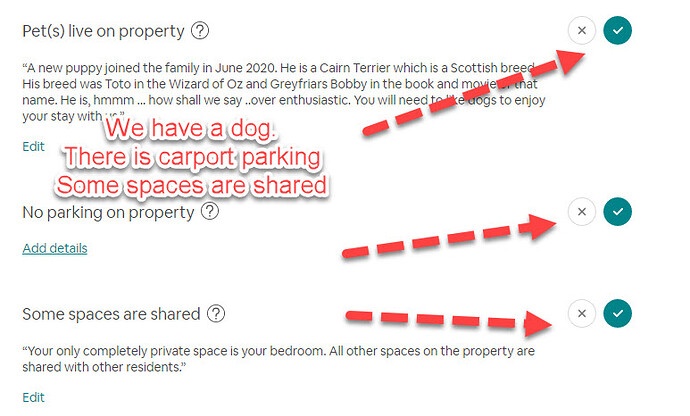 I believe X is off and tick is on, but you’d think that they would use a more universal pair of symbols.

It’s not the symbols themselves. The question/s is/are in the negative. Seems weird to me.

The “no parking on property” drives me nuts. I honestly don’t know why they have to make it so hard.

why they have to make it so hard.

I love geeks but they are not known for communication skills. Airbnb needs REAL end user testing of every change they make. But like so many companies until it hits the profit, they won’t notice

As a geek/nerd/techie these things for QA drive me nuts. I just ordered brake parts online for one of my cars for curbside pickup (they come out and put stuff in the trunk/boot).

When the order was ready, I received an email that stated “your order has been picked up.” I called in a panic thinking that someone got my brakes (yikes!) and the poor guy on the phone at the store said “Yes, this happens all the time, people think that their parts have been picked up by someone else.”

I suggested he tell corporate. He hung up.

The techies who write this stuff have brains that don’t work like the average person’s. As Annet says, they usually don’t have good interpersonal communication skills. Many have Aspergers or some form of autism- they are attracted to tech because they can work alone.

It’s like the prep time wording that confuses many hosts. One day prep time says “Block one night before and after reservations”. That seems to the average person that 2 nights would be blocked- one after booking A and then the next before booking B. Nowhere does it explain that the night after doubles up as the night before. But that is exactly what it does. So why doesn’t that setting simply say “Block one night between bookings”?

@JohnnyAir- Tick on pets, x on no parking, tick on shared spaces.

LOL! More of the same Air bs. They would only surprise if they did anything properly or logically!