Bleach marks on my linen!

For an old fashioned solution to yellowing whites =
http://mrsstewart.com/

sorry for repetitive…I see it was mentioned above.

Welcome to the 20 Mule Team Borax online. Here you can find borax offers, its many uses, and where to buy it!

I asked for half the cost because I am generous and the bedding was over a year old.

Sorry but the Oxyxlean and blueing categorically did not get my stuff white, I promise.

Sorry but the Oxyxlean and blueing categorically did not get my stuff white, I promise.

Are you talking about 100% cotton towels/linens? If a blend, no, those won’t work but you probably know this. I had a "self tanner/bronzer incident that I had to reluctantly use bleach on Egyptian cotton towels and white Percale sheets. Towels have never been the same but it was necessary. Otherwise, just for slight yellowing of my personal whites (and now guest whites) the Oxy and blue stuff works great, for me anyway.

Yes, wouldn’t buy anything else.
Even bleach wouldn’t get the towels white, so I dyed them.

@Jess1, like you, this season, for the first time in 3 years, I had a guest ruin a set of sheets, pillow cases and two towels.

If the linens had not been nearly brand new, I might not have charged the guest for them, but since she was the 2nd person to use them, I did.

She was honestly clueless, as she uses white at home. She saw the orange stains, but didn’t mention them to me. I opened a resolution case, saying that she must use a BP product. She admitted she did, admitted she noticed the stains, aplogized and paid up without complaint. I left her a glowing review.

The difference here is that your guest knew, whereas mine didn’t I would follow the advice of KenH. Since she knowingly did it to you she may do it to another host, so review accordingly.

With regard to the poster who mentioned guests using these type of products might feel “trapped” in an Airbnb that doesn’t have white linens, could they just not use the product while they are there, or wash it off or something? I don’t know, I’ve never used the stuff.

admitted she noticed the stains,

Bingo! Same as my guest. That means they both knew. They were both dishonest for not telling us.

guests using these type of products might feel “trapped” in an Airbnb that doesn’t have white linens,

It is 100% the guests responsibility to ask for white linen. How on earth would hosts know otherwise? The sick thing is I could have prevented the whole problem if she hadn’t kept the damaging products a secret.

I have received a payment and an apology from the guest. I said for her to come back and I will use white linen (she works at a nearby hospital sometimes).
I saw an online article by Proactive where they were advising customers to use a white towel or pillowcase. There should be a warning in bold on the packaging.

Regarding Oxyclean, Mrs. Stewarts and Borax for whitening items: I feel that none of these products can preform miracles on already dingy whites so I use it from the start. The only product I’ve found to really whiten something that is old and dingy is bleach and even then it takes multiple washings. YMMV.

@Jess1, I honestly did believe my guest didn’t know. Indeed, she did see the stains, and did not mention them, but she seemed to honestly be puzzled by them and have no idea that she caused them. Maybe I am naive, but she was very sweet while she was here, and she paid up without blinking an eye.

Ah so she saw them but thought they were there before. That’s strange. Imho companies like proactive should put big warnings on the packaging. I think people find it staggering something like that would be sold.

Regarding Oxyclean, Mrs. Stewarts and Borax for whitening items: I feel that none of these products can preform miracles on already dingy whites

I agree. I switched over to white towels and sheets years ago for myself (though I still have colors as well for personal use.) I have used Oxyclean with every wash for the last 15 or so years and have no problem with dingy whites, except when I’ve had to bleach them. I think repeated bleaching will start to yellow the whites for sure.

I had a string of room mates on and off over the years, and my colored towels were always showing up with bleach stains. I always just thought they (roommates) were careless with cleaning products, or there was a problem with my washer or the towels themselves… Thanks to this forum, years later I now know it was due to the acne products. Two of my roommates I know for certain used Proactive.

I bought some blue towels and sage towels early on thinking that it might be nice for guests in the same party to be able to have different colored towels to be able to distinguish one person’s towels from another in the bathroom. Dumb move. Blues were destroyed by the acne products, so everyone gets white towels again!

I used Rit brand to dye Thanks @Stagestop to get the towels back to blue. Worked like a champ. BUT, after several rounds of laundering with different techniques (add salt to the bath, e.g…) I still can’t get the blue dye to entirely set. They are still bleeding the dye! Any suggestions on this?

Salt? Use a colour catcher sheet in the wash subsequently? Dylon dye instead.

Salt? Use a colour catcher sheet in the wash subsequently? Dylon dye instead.

Rit website and others recommend using a ton of salt. (Vinegar if dying nylon or nylon blends). Yes, I’ve used a box of color catcher sheets almost. Never heard of Dylon? Is that the brand you used for the beige?

Dylon is the market leading machine dye in the UK. I don’t know if you can get it with low postage elsewhere. I have found it colourfast.

Thanks @Jess1 I’ll look for that for my next project. Towels look great so hopefully eventually they will set before they fade.

As far as the make-up/tanner/bronzer/foundation/mascara all over white towels, I have found this to really help a ton (and much less towel usage now that I offer hair towels.) 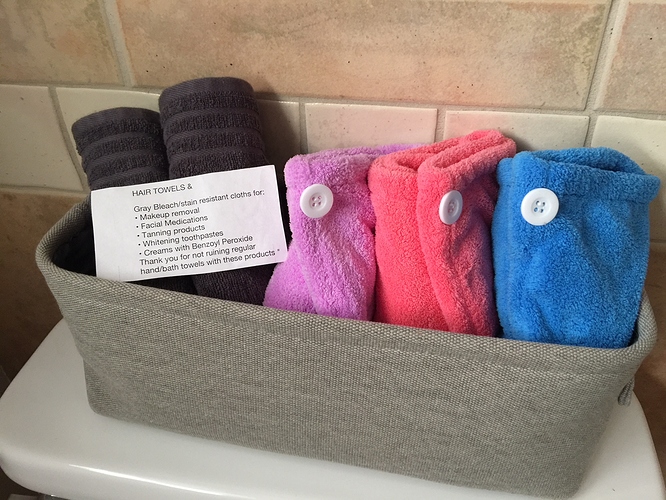 (Do I ever tire of talking about towels/sheets/laundry?) My friends and family think I’m a kook!
These oversized wash cloths I found are actually softer than salon towels, I snagged a couple for myself! 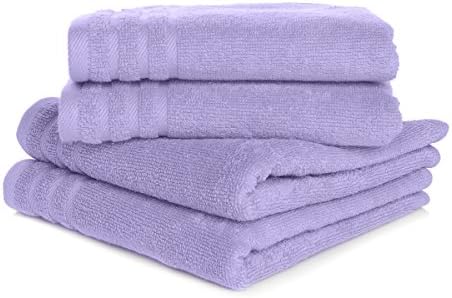 When I started Airbnb they just got what I had on hand. When I started buying special for the rental I got white thanks to reading this forum. To me white says “professional,” even hotel like if you want to put it that way. Colored towels say “staying with grandma or at a friend’s.” It’s more “homey” and if that’s the vibe you are going for, colors are great. For practical reasons, white is the way to go.

I use Oxyclean regularly as well as other products designed to restore whites. I only use bleach if I know or suspect the guest has been sick.

To me white says “professional,” even hotel like if you want to put it that way.

Yes, and they say “clean” and “crisp” as well, IMO

thank you for this post! one of guests bleached my sheets and I could not for the life of me figure out what might have caused it! it was on the pillows!

i went white after that for the sheets. doesn’t help on comforters and shams thought!