Be wary of scammers during this difficult time

It’s been a difficult month for all of us. I’m sure that due to COVID-19, we have had our bookings refunded and future bookings cancelled. There are now over a billion people in quarantine and the travel industry is practically non-existent.

It has come to my attention that there have been people that could prey on us hosts with scams and other alternative ways to make money. Please be mindful of these schemes.

If you notice anyone posing to be asking you question for “research” purposes or sending you offers for you listing(s), please be careful. Please report any scammers or any suspicious activity to us moderators so we can tell the community about it.

I know the pain might be there for a little longer but the last thing we need is more suffering. We will get through these tough times.

Guests look for places without camera and self-check in. They book the STR and check in but then they request a refund from Airbnb say that they cancelled do to COVID-19. Airbnb is refunding the money even if the host says that the guests did check in and send them pictures of a used STR. Without cameras, it’s really hard to prove.

People are just so sleazy.

If that’s happening it’s terrible but I’m sorry, the host has responsibilities. Every host who isn’t onsite needs to have a camera, smart locks and other things that they can use to prove a guest was there. Some people just don’t learn the easy way.

I agree. The other forum I’m on has lots of newbies. I something cringe when I see their questions.

I something cringe when I see their questions.

I had to leave the Rover dot com (dog boarding app) facebook forum months ago. The 22 year olds who didn’t know the first thing about dogs, couldn’t think their way out of a wet paper bag and then got defensive when challenged drove me nuts. I wanted to help but it was like bailing out the Titanic with a teacup.

LOL. I also do Rover but haven’t had a bark in quite a while.

I’ve been told of another scam for those of you on other platforms but not on other forums or facebook groups: 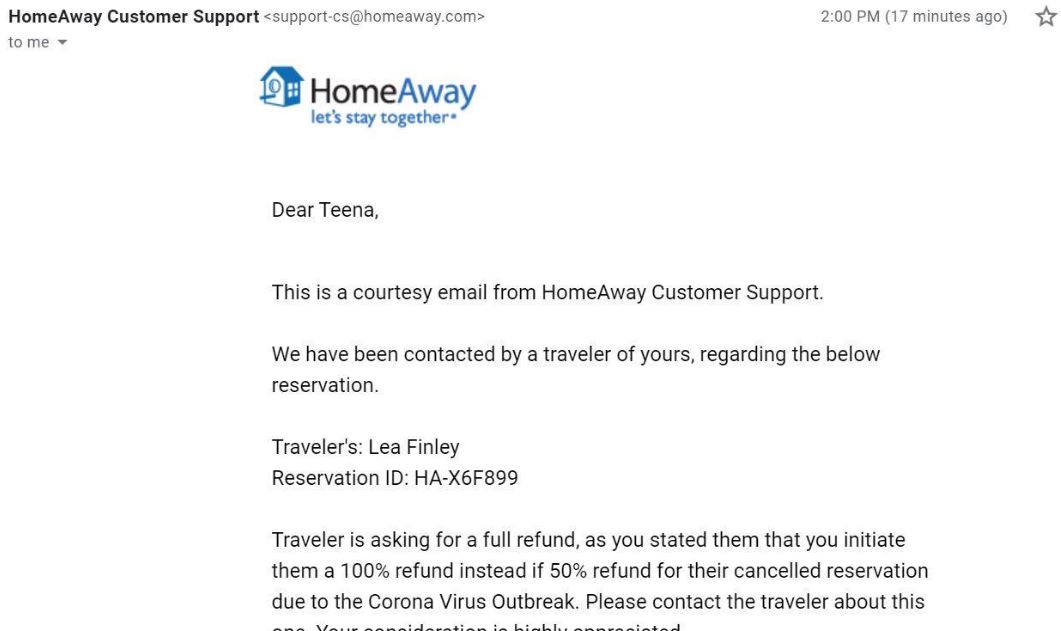 Phishing emails are being sent that look like they are from HA/VRBO but they aren’t. Read carefully and double check the names if you have a lot of bookings/cancellations and aren’t paying attention.

The 22 year olds who didn’t know the first thing about dogs, couldn’t think their way out of a wet paper bag and then got defensive when challenged drove me nuts.

Oh, but that’s because they somehow know vastly more about everything than you possibly could. Did any of them retort “Okay, Boomer.”? Which they all think is ever so clever, completely oblivious to the fact that it makes them sound like some snotty 13 year old. But then, I think 22 is the new 13.
Had an interesting phone call with my daughter who lives in Toronto today. They actually started stocking up on non-perishables a couple of months ago, simply because they realized that if anything really bad happened, even a tornado or earthquake, it would probably be wise to have at least a couple weeks worth of stuff set aside. Then the coronavirus reports started to get serious, so they bought more to add whenever they went out. They aren’t hoarding 12 giant packs of TP or anything, but enough stuff that they could survive for 2-3 weeks on it if they need to.
One of the biggest challenges for them has been their wayward 16 year old (the 18 year old is steady Eddie and taking her uni courses online). She’s always been a challenge for them, as she’s severely ADHD, and now that she’ a teenager, it’s a double whammy- she’s always out and about, and they are constantly having to track her down and bring her home. When my daughter explained to her that she couldn’t go out anymore (a few days before official orders, but the family was already self-isolating and working from home), my granddaughter had an ongoing meltdown for 2 days because her friends’ parents were still letting the kids go out. So they told her that fine, if she wanted to stay somewhere else, they would work it out with the other parents if they’d have her, pay for food, etc, but that if she made that decision, that she wouldn’t be able to come home again, they wouldn’t let her in until there was an all-clear, which could very well be for months. She settled down after that, and a few days later lockdown was official and all her friends were sequestered at home as well. Of course they all think it’s unfair and boring.

As people have thought time immemorial. We agree on many things but I have zero interest in youth shaming. It’s lazy and predictable.

As someone who either was young or worked with the young I find the stereotypes about youth to be like all stereotypes: maybe useful with groups, completely useless with individuals.

Didn’t mean to paint all young people with the same brush. The young people I know are wonderful- respectful, hard-working, socially and environmentally aware, working and volunteering in ways that lead to the common good. I’ve had many of them as guests. It’s the ones who we see having spring-break bashes in the midst of a pandemic and who respond to anything someone over the age of 50 might have to say with “OK, Boomer”, who I was referring to.

I’ve had many of them as guests. It’s the ones who we see having spring-break bashes in the midst of a pandemic and who respond to anything someone over the age of 50 might have to say with “OK, Boomer”, who I was referring to.

Those knuckleheads are a tiny proportion of their total numbers. So we all need to put our broad brushes away at the back of the drawer.

As an aside, I had a Trumper kid (I don’t know, maybe he’s 28 now) on facebook today say “ok Boomer” to me. He went to the high school I taught at but I honestly can’t remember if he was my student. The gist is I was saying “No we don’t need to open for business in 2-3 weeks.” And in the exchange he said “Ok, boomer” to me. My reply was “come say that to my face in 6 months. I’ll meet you at your choice of hipster bars.” LOL.

Anyway, we are well off topic here and though that’s generally fine this is a pinned topic by the owner of the forum so we should probably take this discussion elsewhere.

I’ve been approached with a proposal to accept a booking, which would be paid for by the individual’s employer; the individual would never move in and instead we would split the proceeds.
I suspect he’s capitalising on the fact that hosts might go for this in an era when bookings are unlikely.
Super-dodgy individual, highly unethical, and really risky.

If this is via Airbnb please report them. Thanks for sharing this info.

I had a similar request on VRBO. Traveller being sent by his employer, requesting to pay me with a check from his employer. Pay by third party check? I don’t think so. I tried to call VRBO about this and waited on the line for over an hour for someone to talk to and no response. Anyway, straight cancel.

My VRBO/HomeAway scammers are always visiting their wife’s family in Turkey and asking me to send all my info to their accountant.

@AnotherHeatherP It’s a known scam. They pay with a bad credit card, or check, you refund them half (as if you’d fall for it, but someone must, otherwise they wouldn’t waste their time on it) then their payment is rejected.

I got this request today… seem a little suspicious to anyone? Lol!

Hey, ;o I am Alan. I’m going to have a business trip to Funchal. I was looking through Airbnb to find some apartments there and wouldd like to book your apartment However, there is one sensitive issue I’d like to discuss personally I have decided actually not to stay in your apartment upon arrival but tto sstay at myy friend’s house insteadd. l have a plan to stay at my friend’s home once I’m there and not to check into your apartment at aIl. The purpose of booking your apartment is simple. Book your apartment, never move in and just share the rental fee There’s nothing for you to worry about. 1f you like mmy plan as much as 1 do p1ease gett bback tto me as soon as you can. You could text me in VVha ts ap p. This is my numb (Phone number hidden by Airbnb)

I’m nit even sure what they are trying to explain. The purpose gave me nothing about the purpose…

It’s a scam at some level, just decline.

Hows Funchal doing? One of my favourite destinations, especially for indulging in excessive amounts of the local produce

Yeah like most i guess. All tourists were ordered to leave the island last week and absolutely everything shut apart from essentials. Hiring cars banned, mandatory quarantine at a predefined resort guarded by the miliary on arrival. To be fair the measures are keeping the covid cases low. The tourist dependant economy is on it’s knees already as expected but can’t complain though we are all in the same boat now.