A new way to generate publicity, of course without asking hosts before announcing it.

Chesky urged Airbnb hosts to “reach out” to him if they want to host a refugee family and pledged to connect them with the right people at the company.

I’m afraid that I’m more than a little cynical at this offer. Refugee organizations want long term rather than short term housing, and they have plans ready and communities organized to get families housed and settled.

I’m afraid that I’m more than a little cynical at this offer. Refugee organizations want long term rather than short term housing, and they have plans ready and communities organized to get families housed and settled.

Ah, virtue signaling without coordinating with relief agencies or asking any hosts for input. Let’s hope the “right people at the company” actually know what they’re doing.

BUT that being said, I’d rather help out with short-term housing while these poor people get settled into long-term living situations.

I wouldn’t mind hosting a couple here (2 max is my limit) and at least this time he’s not offering people to stay for free as he did during a hurricane a few years ago.

This screenshot shows where the money is supposed to be coming from to fund these stays.

I wondered why shares were up $12 when I checked this morning. Knew there was something going on. 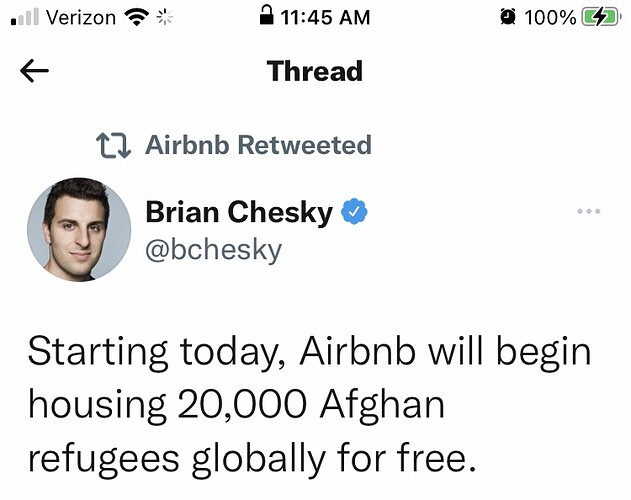 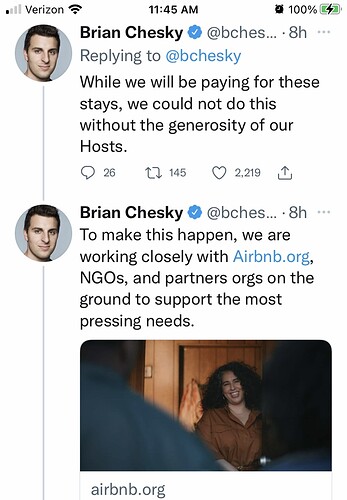 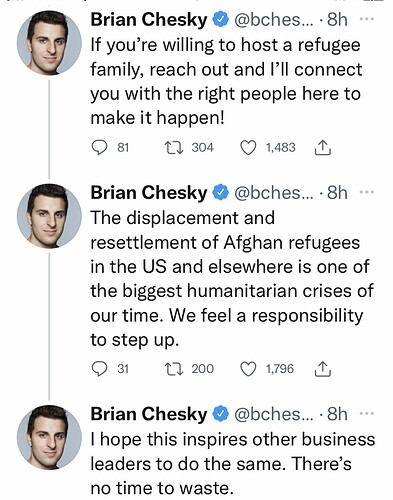 Bet he will want a discount!
Is this a third party booking?

I suggest taking some of your Airbnb rental proceeds and donating directly to Lutheran Social Services, International Rescue Committee, etc. as a much more effective way to fund refugee housing and other support.

Or contact your local Lutheran Social Services or Catholic Charities offices directly to offer your apartment or house rental. They will pay the rental rate and/or transition the refugee to paying part or all through job placement, and are generally looking for longer term housing.

As reported by one Airbnb host in the Washington Post comments on this AP article, IRC booked with them through Airbnb and paid for the lodging. Unclear to me if any NGOs are utilizing the original Airbnb program where the host “donates” the lodging and receives nothing.

Airbnb.org is asking for cash donations from its hosts, and anyone else, and is in turn donating something to the NGOs. Airbnb is not charging its usual fee to the NGO making bookings and I believe also is using the donations to provide operations support for those bookings. But the cash flows and actual level of support seem murky to me.

BTW, a cash contribution to a qualifying organization, IRC, Airbnb.org, etc., is a charitable donation in the U.S., tax deductible if you itemize rather than taking the standard deduction.

However, donating free use of your Airbnb space would not normally be a charitable deduction, unless there is some exemption I’m not aware of, as it is not a transfer of ownership. I’d also be concerned that “donated” lodging might count as personal use days under U.S. tax rules, which could reduce or eliminate rental/business expense deductions for Airbnb hosts if over 14 days. Consult with a tax advisor if you are planning on doing this.

“thousands of people have been displaced, seeking refuge at police stations, churches, and temporary accommodation set up by NGOs”

Or contact your local Lutheran Social Services or Catholic Charities offices directly to offer your apartment or house rental.

As an athiest I would never work with orgs like this - supporting their ‘missions’ is, to me, as bad as what the Taliban professes to do. Any ideas on orgs that will do humanitarian work without the simultaneous support of religion - which FYI is the reason that the Taliban exists… to force their ‘beliefs’ on people with the excuse of ‘morality’…

My Jewish Secular Humanist congregation (altho I was raised Catholic, long story) has been supporting a Muslim refugee family assigned to us by Lutheran Social Services.

I don’t think these organizations do much if any proselytizing in their refugee housing activities, but I could be wrong. They’ve got a lot of experience with resettling people.

However, donating free use of your Airbnb space would not normally be a charitable deduction, unless there is some exemption I’m not aware of, as it is not a transfer of ownership.

It’s considered an in-kind donation of a service. It can’t be for more than the normal rate. I have donated stays to our local opera and symphony to house visiting artists during my off season. I even loaned my Yamaha keyboard to one of them. Unfortunately, I don’t make enough to make the deductions worthwhile.

And if you donate a couple of nights to a political candidate, most state campaign laws require reporting the in-kind donation, as does Federal law for Federal candidates.

There are many non religious organisations including local government in many areas that are co-ordinating relief efforts. I’m sure if you do a Google search for your local area they will come up. @Rolf

Why can’t you do both @dpfromva ?

Quite sad and shocked at the reaction and lack of awareness of some hosts posting on this thread.

There’s an opportunity here to help refugees who have been living through some of the most unspeakable trauma for many years -in some cases for the whole of their lives.

Just because hosts are cynical about Airbnb doesn’t mean this scheme isn’t a good one if Airbnb is working with charities to vet both hosts and refugees.

Airbnb says they will cover the costs if you offer accommodation and yet some of you are still querying whether you will be able to do this as a tax write off.

I’ve already offered up my home to help through my local government (without expecting payment or worrying about whether I can write it off on my taxes).

Of course in the UK, US and Australia as always we are accepting pitifully small numbers of Afghan refugees compared to much poorer countries who are opening their doors.,

Rather than being cynical about Airbnb’s efforts perhaps that is a better focus for your attention.

Airbnb says they will cover the costs

This, I suspect, will be a sticking point for many, as very few experienced hosts trust Airbnb any more.

Just because hosts are cynical about Airbnb doesn’t mean this scheme isn’t a good one if Airbnb is working with charities to vet both hosts and refugees.

Airbnb currently struggle to operate their core business effectively for many hosts, which does not inspire confidence in them being able to coordinate with numerous outside NGO’s, charities and government agencies.

It’s all well and fine making a grand public gesture, and as one poster mentioned, it didn’t do the share price any harm, but for the young master Chesky to assume hosts will be queuing up to offer their listings is a bit presumptuous.

STR properties are not ideal for someone in this situation, especially if the stay is not directly supported by the relevant central/local government agency responsible for finding medium/long term accommodation for refugees. Adding a further layer of complexity by throwing Airbnb into the mix, in my opinion, has the potential for disaster.

some of you are still querying whether you will be able to do this as a tax write off.

Why shouldn’t they? For many STR is a full time business, it’s what puts food on their table, pays the bills and clothes their children.

Personally, it’s a no from me. I’ll continue to support organisations such as MSF and STC, even though I’m unable to write anything off against tax here. It’s a far better use of my (personal) resources than assisting the young master Chesky in his publicity drive.

Am I being cynical? Your fecking right I am.

Call me skeptical about this. Seems like without much thought, Air is shooting from the hip to gain publicity. In normal hosting they can’t even give hosts support, no call backs, drag resolutions out forever.

Imagine the support from Air when there is a language barrier with displaced people having no support in a totally foreign place.

Good luck to any that take them up on this but I can’t and doubt anyone would be coming to this area I live in.

@JohnF the reason hosts posting here shouldn’t be looking for tax write off is because Airbnb would be paying them for the refugees to stay - so why would you get a tax write off too???

You certainly don’t need to use Airbnb to help.

I know Spain like the UK is taking sadly small numbers but I’m sure there are local groups if you want to get involved.

Used to work from MSF / an amazing organisation.

We have 30 families arriving in my city this week and I’ve already signed up to help through local organisations.

Airbnb would be paying them for the refugees to stay

At market rates? I’d be surprised if that was the case, therefore there may be an element of a charitable donation, i.e. the difference between the market (normal) rate and what is received from Airbnb.

I haven’t seen the details of the scheme yet so can’t comment on whether or not the scheme would cover full fees . @JohnF