I discovered that airbnb is doing a test pilot of a new feature.
Allowing a guest to pay with multiple forms of payment (or multiple people paying for one booking)
My payment that failed with 72 hours to resolve (another post), the booking guest said “I see the $200 on my card, so it must be my friends card that failed”.

A snippit from the article…
Here’s how it would work: Let’s say you’re booking an Airbnb for a group of friends. Instead of charging the full amount on your credit card and then tracking down each individual for their payment, you’d be able to split the cost 16 ways.

This would take care of a lot of issues.

The same thing happened to me with the booking I had where the guest failed to pay within 72 hours. He told me he was splitting the cost and his friend’s payment didn’t work so he ended up paying the lot himself to secure the booking.

It’s about time, Uber has had split payment feature for years. It’s a real pain getting money off people when you book accommodation for a group.

My recent bookings as a guest, they have allowed me to pay half now and defer half which I appreciated as some are more than 6 months away.

In the past two days I have had two guests book with this multiple person payment 72 hour thing.
I don’t care how many people pay for the reservation - but blocking my calendar with uncertainty for 72 hours is just not acceptable!

Do you get to approve this?

Nope - 72 hours wait and me pushing the potential guest saying -: your booking is not confirmed until it is paid and I have had enquiries for the dates you want. Their answer - waiting for the rest to pay their share

I presume you’ll be reflecting their delayed payment (and zero care factor) in your review of the group? If so, might be good to incentivize them now by advising something like ‘[insert the usual, please let me know special food requests/checkin time etc x days prior to your arrival] . I would also appreciate your paying for the booking within 24 hours so it can be confirmed as the dates are now blocked on my calendar. I’m dedicated to providing my guests with a 5 star experience and try to communicate with you clearly at booking stage so I can let you know what’s required so I can give you a 5 star review too.’

I just experienced the new "split payment option"myself, and I definitely think it is a huge mistake for Airbnb to offer this option. It actually can hold/block your property for up to four days total. One of the greatest things about Airbnb is that you don’t have to worry about finding ready, willing, and able guests. Airbnb does that for you. Now they are blocking dates out without the host’s approval, for people that are not ready, willing, and able. In my particular experience, the reason for the extreme delay was that one of the payors accounts had insufficient funds. I would strongly advise any hosts that don’t want these four-day blocks on their properties to submit feedback on the Airbnb website. I just submitted a lengthy letter to them. I actually started off by telling them that I was 100% satisfied with their service and support up until this new option was instituted. This new option seems very unprofessional.

Agree. This is one of those features they should let the hosts approve, but no, it’s just unloaded on us. I only cater to two so I won’t have this happen.

I think feedback goes in a black hole. No one cares. They just want to make as much money as possible and squeeze hosts a dozen d ifferent ways. Other platforms do this so that’s why they felt they have to do this too. But at least on Trip Advisor you get the choice of allowing it or not.

My first experience of this and I’m spitting blood. Two couples booked in my 2 bedroom guest suite for Easter, wtf. So the beginning of our season and my calendar is blocked, whilst in the meantime I’m getting irritating messages about what the local attractions are, this, that and the other and they haven’t even bloody paid. I am simply to angry to think about what to do . Yet.

I need some of the red stuff…

I think feedback goes in a black hole. No one cares. They just want to make as much money as possible and squeeze hosts a dozen d ifferent ways. Other platforms do this so that’s why they felt they have to do this too. But at least on Trip Advisor you get the choice of allowing it or not.

Agreed. Black hole. HomeAway does not allow it, though.

My response when a guest does the split payment:

“I see that you are splitting payment. You reservation is not confirmed with Airbnb until all persons have paid.”

And, until they pay… I leave them waiting for any answers to their questions. Once they have paid, either
"Payment has processed."
or
"All looks good now."
And then I will answer their questions.

It is not like a night out at a restaurant where they want to quickly split the bill and get out and not have to sort out cash, which people may not be carrying, at the time. They are organising a holiday together, weeks in advance, the person organising pays the host and then arranges repayment from their fellow travellers. Could it be any easier?

I had one on Stayz which hadn’t been paid for 7 days and was still listed as “pending payment” and blocking my calendar. Because I generally have care factor zero with Stayz I hadn’t noticed but then immediately cancelled the booking. Surely a booking deadline passing should mean the booking is automatically cancelled?

To be added to my little book of succinct responses. Thank you.

So, tonight I booked an AirBNB in Figurers Spain. Most of my cost was covered by my SuperHost credit, with just a bit left over. This is a screen that I saw: 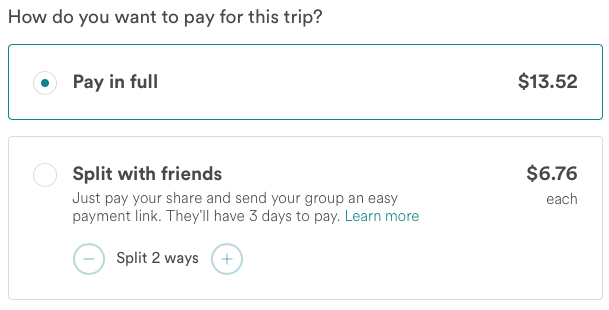 Really? They are offering to SPLIT $13.52? I have to admit I assumed you could only split if the amount was over, I don’t know, maybe $250, $500? But really? Someone’s calendar could be blocked for two payments of $6.76? Can you buy a Starbucks coffee for that? I am rather disgusted.

I experienced this a couple of weeks ago and ended up with my calendar blocked for the Easter weekend, whilst the group of four got round to paying in full. I called Air to learn that the second card payment had failed; they were still waiting for it. After I pointed out that this was blocking my first important w/e of the year, they cancelled the booking and re-opened my calendar. The person who had already paid half contacted me and we agreed she should re-book, whilst paying the full amount.

It shouldn’t be up to hosts to be responsible for chasing split payments and I’m fairly sure the CSO agreed!