Hi Guys, new to the forum. I’ve been hosting since April and have achieved Super Host status. I’ve tried to be the best host I can be and have been able to get mostly 5 stars…all non 5 star reviews have been 4 star.

My current situation is, I have a family of 4 staying with me, on a week long trip. They arrived last Wednesday and leave tomorrow. They paid $1375 for the week.

On Thursday night I got a message asking me to look at the thermostat as the house was quite warm. With some fiddling I got it to go on and got the temperature down. Saturday night another message asking me to take a look. I wasn’t going to be home until late but I have access to the thermostat from my phone so I checked it and while it was set to 75, the inside temperature was 82.

I responded that I would change the filter the next day but if the problem persisted they should let me know so that I could call someone out to look at the AC.

Sunday night nothing from the guest…but Monday same complaint…thermostat was at 75 but the temp was 82. I had someone come out today (tuesday) and fix the AC unit, it ended up being a freon leak which cost about $1100 to fix.

I messaged the guest letting them know about the fix, and their response was that they were glad to know it had been fixed but the fix was somewhat futile as they were leaving tomorrow and they had been unable to get a good nights sleep for their entire vacation.

I’m wondering if I should offer them some sort of partial refund. On the one hand, I feel that I was active the entire time with regards to trying to get things working, and had someone come out as soon as I was sure the thing was broken. That said, while a broken AC unit isn’t something I can magically fix immediately, and isn’t something one can prepare for, I still feel like I didn’t give my guests the best experience.

I’m wondering what other hosts would do. Do you give them a partial refund? I’m thinking like $375 as a refund since they paid $1375. I don’t expect that even a partial refund will get me a 5 star review, but I feel like it would still be a show of good faith. What do you guys think?

I would not offer a refund, you did your best s*** happens. They might ask for something so I would wait.

I would offer a substantial partial refund. 82 degrees is very hot. I know that it was beyond your control, but I’m sure the guests were very uncomfortable. When I’ve stayed in hotels and something didn’t work; I’ve been offered a refund. Once in Costa Rica when there were scorpions in the beds and people’s shoes (I wasn’t scared, but my husband insisted on leaving.), and once in a Motel 6 when the electricity went out for a large part of the day.

I think a show of good faith is in order…they did pay for air conditioning. What about offering to buy them breakfast tomorrow morning? It’s a nice gesture and it’ll be a lot less than $375 (ouch!).

REAALLY ! 82 degrees is NOT THAT HOT! Humidity might be a factor though

It depends on what you are used to. 82 degrees is very hot for me, especially at night.

This is Los Angeles so not super humid. Also there are fans in the guest rooms.

While it stinks, I think a partial refund would be good. It stinks to be out extra money in repairs and offer a refund, but it’s a cost of doing business. Maybe offer them $175 back, and then $175 towards a future stay?

I can’t sleep in air that is 82º. I lived in eastern North Carolina, in the Great Dismal Swamp, for two years without air-conditioning, and was miserable any night that the outside air stayed above 75º. Of course, there was high humidity as well, so maybe it is different elsewhere?

Temperature is very subjective, I’m here in nyc and the temp is 82 on my thermostat and the humidity is very low and I’m fine and so is my husband. We do have ceiling fans though 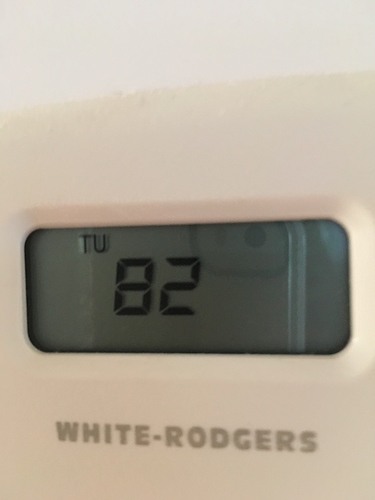 Interestingly the AC worked during the day. What was happening was, there was a freon leak which was causing the piping to freeze up. During the day, the heat outside kept the pipes from freezing so the AC worked, but at night the pipes just froze completely and stopped cold air from being pushed into the house. That’s also why it took so long for me to diagnose the problem. During the day it was working fine.

I would have had trouble sleeping in 82*, and would have been uncomfortable. As a host, I’d be super annoyed to refund, but I would make a significant refund. They did contact you the 2nd day of their stay, and 3 times during their stay. I would be annoyed if I had to contact someone 3x during a weeklong stay for the same issue. So, yeah…I’d probably give a rather significant refund.

Appreciate all your input guys. I’m going to refund them $300 and offer them 50% off a future stay.

I find that a little chilly

Seriously though one of my hosting fears is that the AC could break down. I think that my solution would be to go to Home Depot and buy freestanding AC units. They are probably expensive but would be there in case the breakdown occurred again.

I don’t think I would offer the guest a partial refund though. These things happen.

That’s pretty generous but I think you did the right thing. It’s not our “fault” when something like this goes wrong but it is our responsibility.

I have a kind of central air called evaporative air. It’s simple to operate and I can do most fixes myself. Both bedrooms have window units and ceiling fans. And I have a portable refrigerated unit I could move into a guest room. But if all failed I would offer a refund approximately equal to the time they were affected. Once when the internet went out I gave a partial refund. I would suspect I’m in the minority though.

Or rent a cooling unit from a rental supply.

What other people think is comfortable/too warm/too cold is totally irrelevant since the guests already indicated that they were uncomfortable. If it were 82 every night, I would refund half the amount. Personally, I think you should have called a repair person much sooner – like the day after you saw the 75/82 discrepancy. We can afford to take the time to trouble-shoot when it’s our own families who are hot and complaining but when stuff doesn’t work for paying guests, we need to be extremely proactive. The cost of repairing your own AC system is also irrelevant to this discussion since those are the costs of maintaining your own home and should have no bearing on how much guests are entitled to as compensation.

Your guests raised the issue the day after check-in and you were not able to resolve it until almost a week later.