The first short paragraph of my hardcopy welcome letter, which guests are directed to pick up from our mailbox at the road, tells them where to park. Tells them and shows them. There is a photo in the letter of the exact spot, because one guest in a hundred at one point misunderstood and parked in my vegetable garden. I thought someone else might misunderstand in the same way, so added the photo. Hundreds more guests later, my vegetables have been safe.
Yesterday I planted a sycamore tree that is a gift from a friend. It’s not quite a metre high, still a sapling. Lots of mulch around it, very obvious. It is in a grassy area far away and down a hill from the clearly marked and pictured parking spot, so no need to put a little fence around it or anything…
What’s that you say? You know what’s happened?
I’ll tell you anyway, to confirm.
Today’s guest drove over the tree getting to a non-parking spot (too grassy and boggy) that they decided was better than the high and dry one at which they were told and shown to park. They are the first in, now, around 300 guests to have ever tried to park down there.
The tree is wounded but maybe not fatally. It is propped and has been provided a little iron fence wrapped in accusatory caution tape.
Can’t be missed when they spin their tires in the bog when leaving tomorrow.
What’s that you say? It can?
I know.

As a former teacher, I feel your pain. No matter how some things are explained there are those whose brains just work differently. It’s a wonder they could even get as far as they did.

Did you message them about this?

I look forward to the rest of the story.

I will update. My prediction is that the update will be boring: Their answer of “Oh, we didn’t read that part”, me doing more cleaning than usual since they will not have read anything else either, followed by me wording a review that isn’t just, “They ran over my tree,” even though that will be my first draft.
But maybe I’ll be surprised.

The tree is wounded but maybe not fatally

I hate it happened. Sounds like an “alcohol was involved” incident. I’m a bit more worried about them getting stuck & what that will do to your yard & if a tow truck is required, what a mess that will make. 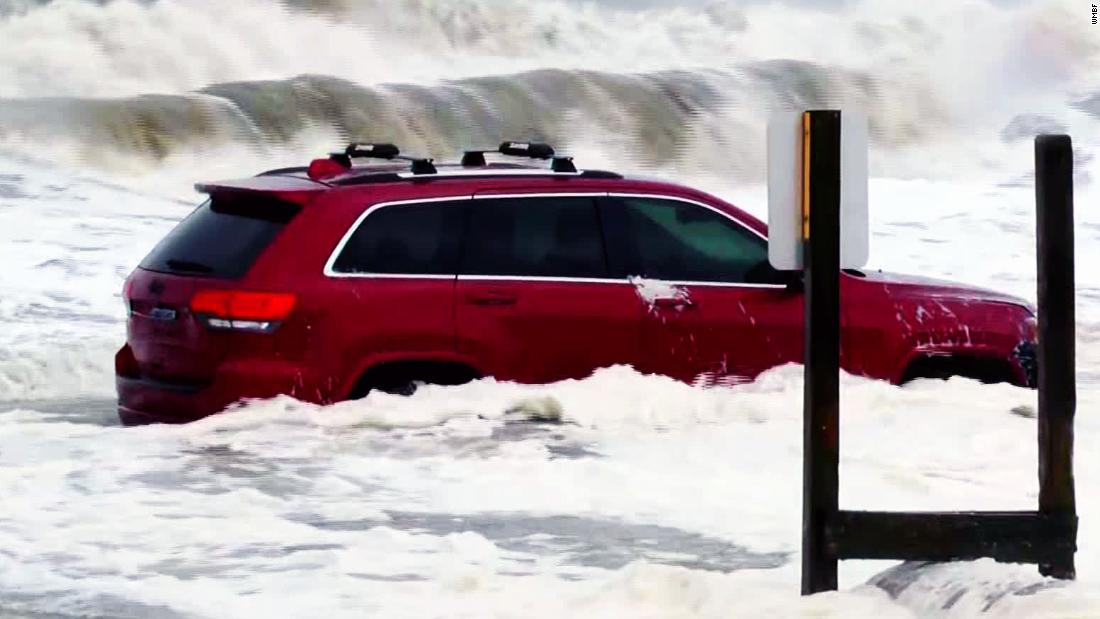 Waves crash against red Jeep SUV stuck on the beach during Hurricane Dorian -...

A red Jeep SUV became a social media sensation as it was bashed by strong surf whipped up as the storm moved past South Carolina and up the Atlantic coast.

“They ran over my tree” sounds like a good title for a country song : )

Ug, that’s awful. We had some folks this summer drive through the driveway, around the back of the house and park in the front lawn (less of a walk to unload their car). So rude and unnecessary.

Probably city folks, I used to be one. Now that I live in the suburbs, I see all the work that goes into keeping a nice green lawn.

In the city, all we see is a sea of concrete with some parks dotted here and there, so the concept of lawn is foreign to us.

Perhaps putting up a few signs “keep off the lawn” might help if you get more city folks.

My hubby would have had a heart attack had someone driven on his lawn. It’s his pride and joy : )

Why not put it in the review?

I would not host guests again, they ran over my newly planted tree despite the fact that clear parking instructions including picture of where to park was provided to them.

"They ran over my tree” sounds like a good title for a country song : )

Or “I ran over her tree and now she’s left me and taken the dog”.

There is a totally hilarious 50 minute documentary called Lawn and Order, which was produced by the National Film Board of Canada. Well worth watching. Here’s one source, I’'m sure there are others.

The tree is wounded but maybe not fatally. It is propped and has been provided a little iron fence wrapped in accusatory caution tape.
Can’t be missed when they spin their tires in the bog when leaving tomorrow.
What’s that you say? It can?
I know.

I love the “accusatory caution tape” line. Thanks for the giggle.

That’s all I thought when she mentioned boggy land…

Nothing surprises me anymore. I have a two house property and my driveway clearly goes all the way back to the second house with a large parking area off to the side. The drive also goes under a porte cocherre so there is no option to drive around someone in the driveway even on the grass. Despite pictures and directions several guests a year park blocking the driveway. It drives my long term tenants nuts. I have learned to always look past the guests at the door to see where they are parked so that they can remedy the situation immediately if needed.

Update: So @Ritz3 called it. It was city folks – city folks who rented a 4WD for their woodsy adventure. I’m blaming those ads that show shiny vehicles, canoe on top, bumping over logs – and sycamore saplings? – to get to picturesque camping spots. It seemed to be all about the vehicle.
How do I know? We, the guest and I, had a face-to-face chat on the lawn. I said we needed to talk about where he had parked. He told me not to worry (about them getting out) because they rented the 4WD just so they could “go anywhere”. When I pointed out that the bottom of my garden wasn’t in the instructions so wasn’t anywhere to go, showed him that some damage was done, he was very apologetic. Actually seemed to get it. Moved the vehicle and spent the rest of the stay tiptoeing. I got messages apologizing for some mud on the listing rug, for a hard-to-scrub pan, that sort of no-big-deal thing.
Because the tires didn’t spin (4WD after all…), there were just the tracks and no ruts. Easy to tamp down in the wet. The tree is alive so far.
No worries, @RiverRock ! It wasn’t that I was not going to mention the tree. It’s just that, even though I wanted it to be just the one line, the review needs to be more than a hurtin’ song title. (Love that, Ritz and @muddy !)
I’m still drafting the review. I promise to be brief and honest, fellow hosts, as always.
I’m keeping in mind that in the end I would host these people again. They made a mistake and apologised and didn’t compound it with any other rule-breaks.
It had a much better outcome than I predicted. Happy to be wrong!

You’re lucky it was just the tree… These are the kind of people who’ll use a fireplace or woodstove without reading the instructions, having never built a fire in their lives, and burn your house down.

having never built a fire in their lives, and burn your house down.

Cooking and smoking are the cause of more house fires than building fires in woodburners and fireplaces. And lots of fires are causes by using too many extension cords or using space heaters improperly.

than building fires in woodburners and fireplaces

That’s been my experience.
Fires in the wider neighbourhood are grease fires or electrical.
Our listing has an outside firepit and an inside woodstove. I almost love it when guests are inept, since it merely results in them not being able to get, or keep, a fire going. Knock on wood (the wood they don’t use…) they haven’t yet burned the place down.

Knock on wood (the wood they don’t use…) they haven’t yet burned the place down.

A few years ago a host here posted about about a guest who didn’t properly extinguish a fire pit fire and it did start burning out of control. I think one Adriondack chair burned and it might have been worse but the host was alerted to the fire by her exterior cameras. The guest was unresponsive and the host had to call the fire department.

I don’t want to dismiss the possibility of a guest starting a fire in a fire pit. One of the smartest, most practical folks I know lost 17 foster pets in a home fire started in a sofa by a damaged extension cord.

Just trying to point out that sometimes people aren’t afraid of the things they should be afraid of.

I knew a woman who managed to burn down two cabins she lived in with candles she left burning. Too bad it happened twice before she swore never to light another candle.

I had to ban candles here. Given the number of times guests have knocked over their wine bottles/glasses, I know they would never keep a candle upright!

I knew a woman who managed to burn down two cabins

Me too! Good grief. How many of them are there out there?