Why is telling the truth SO HARD!? Correction: Totally deserved to be put on blast!

My last guest is a really nice guy but his group did not do a good job. I walked in finding my place smelling like some sort of flavored tobacco I guess.

The front door was unlocked and the windows were open. They had checked out 4 hours early (that’s fine) but didn’t bother to tell me so house was left unsecured all that time.

95% of checkout was undone.

My good throw reeked of smoke (assume someone wrapped themselves in it outside and smoked).

They used 2 Rubbermaid containers to store their product and as an ashtray I guess (melted sides).

They overloaded a circuit by moving an extension cord we have to the bathroom and plugged in who-knows-what because the cord looks to have burned. I could go on.

The booking guest paid quickly for missing/damages items (nothing major). And I made good $$$.

BUT I would have been in big trouble if I didn’t know how to deal with the odor issues; they burned candles and used up a bunch of my odor sprays trying to cover it up; and they didn’t proactively tell me about the cord…I hard to discover it missing.

The hard part…the guest had a solid 5 star rating and lots of nice things said. I was cool with him about the damages and did mention the bowls ruined by the “herb” or “leaf” smelling product. I didn’t rag about the house smelling because Air wouldn’t have backed me & it would have gotten messy me what was the point.

I’m sure he thinks we’re cool…well until he sees his review. I was fair (maybe too gracious) and truthful but why so I know feel bad!?! I just kept thinking I’d really want to know what he did so I wrote the unemotional truth & gave 4/4/3 stars which averages to a 3.6. Too harsh? I wish he’s done better because I liked the guest in general.

They overloaded a circuit by moving an extension cord we have to the bathroom and plugged in who-knows-what because the cord looks to have burned.

Maybe a silly question but is there a plug near the mirror in your bathroom, close enough to see in the mirror when you dry your hair? A blowdryer will melt a low gauge household extension cord.

What was the star knocked of for communication for?

Maintain the rage on how they treated your listing!
Don’t feel bad, you don’t want them back and why should anyone else put up with this complete disrespect.

You said that you think they took your throw outside. I wonder if they took a portable electric heater outside, too and used the extension cord to power it. I had a couple of extension cords in a drawer in my listing and there was one in use behind the headboard in the master bedroom for one of the nightstand lamps because the cord wouldn’t reach. All of them used 14-gauge wiring to prevent people from plugging in things that might overload the cord before tripping the breaker.

All of them used 14-gauge wiring to prevent people from plugging in things that might overload the cord before tripping the breaker.

Good point. They took an extension cord from behind a bed that was there so people can plug in their cell phones right by the nightstand. There are other plugs in the room but they have to put the phone on the floor away from themselves. This is an old house so it doesn’t have a plug on either side of the bed. I’ve never had anybody remove one before. 21 year olds

They took it to the bathroom (only inlet on the blown circuit).

i guess I should just remove them. It might be odd having heavy duty ones dangling out there.

Someone also cooked a frozen pizza in the oven but didn’t take the cardboard bottom off the pizza first so that burned as well. Ugh.

They took an extension cord from behind a bed

They always find that one, I don’t know why. We started leaving a heavy duty extension strip next to the white noise machine and desk fan. Mostly because I don’t want to have to climb under the bed and re-attach the other one.

They took it to the bathroom (only inlet on the blown circuit).

Any idea why? Does the blowdryer reach to the mirror?

It might be odd having heavy duty ones dangling out there.

You can get white ones.

didn’t take the cardboard bottom off the pizza first

Man. I was never that young. Geez.

Any idea why? Does the blowdryer reach to the mirror?

No idea at all. And yeah, plug is right there ( 2 free inlets). Both bathrooms. There were only (supposed to be) 4 people so I can’t imagine what they’d need more outlets for. Go figure.

Maybe it has to do with whatever they were smokin’

Maybe it has to do with whatever they were smokin’

Maybe I’m wrong but guessing the extension cord was a cheap white one without ground. They are thin and can build up resistance under heavy load especially if something like a room heater, hair dryer or coffee pot is attached (they use LOTS of watts). If your bathroom circuit has 12 gauge make sure the actual outlet is a 20 AMP GFI, not 15 amp (about $18).
.
If you must provide an extension and we do not, make it one with surge protection and ground at MIN 12 gauge wire. A 25 foot 10 gauge is even better, and they can be cheap, as it will handle far more load than the original circuit. Lower gauge = thicker wire.
.
Unless you HAVE TO, don’t provide an extension at all. They are asking for trouble, and a source of arc fault electrical fires.

What was the star knocked of for communication for?

The guest didn’t ever reply to any message even if I specifically asked at the top. I had to text outside the platform to get a confirmation they’d checked in (I can see on camera but want them to confirm on the platform). I asked about departure time & sent checkout - no reply. Leading up to the stay I sent checkin info and ask to confirm receipt so I knew they’d be able to enter - no reply. He asked for an extension via the platform and I approved w/ a note - no reply. And I don’t even need a dialogue - just an “ack” (my husband and I are computer/engineering nerds

And I should add that he left yesterday around 530 and left one of his young buddies in my house for another night w/o telling me or leaving any contact info for him & who did who-knows-what in my house (but definitely not the checkout procedures, he definitely did NOT do that!

Unless you HAVE TO, don’t provide an extension at all. They are asking for trouble,

I threw that extension cord thing in there as a detail…and who knew!!! Clearly I have some retro to do. I do need cords (to be promptly replaced with surge strips) for lamps but can get rid of the ones for the cellphones.

Thank you @Jefferson and @JJD for latching onto that for me!

@Jefferson Check this out. This cord was intentionally cut (clean cut on the receptacle end) and the plug side split and attached to something (ends are burned). Ideas???
PS> NOW I feel no guilt - totally earned that 3.6 & lower if I’d realized this was intentional! 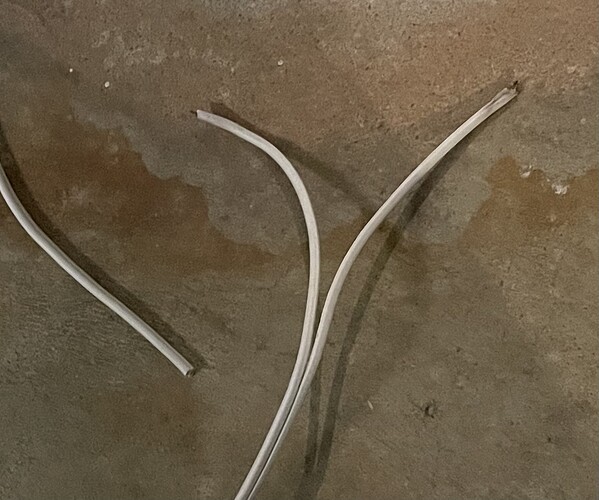 And anyone recognize what this stuff is? Stinks and seems to be in the shape of little logs. I assume what they were burning or smoking? I don’t think I mentioned they brought in candles they’d burned and used all almost all my air freshener trying to cover up the smell. 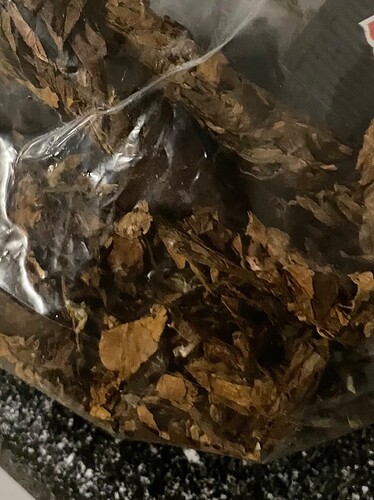 They took an extension cord from behind a bed that was there so people can plug in their cell phones right by the nightstand.

I purchased lamps with USB ports to put them on the nightstands besides the beds. My guests love them.

Any guest who breaks one of our important house rules (smoking, pets, etc) will earn all 1 Stars, a review starting with “Would Never Host Again”, and a No for “would you host again”. And we’ll just calmly wait until day 14 or after they wrote theirs and have no notion of what is coming their way.

This cord was intentionally cut (clean cut on the receptacle end) and the plug side split and attached to something (ends are burned). Ideas???

.
Probably to use the wires with something that had a grounded plug. Very stupid and dangerous.
.
Good time to figure out how to avoid having any extension cords, unless they are totally hidden behind furniture. Electrical fires are no joke.
.
If you have a basement, then consider adding outlets where they are needed to avoid any and all extension cords. It isn’t difficult to do and does not cost much.

Probably to use the wires with something that had a grounded plug.

But they ditched the receptacle side and used the ungrounded plug side (with the burns). So curious.

Look, we know they were reckless idiots and won’t know what they actually did. It is best not to dwell on it, but to make sure it can never happen again. Plan for the worst, as eventually there will be another idiot guest.
.
Burn marks on wires only occur with severe overload and/or electrical arcing. An entire house can go up in no time.

This cord was intentionally cut (clean cut on the receptacle end) and the plug side split and attached to something (ends are burned). Ideas??? 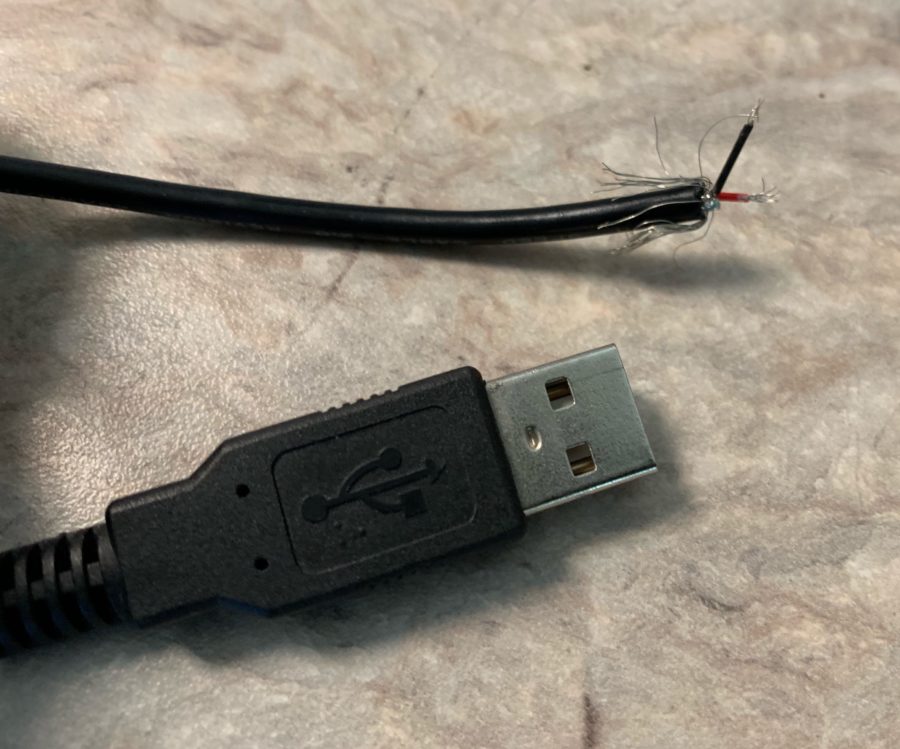 r/fakecartridges - been using this wire and cart for the last two weeks - is it... From brief research, it appears that the advice to use a cord generally refers to a charging cord and not a household electrical cord, but there were others on the internet literally using a cut-off extension cord. It’s too much power. You should probably be glad that no one got hurt or started a fire. These were really dumb guests, lol.

You should probably be glad that no one got hurt or started a fire.

I wish I had known this for sure! One star all the way and reported to Air!!! Look what else I found. You nailed it. 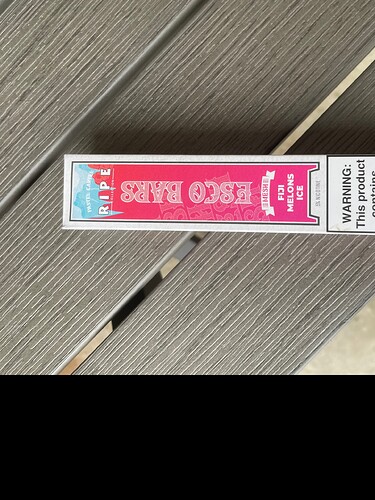