When you think the guest did it but they didn't

I recently posted that I thought a guest took a single shower hook. I realized today that one shower curtain uses 6 hooks and the other uses 7. Duh. So glad I shrugged and bought more hooks instead of asking them if they took it. They would have thought I was loony. Apparently I am loony but I’m going to continue tricking guests into thinking I’m not as long as I can.

I think it was my 2nd guest I thought they took my (custom with local photo stuck on it) pump bottle of hand wash. Then I found it under the bed a few feet away and realized how easy it is to knock it over. Haha!! 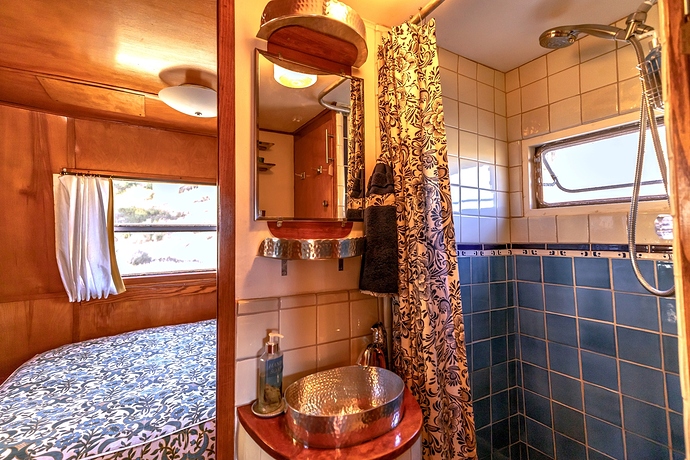 And then you were mad when they knocked off a star for not providing hand soap?

It happens to me all the time. Guests don’t want to dirty the (pure white) bedcover so they put it in the closet or a drawer, if they don’t like the ticking of the (repro MCM) alarm clocks they shove them somewhere weird and American guests (not stereotyping, an observation) rarely use the washing up bowl so put it under the sink, on top of the fridge or any one of several creative locations.

Once I was certain for months that a really pleasant young woman had inadvertently packed one of my beach towels when she left. So much later I discovered that an apartment owner here, who only comes down once in a while, had picked it up from the communal deck area and taken it into his own place.

American guests (not stereotyping, an observation) rarely use the washing up bowl

I’d be an honorary American. I hate washing up bowls. It’s just too easy to dump everything in them and “leave it to soak”. And then you have this nasty greasy film all over the bowl so it’s one more thing to wash! It’s a source of heated debate with my brother who stays here quite often. Along with politics

It’s a source of heated debate

… with me and many Americans

I don’t dump stuff and leave it to soak so that isn’t a problem but I do know that if I accidentally drop a cup or plate into the hard sink, it’s likely to smash whereas it will survive if it lands in the softer washing up bowl.

Me being frugal again

if I accidentally drop a cup or plate into the hard sink, it’s likely to smash whereas it will survive if it lands in:sweat_smile:

Ah yes, good point! On the other hand… if you have a load of stuff already in the washing up bowl then it’s probably going to smash and destroy several other things. Ah, the eternal dilemmas of housekeeping

Growing up my mom had a “washing up bowl” as you call it. I thought it’s purpose was to dump the gray water on the plants outside.

Oh, you are talking about a dishpan! I never heard it called a washing up bowl. (I was envisioning a bowl to wash your face over!)

No they left a 5* review and I am still friends with them. I really did think they had taken it, but not for very long, as I do usually look and or clean beneath the bed.

@KKC I’m just a teensy bit concerned that you’re going round counting shower curtain hooks … I think you may need to take a break from hosting and go and have a nice lie down!

LOL. Your concerns are not misplaced. If I told you all the things I’m forgetting…well, I would if I could remember them…you’d be alarmed. But no, I don’t count shower hooks. When I changed shower curtains I was short a hook because the gray curtain that I took down uses 6 hooks and the white one I was putting up uses 7.

Here’s where I posted about the missing hook. I later found the spare hooks but not until I’d bought another set. Thieves! But no Gypsies or Tramps

Well, I’ve very often had porcelain sinks and things break easily in them. As @jaquo pointed out:

drop a cup or plate into the hard sink, it’s likely to smash

(And also chip the porcelain of the sink).

I’ve also often had very large undivided sinks and it would be a waste to fill the whole sink.

There are probably plenty more reasons if I think about it.

There are probably plenty more reasons if I think about it.

Impromptu vomit bucket; saves digging the carrots out of the waste with the end of a teaspoon.

Yuck to both. But it’s always been a mystery to me why the first usually contains the second.

I have a double sink. Can pour anything down the sink even if the other side is full of dishes.

I have hot soap water in one side and put the washed dishes in the other side, then rinse in running water.

I don’t need to use the sink for other purposes and one side is empty anyway.

The dishwater doesn’t get wasted. It goes into a grey water pipe that waters an area of the garden.

An entire sink is easy to clean. It doesn’t have a “useful life” and it doesn’t end up needing to be recycled.

I know you love your washing up bowl

But none of your reasons for using one make sense to me.