When do books become clutter?

…and another gem who said he hated reading books, “because they smell really bad”

I knew it was time to leave my first husband when we first moved in together. I was talking out loud about how to arrange the new living room and mentioned my books and he said, “can’t you just keep them in the attic?”.

We were young but I wasn’t stupid.

But he was. We didn’t even have an attic, it was an apartment

I have a good size bookshelf and tell guests if they want to take home a book, they are more than welcome. It’s my free little library. I have been hosting for more than 4 years & have never had this abused by a guest taking many books. In fact, many guests seem to appreciate it. After all, how many books am I going to reread?

A woman I once rented my Canadian house to on a year’s lease (and who I knew as an acquaintance) told me the boyfriend she was going to be living there with in addition to her twin boys was a new thing for them, as they hadn’t tried co-habitating yet. She told me it would be interesting, since he had an Ikea aesthetic, and wanted her to get rid of all her nice antique furniture (which no way she was going to do).

The relationship only lasted a few more months.

I am confused - in this conversation are these books for decoration or for reading? I have a huge reference library everywhere. In my hallways and in the guest suite. I’ve lost one book to a guest in all these years. Immediately after I put up a sign saying ours is not a lending library. Guests also have access to hundreds of my collection of thousands of CD’s - as a former music programmer and host on public radio I have this huge collection. Guests play them on the Yamaha/Bose sound system we provide for them. Our music and books libraries get a lot of respect. Imho, most of our guests are entirely digital. They read on Kindle at home without space for a physical library. Music is streamed too. Oh and we are hosting a wing of our house where we live full time.

in this conversation are these books for decoration or for reading?

The discussion started about whether or not filling 12 shelves full of books in OPs ABB would look like clutter or not and advice about how to store books, peppered with everyone’s love or not for books. Of course, the books would be for reading but you still have to consider how they will look if it’s an Airbnb listing, so to answer your question, both I guess.

I’ve lost one book to a guest in all these years. Immediately after I put up a sign saying ours is not a lending library.

The same for us. We lost one book early on and then I put a blurb about the books in the House Manual, saying, “it’s not a take one, leave one situation” and then fortifying it by suggesting that they are from my mom’s collection of books. (Of course, I did not put my mom’s books in the Airbnbs). But it has worked, extra books have been left but no books have been taken since. I do soften it by saying that “if you get attached to one, let’s talk about it”. I don’t mind handing some out at my discretion.

these books for decoration or for reading?

Of course, the books would be for reading but you still have to consider how they will look if it’s an Airbnb listing, so to answer your question, both I guess.

They are definitely for reading, but we’d like to try to set them up in the way that looks best. There were tons of really interesting hints in the discussion, that also included how to make it easier to clean, for instance.

Most avid readers have great respect for books and wouldn’t just walk off with other people’s books. But I can see that if books are in an entire place listing, that some guests might misunderstand and think it’s a “take one, leave one” situation for guests. I doubt they’d do that with a bookcases full of obviously a host’s collection, but if it’s just a shelf of books, they might assume.

This issue is timely for me. My rental emerged from a divorce from my ex. We both moved out of the family home (happily, I moved into another house on the property), so while personal items were removed, an unusually large amount of “stuff” was left, including MANY books. Over the 5 years since then, I’ve done A LOT of editing, removing probably 2/3 of the books and lots of other doo-dads.

Typically, the stuff in the house is a source of delight for guests, but I had a recent guest who was aghast at the amount of “clutter.” I remarked to this guest that "One guest’s ‘clutter’ is another guest’s charm. And, indeed, just a few guests later, I had a guest who raved about the books, games, and other stuff.

So, I would predict that if you leave a lot of books, most guests will be delighted, but a few will not appreciate them

I leave books in all the house, in several of the rooms. Many best sellers and if they go missing. I am happy to know someone is enjoying them. I buy them at Yard sales, thrift shops etc. People let me know they love the books.

My preference is for a curated mix of books, artwork, sculpture, photos rather than a law library look, but understandably it create more work cleaning all that.

At the beginning of the Pandemic (April - May 2020) my guilty pleasure was seeing many of the News Anchors broadcasting from their homes and giving some insight into their home decor, many of which were bookcases.

I was not alone because shortly thereafter I came across ‘Room Rater’ on twitter which critiqued many of the news pundits and their backgrounds. While the News Anchors shortly thereafter began using graphic media to project an image that they were in their studios, many pundits are still Zooming in and still getting critiqued

@ratemyskyperoom
Can you believe it? With any luck in about six weeks we’ll see 10/10 @TimOBrien’s holiday setup. The finest gnomes on cable. 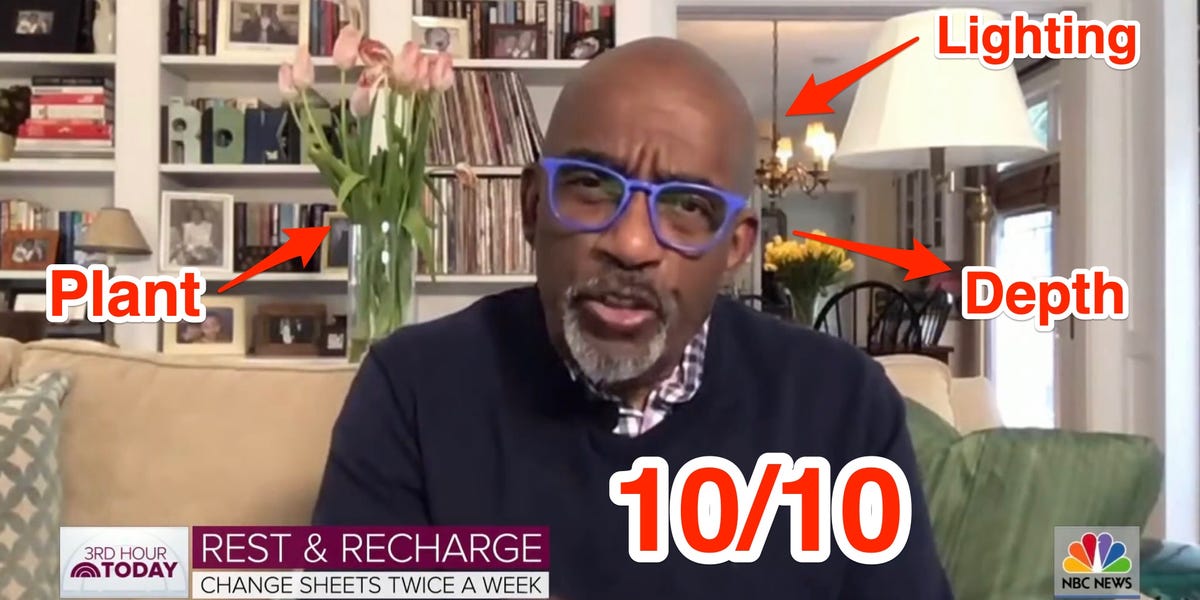 Room Rater is rating the home offices of public figures, from former presidential candidates to award-winning actors, as seen on Zoom and Skype.

Some examples of the good, the bad, and the ugly 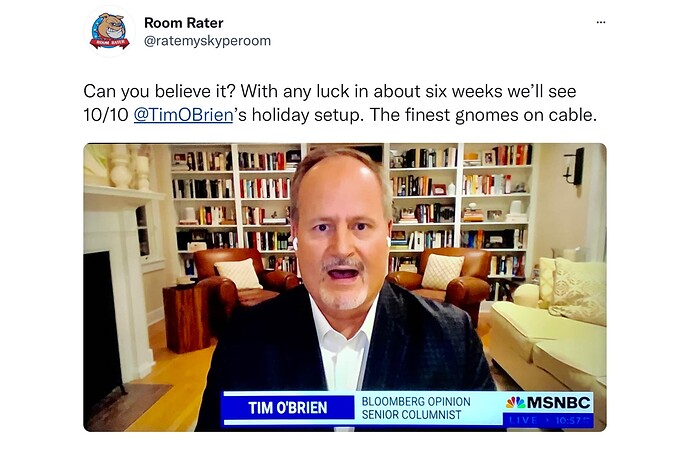 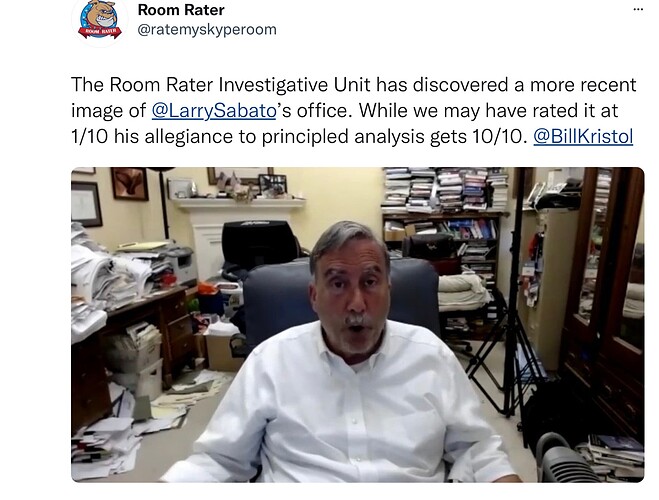 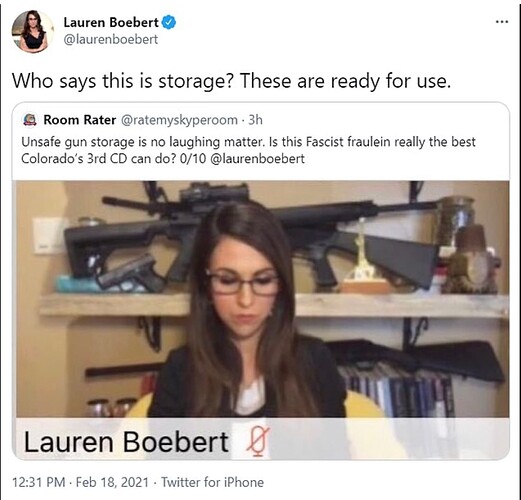 @muddy, you had asked me how these shelves look. Here are two pics, first for the left side of the room… 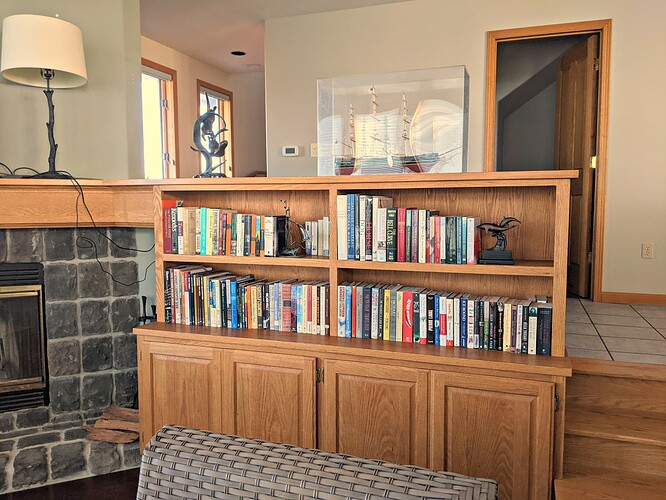 Then for the right side of the room: 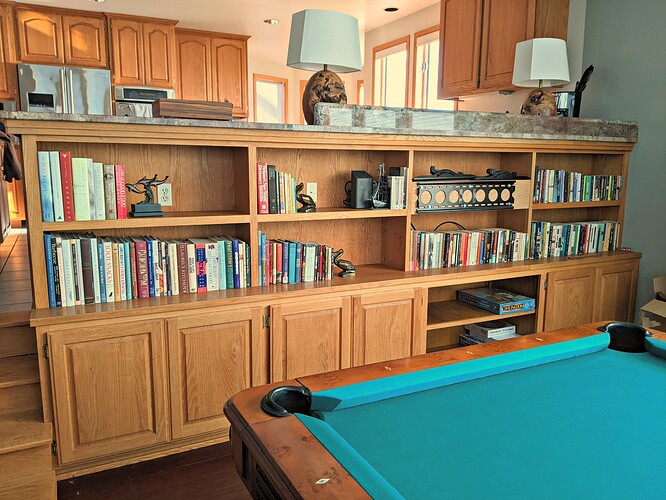 We are doing significant work on the house, so there is a bunch of extra furniture in this room right now.

The shelves in these bookshelves are not adjustable btw.

Oh, well that looks quite nice. Not at all cluttered. I’d appreciate staying at a listing that had a selection of books like that. Thx for posting the photo.

I have a full bookshelf as a “free little library.” If a guest starts a book they find interesting, they are free to take it. Several guests have commented they like it & a returning guest brought books back to donate. I learned early on as a host, that, with the exception of artwork on the walls, I don’t leave anything lying around that I would be upset if it was missing.

I think these books actually look quite nice the way they are. And I absolutely despise clutter. So well done on this!

We have a patented, but not patented, move we do at our listings where we fill bedroom night stands with National Geographics. Like, filled flush. We actually only buy specific nightstands that we know will fit the Nat Goes in this exact way. Here are some examples from different listings: 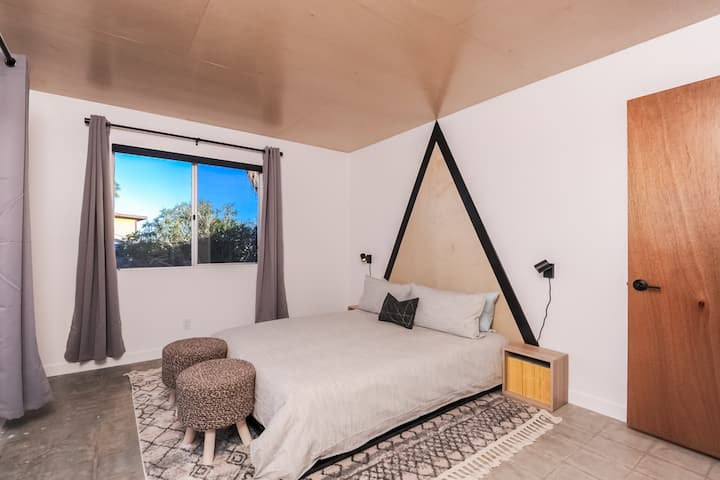 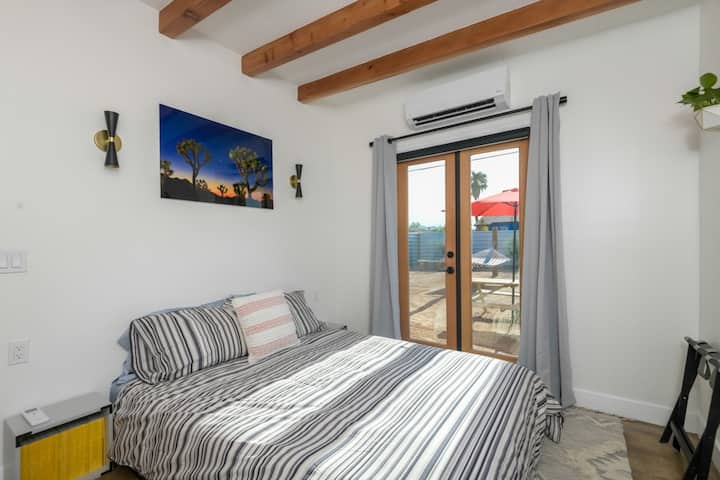 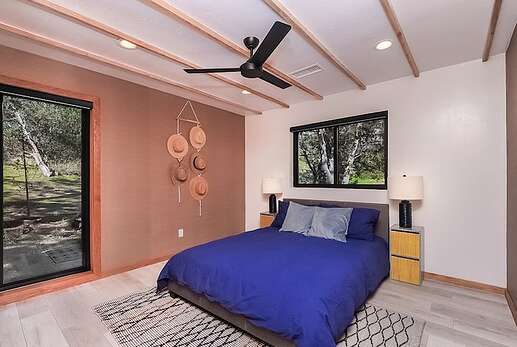 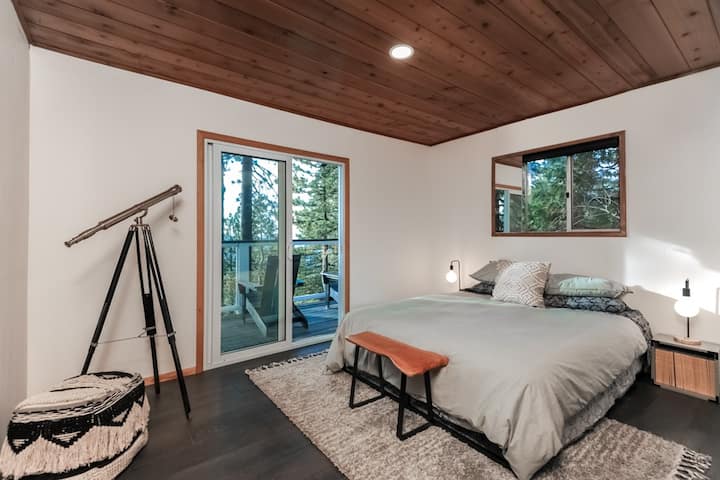 I think you’re 90% there with how it looks now if it were my listing. Although, there’s a slight downward slope happening with the books the way you have them arranged (which I’d bet you did on purpose, cause you like that sloping look/arragement).

I would organize them in consistent height per shelf. Then all at different consistent heights on the next shelf. I would also do 100% books only (so you need more books). All the sudden it will start to look like art when arranged this way. The major rub: you will have to be on your crew to be sure they rearrange the books each time as guests take a book and not put it back where it should go. But it can be worth it.

And like others have said, market the hell out of this little “library.” It’s cool!

despite what a few commenters have suggested, I’d be putting them into colorblocks. It looks more like art, and as it’s not for your personal use there’s no need to have them organised by author or even size. I generally have my books organised by author but in my office I have one shelf where i keep books that are black, white or neutral, and I have to say that little shelf is very pleasing to me. the simple colour palette is more relaxing that if it were a jumble of brightly coloured books. Just offering an example of how it can work and not look contrived. 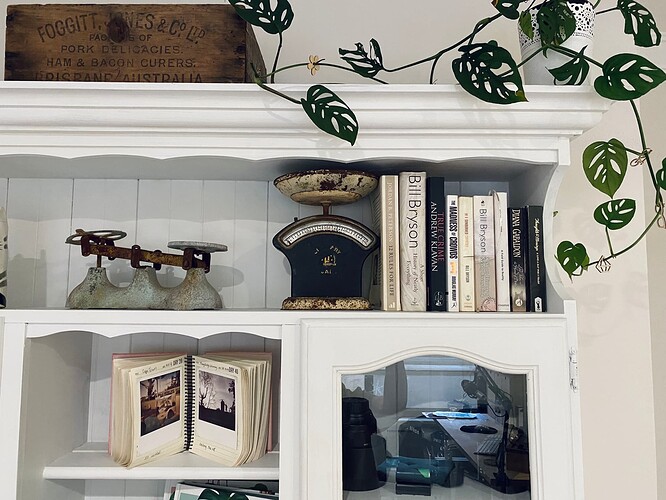