What if you found drugs or other questionable substances after a guest leaves?

We had a single person book with us and left the place kinda messy and we found some stuff that could be drugs... maybe meth... but we're a little naive on that front. What would you do? Also, we have not left our review yet... any thoughts there?

We had a gal who booked for one person, two nights. She mentioned that her home was getting remodeled… she is pregnant, and couldn’t be there with all the debris.

Over the course of the two nights/days we saw several different cars and male guests coming/going. At one point we could hear at least two men speaking in the basement. Nothing crazy. The extra car, different than the one the guest showed up in, was there all the first night, and the second night there were two cars in our driveway.

When they left, there were two beds that were used, as well as a sheet (not one of ours) sloppily folded and left on the couch. The couch had a ton of hair on it (we have a no pet policy), and it appeared that there was a lot of hair on the sheet as well, and that’s where it was coming from. Also found a bunch of pet hair on the carpet.

Now to the meth part… I’ll just start by saying this totally may not be meth, but we googled what meth looks like and what they left behind looks a lot like the pics of meth on Google Images.

There was a pen box by the side of the bed. See the attached pics. Also, in the cup holder, on the living room couch, there was a tiny baggie, about 1.5"/1.5" with powder residue, and some uncrushed pieces of the rock looking substance. The baggie texture feels rough as though the rocks were crushed in the bag.

What do you think… is this crystal meth?

Should we turn this over to the police? 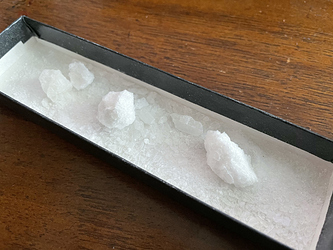 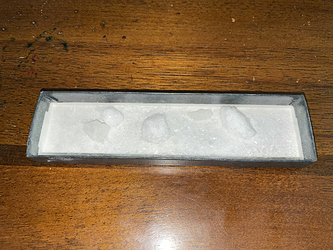 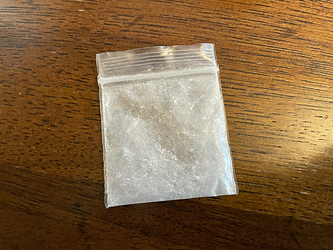 Side note: We have 5 beds + 2 air mattresses available and request that people not sleep on the sectional (excessive wear and tear on our last couch required us to recently buy a new one and it was a couple thousand dollars). It seems that they must have spread out that sheet they brought, all over the couch b/c there was hair everywhere. Maybe it was for an animal to sleep or maybe a person slept out on the couch. I guess we’ll never know. ¯\_(ツ)_/¯

Sell it and supplement your STR income!

For the future, I would install an external camera at the front door so that you’ll know how many people and what animals guests attempt to bring in. Of course disclose that camera in your listing. And then I’d monitor that camera to be sure that the arriving guest(s) and their animals are acceptable, according to your house rules in your listing, your published maximum occupancy, etc. If not, I’d take steps immediately to cancel the guest’s booking.

As for what to do now, I hope other hosts who might have more experience with this particular situation will advise you.

To be honest, I’d do nothing. Not now that you have the photographs, that is. I’d throw the stuff away and move on to the next guest.

That’s probably not the absolutely correct thing to do, but it’s certainly what I’d do.

I’ve found syringes in one of our apartments and not known whether the guest was mainlining or simply topping up her insulin. Whichever way, I just threw the stuff away and forgot about it.

I have no idea what meth looks like either but it’s odd that they’d leave something which (I assume) is pretty costly. Chances are they won’t ask you to send it on to them,

Flush it down the toilet and raise my prices.

Your police dept may have a safe disposal box for drugs. Ours does, in the vestibule of the police station. They publicize it asking folks who have leftover prescriptions to drop them there and keep them out of the sewer system, especially treatment plants and eventually the ocean.

Most local police depts these days have a web site.

Make sure that when you review them give 1 point and “would not host again”.

My first thought was to call the police but then after thinking more about it, I would flush that substance down the drain and move on.

If they are low lives, I wouldn’t want to stir by pot by calling the police and have the former guest and her friends come back to smash my windows.

I think you should consider youself lucky that nothing huge happened. Perhaps you should think about hosting longer stays.

, I would flush that sudstance down the drain

See above recommendation by NordlingHouse to dispose of it through your local Police. Flushing drugs into what eventually becomes our water supply is dangerous to humans, animals, and plants.

You should call Airbnb tell them about the situation and send them the pictures so you can have these people blocked. You sure as hell do not want them coming back again. That is what we did when we found two crack pipes at our place.

Do not flush it down the toilet! And don’t throw it in the trash. It needs to be dealt with responsibly.

There is likely a safe drug disposal program nearby. If you have 311 or something, you can call that and find out where to dispose of it. Otherwise, your non-emergency police line will be able to direct you.

look at it as a tip…

no, we do not need drugs in our water supply. Call your local police - they will have a drop box for things like this.

what goes down your drain or toilet ends up in your sink eventually, one way or another…

I remember reading years ago that the water coming out of the faucets in some places in the US had quite detectable quantities of Prozac.

I would be worried they would be wanting it back, and for the child shes carrying, I would notify police

look at it as a tip…

These sound like people who were homeless and looking for a place to stay for a couple nights. I’d take the suspected drugs to the police department and give them a guest score of 1 and “don’t recommend renting to them”. They obviously (and without care) knew what they were doing.

This isn’t crystal meth. And if it was, they wouldn’t have left it behind. That is quite a substantial amount. It looks more like magnesium! Lol. But seriously, send it to me. I will test it and let you know.

The sheet sounds like it was for an animal.

I thought…nah, this sounds like an urban legend…I know its dangerous to google but lo and behold the coincidence! lol 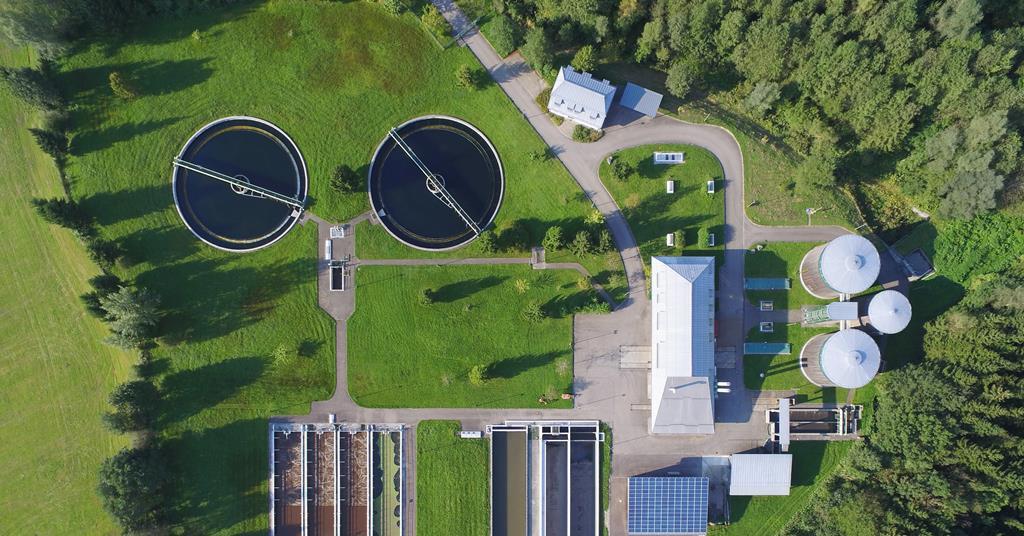 Prozac and methamphetamine likely responsible for toxins in tap water