Two cancellations in one week for hurricanes

So this week was pretty booked then I had two cancellations due to hurricanes. And the fires have to be hitting lots of CA bookings. It’s a hellish year, eh?

It is, but so far we’re all vertical with a pulse, so we’re all doing better than many.

Yours, Mr Glass half full of Jerez,

so we’re all doing better than many.

Absolutely! Every day when I start feeling a bit sad I literally go read about one of the 175k plus Americans who have died (Faces of Covid on Twitter) and pull up my big girl knickers.

hurricanes in El Paso??? or people not willing to drive the gulf across route right now…
Knock on wood, we have been ok and the smoke is not too bad.

I wonder if Mtngal has lost her home, so sad.

not willing to drive the gulf across route right now…

I wish we had hurricanes, or at least some rain. No both were people wanting to drive from CA to Houston and having to delay their trip. They wanted to reschedule for this weekend but I have a two night booking for Fri/Sat. If my Fri/Sat booking cancels I’ll be quite annoyed.

Did anyone else have Asteroid on their 2020 Bingo card? 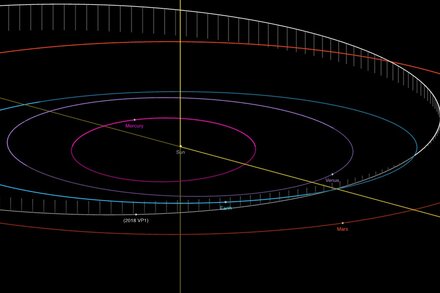 Just in Time for the Election: An Asteroid?

The object has a slender chance of hitting Earth — but even if it does, it’s too small to do any damage, astronomers say.

Just in Time for the Election: An Asteroid?

The object has a slender chance of hitting Earth — but even if it does, it’s too small to do any damage, astronomers say.

According to NASA and the Jet Propulsion Laboratory, about the only thing we don’t have to worry about on the eve of the U.S. elections on Nov. 3 is being blasted to interplanetary bits by a rogue asteroid.

There is a small asteroid headed our way on Nov. 2, according to astronomers, and its odds of actually hitting Earth are about one in 240. But the object, which goes by the name of 2018 VP1, is only about seven feet in diameter, too small to do any damage even if it hit our planet head on, astronomers said.

“Close approaches by small objects of this size are not rare, and even if something of this size were to impact, the object would not likely survive the Earth’s atmosphere,” Donald Yeomans, a senior researcher at NASA’s Jet Propulsion Laboratory in Pasadena, Calif., said in an email.

Such encounters are common, but only recently have astronomers’ eyes grown sharp and fast enough to detect them. We live in a shooting gallery, it seems. On Aug. 16, another asteroid, this one about 20 feet in diameter, roughly the size of an S.U.V., zoomed less than 2,000 miles above Earth. Astronomers discovered that asteroid, 2020 QG, just after its close passage, also using the Zwicky telescope.