I’m not seeing anything for this so I thought I’d ask.

Had some guests, they seemed nice.
They left but broke some furniture. Emailed, got denials, escalated to Airbnb, blablablah.

Later got abusive messages from them reported it to Airbnb who’s response was, bland.

So. I’ll leave a bad review which is a shame as they seemed nice, young and now clearly immature, but seemed nice. No doubt waiting until last minute to leave a stinking review themselves.

Should I put their message in the review?

Could you post the message here perhaps? It’s difficult to judge or advise, without having seen it.

No, I’m not going to post it up here as it’s got names in it.

However, needless to say it’s got mothers, wives and private parts in it.

Well you can black out offensive details, if you wanted to post the message, or summarise, but anyway. Don’t include their message, in your review, it could be grounds for removing the review.

However you can mention that when you ask them to pay for the damage they caused to your place they responded with a highly offensive message including many insults and swearing.

All your review needs to say is:

“Guests seemed nice initially, but became vulgar and verbally abusive when confronted with damages they had caused to furniture and refused to acknowledge or pay for.”

This is after they had to pay. Used another account and contacted me.

And report, flag, and otherwise blacklist the second/ new account.

And report, flag, and otherwise blacklist the second/ new account.

Yes! Flag the message. Every message has a Flag icon in the upper right. Click on that. 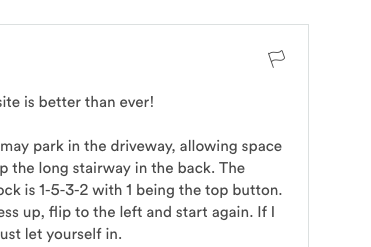 Hmm, what would I do? This is where social media would definitely be my friend

I would write a scathing and sarcastic article about the guests and include the screenshot of their message. Then social-media-it to smithereens. Childish maybe, but so much fun!

I call that the “hump, thump and dump” review from when I was in “management”:

Hump: We really appreciate your contribution to the company
Thump: However you still make too many mistakes that customers notice
Dump: Now get out of my sight before I sack you!

Childish maybe, but so much fun!

I don’t know. Is it childish to warn other people that some of their fellow humans are bad people?