Should I report the guest?

I had a guest cancel on day of check in because they were unable to park their boat in the space provided. Ok, I was fine with that… this is not a source of income we rely on so that’s fine. But they were unwilling to park the boat in front of the house because they didn’t “feel it was safe” so I asked what the issue was. There was a crew working on the water line who happened to be Mexicans. They felt like that could not park the boat on the street directly in front of the house because of this crew of city workers. It’s super quiet and secluded neighborhood near a marina so there are boats everywhere in the neighborhood. It really bothers me that the only “unsafe” feature she could find was the Mexicans working. I’m still new to this but this situation bothers me and I wonder what others think in regards to reporting a guest. What happens if you do so?

[Note: We do have a driveway directly next to our home which faces a street on a big incline and so we suggest guests do not try to park boats in the driveway. Other guests park in front of the house on the street REGULARLY with no issues.]

Yes I would report them. No refund either.

What is the impact of reporting a guest? Anything negative appear on my account or any watchouts?

I have never had a guest I needed to report, but I cannot imagine why reporting a racist guest would harm you.

dont give any refund. Otherwise do what you want you to do.

Nothing negative for reporting a racist guest that I know of. Do it. Also – NO Refund!

Did the guest say, “I can’t park there because Mexicans?”
How does guest know they “happen to be Mexicans”?

I would be hesitant to park a car or boat in front of any work crew or equipment that could possibly damage it. It really depends if they actually used the ethnicity of the work crew as a reason rather than possible damage due to the commotion of workers and their equipment.

I absolutely would feel it unsafe for my pricey toy to be parked near where construction work/equipment were taking place/being used.

As I first read your post, I immediately thought they were being racists but then I gave them the benefit of the doubt. Perhaps they were afraid that debris might fly and hit their boat.

She told me they were Mexicans. Not sure why that mattered but she felt like she needed to point that out to me.

My perspective: I don’t know why people feel the need to find out if I am or am not Mexican, but they often do. (Have always lived in a border state, so it’s logical to assume I might be chicana.) They sometimes even call me a Mexican. I don’t assume they are racist for trying to categorize a racially ambiguous person. It’s what humans do - categorize things. I didn’t assume the old white guy who said ‘you know how it is with you Mexicans’ the other day was a racist. He was talking about something he found endearing about the culture.

Unless she outright said the W-word or explicitly said something ‘racist’, I would give benefit of doubt that the concern was over damage from a construction mishap. They do happen. I don’t find it inherently racist to call someone a resident of a different country (Mexicans live in Mexico, but I digress…).

Or, maybe she is a seething racist.

Objectively, not enough information is provided here for a CS rep to ban someone from the platform IMO. This is a he said/she said and CS is known to be highly guest-centric (often even with strong evidence on the host’s side of the story), so consider also how you value and choose to expend your time.

I love your reply. Thank you so much for your perspective. Your perspective helped me to see things more broadly. (Which is why I posted my concern because I needed other points of view so thanks to everyone who has responded so quickly!)

They didn’t say they were concerned because there’s a work crew; they made a point of pointing out a specific nationality.

When someone is concerned about the safety of a boat because there are “Mexicans” working on the street, they are following in the racist context of Trump. He has made people afraid of hard working immigrants.

(he and) They should be called out and reported for it.

@brinastrang: If you report it, the guest will probably receive a standard notification from AirBNB legal describing their nonDiscrimination policy for both hosts and guests that they need to comply with. If they continue with such behavior and other hosts report them, ideally they will be removed from AirBNB. But maybe the guests will learn something and think better the next time.

It will not impact you as a host. 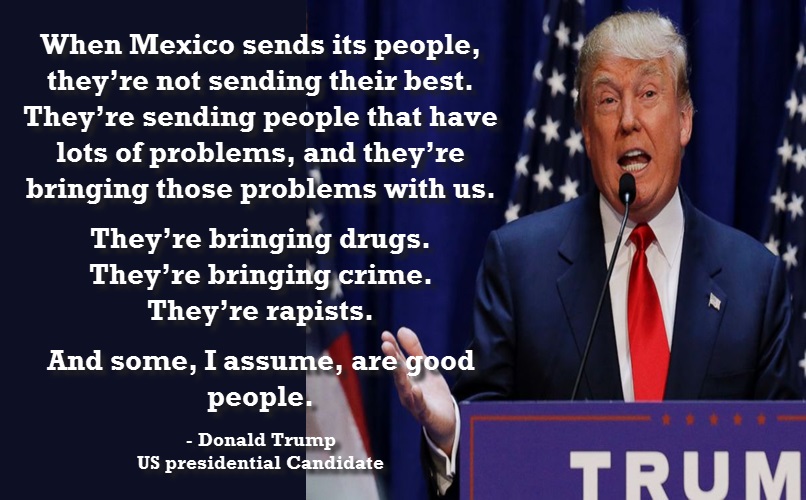 @HH_AZ - That’s precisely why it stood out for me. There was absolutely no reason to point out that they are Mexicans. If construction was the issue then I really wish she would have mentioned that. She also never stated concern over the boat or truck being parked near construction but the safety of her expensive equipment. (Which, by the way, is directly in front of the home and most windows face the road so everything is in plain view.) When I asked her why it mattered that they were Mexican she didn’t have a response and back tracked. Thank you so much for your response.

And people who make comments like that don’t even know whether those people are Mexican or not. They could be Guatemalans, El Salvadoreans, Hondurans, etc. But as far as they’re concerned, it’s all the same. They’re speaking Spanish and they aren’t white.

its actually very hard to report a guest, there is no feature for it on website. but you can report hosts!

So you have to post a message to CS. When you do they frankly couldnt care less.

I had a guest with a false identity. They didnt want to know had no mechanism for dealing with it. I had to continual press the issue and force them to take it seriously even then they only paid me lip service.

In airbnb eyes the guest is the customer and host are 10 a penny.

So I wouldnt bother, it will not acheive anything and likely be a waste of time.

If they were city workers, I guess I’m surprised that the city would have hired non-citizens. Also surprised they identified themselves as Mexicans.

No, you are reporting a violation…not your bad.