Pillow shams—do you use them?

Thinking about this because I’m pretty sure my recent guests slept on our pillow shams. I was under the impression that pillow shams decorative only, and you take them off before you sleep on a pillow, but this may not be universal. Do you find that people sleep on pillow shams, by and large, or take them off?

If people are sleeping on them, I may decide to do away with them because they’re one more thing to wash. But it would be a pity, since I think they make the bed look gorgeous and I was planning to use them in all my photos.

I’ve given up on them entirely. I put 4 sleeping pillows on each bed. Decorative pillows just end up getting thrown on the floor and have no real function. I used to use them for aesthetics, but properly positioned, sleeping pillows look fine.

Either way you will have to wash 4 covers.

I do but only because other hosts here have explained it to me!

Although I’ve lived in the States for many years, I never came across then in England or anywhere in Europe.

But if they’re on the bed, they’re going to need washing after every guest - everything does.

I use them. I have very thin simple ones that are little more than pillowcases. They get washed between guests. It’s just one bed so not a bunch more laundry. I also put a pillowcase or pillow protector on the pillow then put it in the sham. So if they use it for sleeping and take the sham off they aren’t sleeping directly on the pillow.

I would not use any thick, fancy, hard to launder shams. 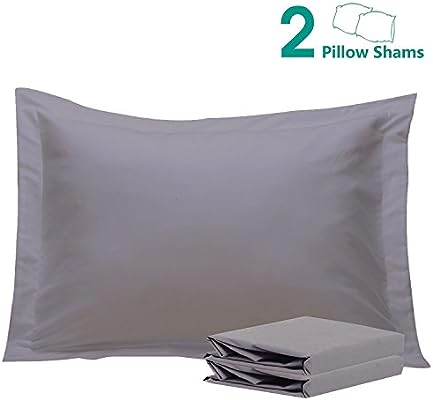 Specification: 20x26 inches  Set Including: 2x Pillow Shams (Pillows are not included.) Shipment:  Our pillow shams are shipped by Amazon, when you place an order, it will be shipped within three days ...

Let’s just say they are a different style of pillow case. Instead of open at the end they are open in the back and fully conceal the pillow. I use them as they give a finished look to the bed and I wash them with all the bedding after each guest.

I’ve never heard of them, but I’m not surprised people sleep on them if they are pillows

As a guest, not knowing if the shams have been washed, I don’t even want to think about them, never mind touch them. I hold them in the corner and place them somewhere out of sight.
Maybe it’s because I’d never encountered them, growing up in Australia, but I find them a wasteful, unnecessary addition to a pristine set of four pillows arranged to stand to attention at the head of the bed.
And then there’s the connotation from the very word, Sham:
Dictionary
sham
SHam/
noun
noun: sham; plural noun: shams
1.
a thing that is not what it is purported to be.
“the proposed legislation is a farce and a sham”
pretense.
“it all turned out to be sham and hypocrisy”
synonyms: pretense, fake, act, fiction, simulation, fraud, feint, lie, counterfeit; humbug
“his tenderness had been a sham”
a person who pretends to be someone or something they are not.
“he was a sham, totally unqualified for his job as a senior doctor”
synonyms: charlatan, fake, fraud, impostor, pretender; More
quack, mountebank;
informalphony
“the doctor was a sham”
2.
North American
short for pillow sham.

Origin
late 17th century: perhaps a northern English dialect variant of the noun shame.
Translate sham to
Use over time for: sham

We use them. Most of our guests don’t sleep on them. We also have Reading Pillows on our guest bed – the bright blue pillows with arms behind the sham and the regular pillow:

How are they different from a pillow case?

I have a lot of shams some of which I sewed myself. Not the decorative kind with ruffles and upholstery fabric, the kind without ruffles and of cotton, to sleep on and then wash. Over a pillow protector as others do.

I have two regular shape pillows that have non opening decorative covers that match the curtains (sewed myself). They will need to have pillow cases put on to them if they are going to be used as part of the 4 required pillows, or else they can be put away into the closet. If they wind up used looking then out they go and just get the protectors and cases.

I supply 4 pillows on my double and kingsize beds. They are all sleepable on, so all get washed and ironed. I have some decorative pillows that I assume people will use to prop themselves up if they are watching tv in bed, they don’r get washed quite as much, but they would be horrible to sleep on. I think a sham is a American thing, cross between a bed pillow and a decorative pillow. I would not use them, as if you only supply 2 sleeping pillows, people will use the shams.

Yes you would have to wash the shams every time because people will probably sleep on them. Bedspreads and blankets are also a problem. I like to offer an adjustable warmth layer over the duvet. However sometimes guests move them so they are in contact with their skin or at dribble level so I end up having to wash them as well.

people will use to prop themselves up if they are watching tv in bed, they don’r get washed quite as much

I’m afraid that I’d have to wash them every time. Just the fact that a body / hair / face has been in contact with them is enough for me.

Pillow shams? I’ve never heard about them, even you explained, I still had to google it to see the picture.
As a guest, I would sleep on them. I wouldn’t think of take something off the pillow before sleeping

IMHO pillows with shams are seldom slept on. Most folks just move them onto a chair for the night and use the ordinary cased pillows to sleep on. I still wash the shams with every change over; likewise the quilt, pillow cases and sheets.