Who the heck goes to the Big Island and wants to stay in Kona?!

Right? I’m from a desert so I prefered Hilo. And I rented a car to drive over to Kona for about 3/4th of a day. And still had time to drive back before sunset. It’s a big island to many, to a Texan, not really. LOL.

Well, I had never in my life heard of coqui frogs before and now I know about them from two threads on this forum! I feel I should visit Hawaii just to experience them.

Nature noise is a difficult thing, isn’t it? You can hardly march up to the Frog King and say, “Erm, excuse me, but could you ask the guys to keep the noise down a bit?” and you can’t really complain to the town council about them …

Well I love South Kona but when I think of Kona-Kailua, I think of Costco and Walmart which are great for stocking up, but I couldn’t wait to drive away from there. It wasn’t until Captain Cook that I felt like I had finally arrived in Hawaii. What a beautiful area… sigh.

So I want to know, if a “noise” isn’t something unique to your space but may be unique to your area, do you disclose this “noise” and how do you go about it?

. The noise isn’t unique to our space, but unique to all apartments along that highway

. I don’t think that reasoning lets you off the hook

I decided to somewhat manage expectations somehow by mentioning the “central” location next to the highway, but I decided not to specifically mention the noise because I didn’t want to scare away people. In the end about 10% of our guests mentioned it in, mostly, private feedback. I can’t blame them. Destiny got us to living in that place, but I also still totally hate the noise, and I can’t wait for our renovation to finish so we can move out. (For those interested: They are finishing the new tiling tomorrow

In your case I would certainly mention the vivid wildlife (frogs chanting, bees humming,…) but I would NOT specifically mention that the noise is loud and unbearable.

It’s a tough one because these frogs do NOT chant. They SHRIEK. The decibel level is 90…about the same as a lawnmower. There are few nature lovers who like them, but for most of us, they are an obnoxious invasive pest. She probably needs to say some disclosure about the frogs… something along the lines of what I suggested. They are crazy loud and not pleasant. Brittany, have you tried spraying baking soda around the perimeters of your yard? Our subdivision has a sprayer and we have managed to keep most of them at bay.

There’s also the idea of paying kids 25 cent bounty for every frog they capture. Don’t you wish chickens would eat them?

They originate from Puerto Rico and in fact when I have heard the mayor interviewed I can hear the frogs in the background. I don’t think they are as horrible there because that island has predators and this one doesn’t.

sure wish there were some predators!

Send some Thai people in, I saw quite a few

in sticks on the grill last visit to Bangkok! Or a few French chef

tour groups for some

It’s not really a matter of disclose regarding the frogs. It’s a matter of describing the environment and what you’re likely to hear if there are chickens and frogs many people would find that very appealing and be drawn to it others would find it bothersome. Just because you’re in the rainforest doesn’t mean that people who are uninformed visitors realize that means that it actually rains. Not everyone is well read before they go places and they have no idea what to expect. I try to put out everything and if people bother to read it I even tell them it’s not the Ritz-Carlton. It’s a very simple home with a very simple style of living but it’s very clean and very restful and calming. It also has all the amenities of WiFi really good hot shower comfortable bed and uncluttered room with reading lamps and a desk. Good luck with your listing

Maybe you could pimp them out for people who want their guests to leave early?

Honestly, it is a rarity for someone to hate the sound! There is even a coqui frog soundtrack on youtube that my guests have said " ohh I can’t wait to listen to this at home!"

I’ve tried all kinds of traps, sprays, and hunting but we’re ground zero for the invasion. Winter it settles down a little, but it is like white noise once you live here for a while. Most people think it is a night bird! I checked out the other listings in the area and no one else mentions it. I am attending a host meet up later this week and I intent on asking other hosts how they prepare guests for the symphony at night

It’s weird, but one going off is more annoying than hundreds. We have one two doors down. Neighbors gave up on trying to get him. He stops if he hears noises, such as me walking down the street in the other direction!!
I may have to get out my headlamp, oven spray and baggies. If my son were here, he could get him.

I was just messaging an future guest and came across something on Airbnb (along the lines of “How to Prepare for Your Guests”) so I checked it out. It gives lots of tips and one of them is (not verbatim): “If there is any noise that may disturb the guests/affect their stay, be sure to let them know beforehand”.

But but… that is so subjective.
Do I have to disclose:

You may hear whales making a ruckus in the bay below.
You may hear little bats squeaking as they fly around at night.
You could even hear surf crashing! Oh my, bring ear plugs or I will be happy to refund you because you had to listen to surf crashing!!!

You might hear mynah birds squawking as dawn breaks.
You may hear the fridge humming in the room!

You may hear…blah blah blah.

This is why Air guests have become so entitled, spoiled and demanding.

Then again, things like construction next door to me, is something I would disclose beforehand.

You can’t control nature and if dingbats are going to complain about the waves, then…GAH. Yeah, I know…

But but… that is so subjective.

I agree. Most guests perceive our neighborhood as very quiet. However, I’ve had guests from rural areas who are surprised that we can hear our neighbors talking.

I sure hope that Airbnb doesn’t start chastising hosts for not disclosing noise. My neighbors don’t tell me when they will be doing construction.

(but apparently some guests expect us to be)!

You might hear a kookaburra or a possum mating, maybe some crickets or a truck delivering milk, a
bus might come past (the same one that is listed 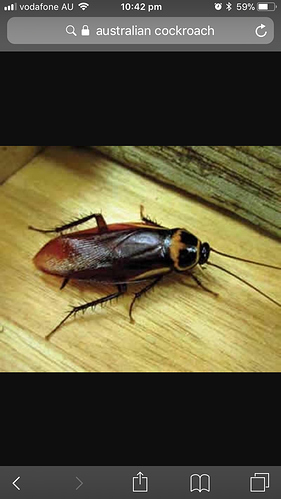 . I might get up for Yoga at 6 and use the loo, I might sneeze or crack open a bottle of champagne

for my birthday. A lot might happen. As they say if your coming to Australia

That looks similar to the Hawaii Island Palmetto Bug!!! Which is a much nicer name than “large, flying, but harmless cock a rocha! “