New listing, bad review outside of my control

Hi fellow hosts! Love this forum as a great source of information!

We have recently started listing our investment apartment full time on airbnb (after listing another place for 6 months a few years ago with much success, so we do have some experience) and our first guest has just left. They left us a lovely note talking about the decorations and furnishings, how they were made to feel welcome etc but also how our rowdy neighbours had put a dampener on the trip as they were so noisy on one night. This night also happened to be the night of a local festival.
We just got their review and they gave us 3 stars with a one sentence review, “noisy on weekends, quiet on weekdays”. I have responded with a nice comment and I suppose there is nothing that can really be done and this is more of a vent- we have really put a lot of thought into the place in terms of how it looks and feels, it’s spotless and I always respond to messages immediately. Could these people have not written a few things about that rather than lament on one noisy night (for something that is outside of our control?)

On another note, do guests give ratings on all aspects now or do they only get to rate overall? If they can break it down (as they used to), is there a way we can see this?

And on a final note, any tips for our new listing would be much appreciated 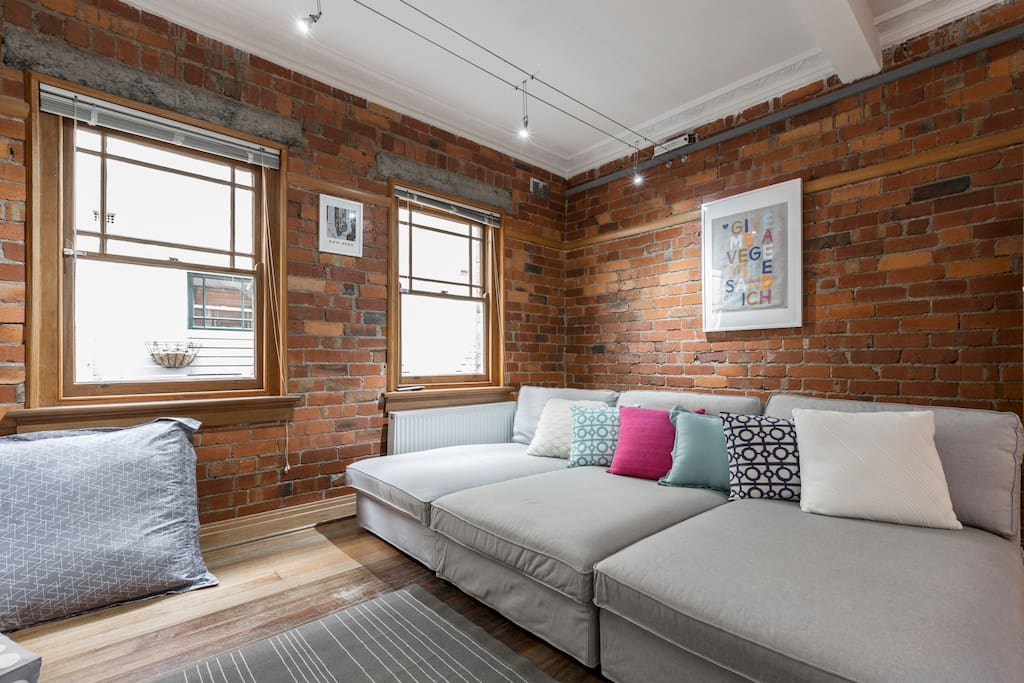 The important thing will be, what stars did they leave? I thought your response was nicely done. And for me, the amazing number of misspelled words in the short review would make me question that validity of that review. [Yes, I am a bit of an elitist.]

I track my stars in a spreadsheet. They are what matters… you need four more reviews before your stars are public.

p.s. That apartment doesn’t look much like a Brooklyn warehouse. Funny choice of comparisons.

Thanks @smtucker - they gave us only 3 stars (which I thought was a bit undeserved) but that’s good to know they don’t post stars until 5 reviews- hopefully our next four are much better! (and I laughed at your comment on the number of misspelled words).

Isn’t that funny? Brooklyn is so many things to so many people. I was born there. My cousin lives in a real warehouse there now, and it is rather rudimentary compared to your lovely apartment.

I like the looks of your space. I think that you will recover.

it’s spotless and I always respond to messages immediately. Could these people have not written a few things about that rather than lament on one noisy night

Unfortunately, they usually don’t. As much as I hate to, I have to sympathize with the guests–just a little

They’ve spent a fair amount of money to enjoy your wonderful place but couldn’t do so fully. I would have been surprised if their rating were anything different. And speaking of ratings.

It’s my understanding that “overall experience” is the one that counts the most. If it goes below 4 I think you get a scolding from Airbnb.

Have you spoken to your neighbors? Are they usually noisy–even if they aren’t boozed up after a festival? If they are generally noisy, then you have to disclose this in a careful way in your description.

Thanks @J_Wang
Regarding the “overall experience”- I can only see these ratings now. Has Airbnb taken away the breakdown of the others (eg cleanliness, value, location etc? (I have 30 reviews altogether (29 for our other property) and can’t see a breakdown anywhere).

The format has changed… we no longer get numbers but instead, there are percentages [which are not accurate.]

there are percentages [which are not accurate.]

Thanks for the update. I have seen, out of the corner of my eye, that percentage. I try to never look at any of the rating stuff, including individual reviews because it’s too annoying.

I present the best product I’m able to provide and that’s it. It is what it is.

@jodes - Our place is usually very quiet, but one set of guests were unlucky enough to be there when a wedding was going on nearby and the revelers made noise late into the night two nights (our guests were there for a week). We were lucky that they still gave us five stars, but mentioned how noisy it was on those two nights.
My public response was that it is extremely uncommon to for it to be anything but quiet and peaceful (it is - no one else has ever said a word about a problem in 4 years), that sometimes other guests in the area do get carried away and enjoy themselves a little too loudly, and that we’ll help out in the future if the noise goes on late at night (we’ll go to the noisy place and ask them to turn it down).
Maybe a response like this would help? It won’t fix the three stars, but it may help the next potential guests put less weight in this review than the future (hopefully five-star) ones.

Am I right in thinking Airbnb asks guests to ‘tell (host) what you loved about and what you didn’t about their place’ (or similar wording.
If so, they’ve clearly just taken that very literally and maybe didn’t realise this would be the whole public review. I totally get your frustration though!

I think your response is great! Makes it seem like it’s not a bad review and that he just left a lot of detail out

Ohhh you make a really good point @gardenhost ! I notice in all his communications he’s been really short also so I think you could be right on the money

Hi Jodes, very sorry this happened to you. I looked at your calendar and find out you are well booked for the next few months. I hope the incoming guests leave you wonderful reviews so the bad one will be buried.

I agree with @Freya. You’ve go heaps of bookings coming up so don’t worry about it. This bad one will eventually wash out.

Your flat is beautiful. Seriously, it looks like something out of a magazine. You will have no issue washing out this review. There are a couple of questions - is there any way of getting air con? (We’ve had our first humid day in Perth - and it’s oppressive). Also, what is Art Deco about the apartment? I agree with @smtucker that it doesn’t look like what I would expect from a Brooklyn warehouse…but it is nevertheless a lovely apartment.

I’m also in Melbourne and if I was you I would want to slit my wrists and punch his lights out - obviously not literally!
You have a beautiful apartment in the heart of a vibrant area and someone complains about the noise from the large annual festival…but worse has nothing positive to say about your gorgeously appointed place!!!
I have had the same issues, we should meet for a wine!

I think your reply was very well done, so far I have heeded advice and not responded to poor reviews but it’s tough, you put your heart and soul into making the place perfect, and you get that type of review. We understand your frustration.

And for me, the amazing number of misspelled words in the short review would make me question that validity of that review.

It’s nice to know that I’m not the only one who judges people based on their spelling.

And I’ve now had two recent guests, one Chinese, one Indian, who misspelled “quiet” as “quite”. Maybe I’m a freak, but I don’t understand how that is possible. I wrote a nice message to the Chinese guest suggesting she fix it. I probably shouldn’t have, though…

@jodes: your guest had an impressive number of errors in one short sentence. Maybe you should congratulate him.

I am quite forgiving when people are not using their primary language. Interesting… I have had three sets of guests who have asked me to correct their English, but in reality, they wanted some corrections, not all of them. This forum has plenty of posters who misuse those two words as well. Don’t get me started on to, too, and two.

Thanks so much for your kind words @Ash953 ! It makes me feel a lot better!.
Regarding air-con- we were actually there last week for a REALLY hot day (it wasn’t quite 40 but close) and my brother in law walked in and said, “wow, it’s cool in here, great air-con”. I said, erm, we don’t have an air-con, and in fact, we don’t even have fans yet. He was stunned and actually didn’t believe us as it was legitimately nice and cool in there. I guess that’s what you get from these old well built buildings on the ground floor! (Although not sure how it would go for numerous hot days in a row).

Interesting question also about Art Deco- generally (although I realise incorrectly), anything built in the 20’s/ 30’s/40’s seems to be called Art Deco and we included it in the write-up as I think the bulk of the audience would associate Art Deco with “any building that is old” as opposed to what Art Deco actually is ! (Although now you have me thinking I should change it

@poppy thank you so much! I appreciate your sympathy

I’m in Hawaii in a very “mixed” neighborhood. There is a guy who is fixing up his muscle car for racing and every Sunday he revs the engine up and takes it to the speedway. It is about a 10 minute process that is like clockwork. If I have guests that are bothered by it I usually try to spin it into a positive like, " Ohh he’s got it running! He’s been working so hard on that old car what a great accomplishment" or something of that nature to spin it. If you knew there was a festival or if there is one in the future, you might want to spin it into a positive like, " Are you going to the festival?No? Well let me tell you, this is a yearly event that is A-MAZING and you’re within walking distance!" Maybe that way you can get in front of it a bit and redirect it to a positive.

On Air Con: We are in Canada and have a similar old (1902) brick building with no Air Con. Usually it is lovely and cool. But last summer was a heat wave and although the listing was clear on no air conditioning we were dinged in the reviews. Now with every booking I confirm through Air with the guest that we do not have air. Hoping not to repeat last summer’s experience!