Just got my latest review, everything 5 star but location, which made the overall a 4 star? 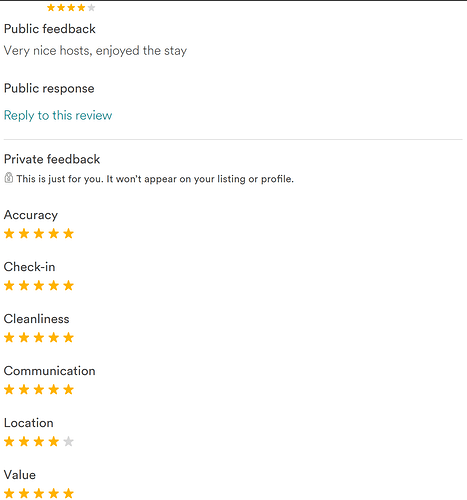 The Overall star is a separate score; not an average of the others.

So despite thinking everything was 5 star, they seperately thought overall was 4? Sounds like they should do averages then.

Just not the way it is done, and I don’t expect this to change. Overall will include the non-definable as experienced by the guest. It is highly subjective, of course.

I’m finding people who don’t book far in advance give the worst scores, this was a guest who totally was my definition of a perfect guest but booked a week out.

I’ve noticed similar trends, @n3rdw0p. But, as with anything Airbnb, generalizations don’t apply to everyone! Some people who book last minute are super picky, but some are completely wonderful.

I also get more 4 stars for location than I would like - I try to describe that the area is not fancy and the main selling point is < 1 mile from a 24-hour subway station in a major city. Most guests find this “close” and “convenient” but occasionally someone says it’s too far and not hip enough.

It’s too bad the guest rated you 4 overall when everything else besides location was 5 stars. Unfortunately this is just one of those things that happens with reviews. I recently added a line to my pre-acceptance message saying that if anything is not to their standards for a 5-star experience, either at arrival or at any time during their stay, to please let me know. Since then I still get 4 stars occasionally in one or two categories, but I’ve gotten way more 5-stars for overall experience.

My location is in the same situation, I’m 1.5 miles from the most popular tourist areas with a bus less than a block away that takes you directly there or the more popular option for tourist, the streetcar, which is 5 blocks away. Still wish it was more detailed about why they dinged it a star. Would it be rude to ask them now that we’ve already reviewed each other to get specifics?

I don’t see why you can’t ask them privately … I’ve done this when a guest has left 4 stars for cleaning because of “dust”! But whether you get an answer is another matter. If they do answer and it’s nothing you can do anything about (unless you want to move your house!) then it gives you the chance to make sure that whatever the point is, is highlighted in your listing.

People are strange though - I’ve had all individual 5 stars and then a 4 star for overall experience. I guess people think: well, the Ritz Carleton (substitute your favourite luxury hotel) would be 5 star, so this modest apartment couldn’t possibly be as good as that!

I don’t think that’s rude at all. I once got 3 stars from a guest after great communication and seemingly genuine satisfaction with my service. When I asked about it afterwards I found out he fat-fingered the stars while leaving a review on the mobile app in a hurry. It was after the review period so Air wouldn’t change the ratings, but it gave me a little reassurance that I’m still doing well.

I have also sent messages to several guests who gave 4 stars for location after the review period, asking for details so I can adjust the listing to better prepare future guests, and none of them ever responded. Good luck!

Professional sounding. I would love it if they said, move your house.

I have also sent messages to several guests who gave 4 stars for location after the review period, asking for details so I can adjust the listing to better prepare future guests, and none of them ever responded. Good luck!

Ha! So annoying. Are the places in your area closer to the beach and closer to the hills are also priced higher? I feel guests have unreasonable expectations about where they can stay at a certain budget level - central locations, close to attractions, cost more. It’s not that complicated.

I like your suggestion about how to word the request for more info, thanks for sharing!

The places closer to the beach are priced higher and do not offer parking. The places closer to the hills depend on which hills. The overarching problem for me is the geography of Los Angeles, CA. No matter how we state in our listing that L.A. is sprawled and public transportation is inefficient people don’t grasp it until they experience it. Many guests whine about how long it takes to get from one place to another here. I thought that would be the first thing anyone who plans to visit L.A. would hear about it.

If only they’d notice the estimated location map at the bottom cough cough we all wouldn’t have this problem.

In the case of Los Angeles, they look at the map and think our place is close to all the popular attractions because it is fairly equidistant from them. The problem is that as one guest said, “When I looked at the map, it looked like I could walk from your house to the beach and to Hollywood.” This is despite the fact that in our listing we detail how far we are from most of the popular attractions in miles and kilometers. People just don’t get how sprawled and congested L.A. is.

Maybe they think the magic of Hollywood will bring them closer to the beach! I’m surprised you don’t get marked down because you didn’t introduce them to Brad Pitt or Angelina!

I constantly get guests who mark me down on location. One actually said it was because they didn’t realize how big the Big Island is and they had to drive a lot.

That’s funny. I’ve had many guests ask me to tell them when and where to see stars. I always have to explain that it’s not something you can schedule. The only exception was when I told a Schwarzenegger fan which church the Governator attended and that he supposedly goes to mass whenever he’s in town.

Hmmm, yeah. I hear you on guests just not getting it. Maybe you could try adding average traveling times at high-traffic times of day (is that literally every time in LA? I have heard stories but haven’t spent enough time there to know) in addition to distances?

I remember visiting San Francisco and looking at a map and thinking “Ooh! These places are all a mile from where I’m staying, perfect.” Of course a mile walk uphill in San Francisco is very different from a mile walk through a flat city. I of course knew this beforehand and didn’t blame my host for it. I just tried to enjoy the extra exercise and filed it away as something to remember for next time.

Kevin Spacey is my favoritst star ever. I’m going to book your place so I can meet him!!!