I had a strange thing happened yesterday when my guest arrived to check in – she entered the code for the door that I had given her, but it didn’t work. She messaged me, and I was able to give her my cleaner’s code and she was able to get in with no problem (she was suuuuuper chill about it, too, thank goodness).

My cleaner was the one who put the code in, and he had actually confirmed with me earlier in the day that he had put it in, so I was baffled. When I messaged him about it, he told me that there were two phone numbers (see photo attached) showing for the guest in the iGMS app that we use, and he just put in the last four digits of the US number. Unfortunately, iGMS picked up the last four digits of the other number and sent those to the guest in the automated message instead.

So, I have two questions: 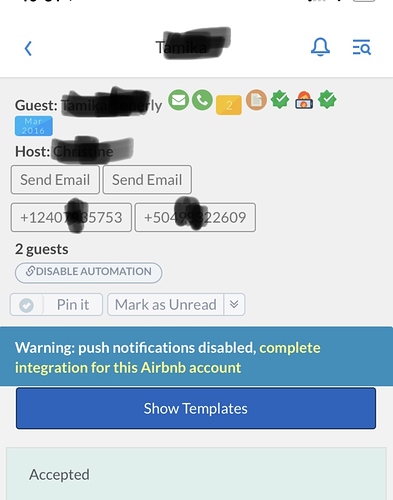 You might want to black out your complete address on the screenshot.

Ooops- thanks! More concerned about guest privacy than my own.

@iGMS - has anyone else reported this issue?

@CeeBee thanks for letting us know! Despite it’s quite seldom but it does happen that the guest has two phone numbers on the profile. We had no other reports of the issue so far.

For the timebeing what I can recommend in a rare case like that is to contact our customer experience team. They will be able to let you know the exact phone number it’s going to be sent to as it’s automatically chosen by the system. Sorry for this inconvenience!

Thanks. It’s an easy enough workaround (just use the last four digits of both numbers in the keypad) if it happens again. I’m kind of surprised my cleaner didn’t question it at the time.

@CeeBee you’re welcome! The human factor at play, I guess she just didn’t pay much attention at the time. But we’ve all learned from it.

@CeeBee here’s an update on the issue you’ve mentioned. Our development team is currently working on fixing it. The chosen guest’s phone number will be marked with a star so the hosts can easily identify it.

You can expect the fix to be available in about a month. Hope it will eliminate similar issues in the future.