I guess this is old hat for many of you but I’ve only just discovered deep in the bowels of the phone app that we hosts now finally get to see who gave us what stars. I never knew this! After 2 years of 5* I have a couple of 3* (i just knew they’d ding me) because they couldn’t get 4 hours early check in AND check out and because the birds (in the trees!) were too noisy in the morning…just as well I’m not hung up on the stars.

It’s my understanding that this is a fairly new feature and not all hosts are able to see this, at least on the web based version of Air. Would you be so kind as to outline how you found it on your phone app?

As for the people who dinged you because the birds were too loud, well, personally, I’d want to throttle them.

I can see it on the website but not the app. 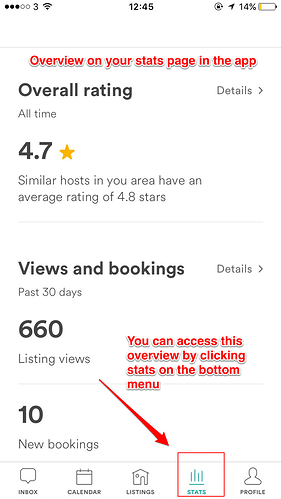 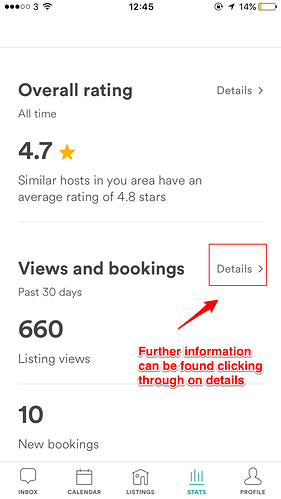 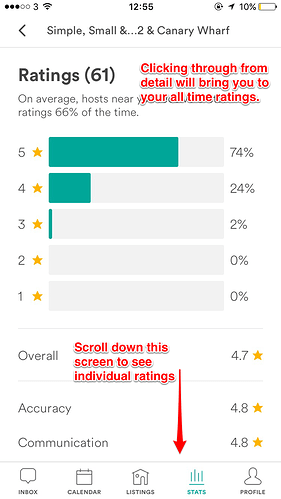 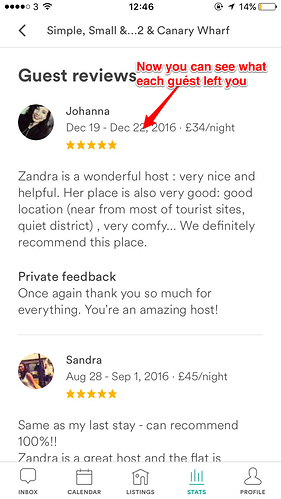 Ups, I don’t have this new feature but it seems interesting.
Does it let you see what you got in each rating category on a guest basis or is it just for the overall rating?

We were not the chosen ones who received the updated app display.

My view on the website is different to my husband’s view, which is weird.

I’m more comfortable that ABB’s weirdness is normal though.

@Zandra, thanks so much for taking the time to post those screen shots. Alas, my (updated) app doesn’t behave the same, so apparently I’m not one of the group able to see this new information.

Is it the iOs app ? I don’t have this on my android app

This is iOS yep ! Maybe that’s the difference - the type of Device you’re using. Doesn’t explain the desk top though…want to see some more snazzy stuff?

Under views and bookings I can see this: 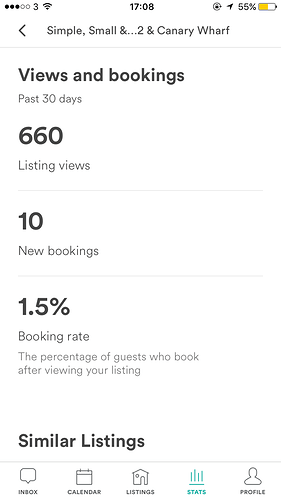 Useful way keep tabs of if your listing is being viewed. Look at how low the booking rate is though!!

I guess Airbnb search algorithm tries to even everyone’s revenue by altering your search placement in relationship to your booking rate (AKA conversion rate).

If you have a low booking rate they will try to balance the equation by giving your more visibility on searches.

On the other hand if you a good booking rate, your search placement will be bad as it seems you don’t need too much visibility to get a booking.

The algorithm itself has kind of a socialist component that tries to even everyone.

Good, bad, I don’t know but it is clear that good performance isn’t rewarded here for getting better exposure. If you want to succeed getting more exposure you should better start doing the opposite of what you think is best for your listing and your guests.

Yes, it is a wild guessing so don’t worry. There is no offense.
I have no strong argument to say what I said but just my perception of how I saw listings arranged “lately” (it wasn’t like this in the beginning). That’s why I start saying “I guess” …

If I try to play the guest role trying to find an accomodation, the first results I saw are the ones that are New Hosts, the ones that has just a few reviews, the ones that doesn’t shine as much, the ones with calendars that weren’t update in months, low response rates, etc.

Superhosts and the best listings are at the very bottoom though some of them are blended into the mix with a sort of randomness.

The goal of algorithm is keeping all of us happy which I doubt it could work well when you demote the ranking of someone who is making things well.

It sure does. Every star rating for each guest.

I’ve got android. They must have rolled out only sporadically.

How does it work for Airbnb promoting listings with out of date calendars and low response rates? You’re actually the first person I’ve heard suggesting those listings are promoted over hosts who are doing everything right …new hosts are something different they always get promoted on top of everyone else but I’ve yet to see the other matters you mentioned. Maybe @smartbnb.io has some ideas if any of this affects placement.

I have the same feeling as @florbone, in my area I see listings with low ratings, bad photos and a relatively low reply rate that rank high in the search results, and the only explanation I found is that Air tries to give a few bookings to each host to keep a large inventory of active listings.

Yes, they are doing this. You must take a look into your area.
I have found MANY times listings with crappy response rates or calendars not updated in months (years!) above my listings.

I’m not sure if there is a user here capable of confirming or denying what I’m saying. The only one who can clear out any doubt regarding this will be an engineer working at Airbnb. Still, it is absolutely clear to me that doing everything right doesn’t warrant you a great or good search placement.