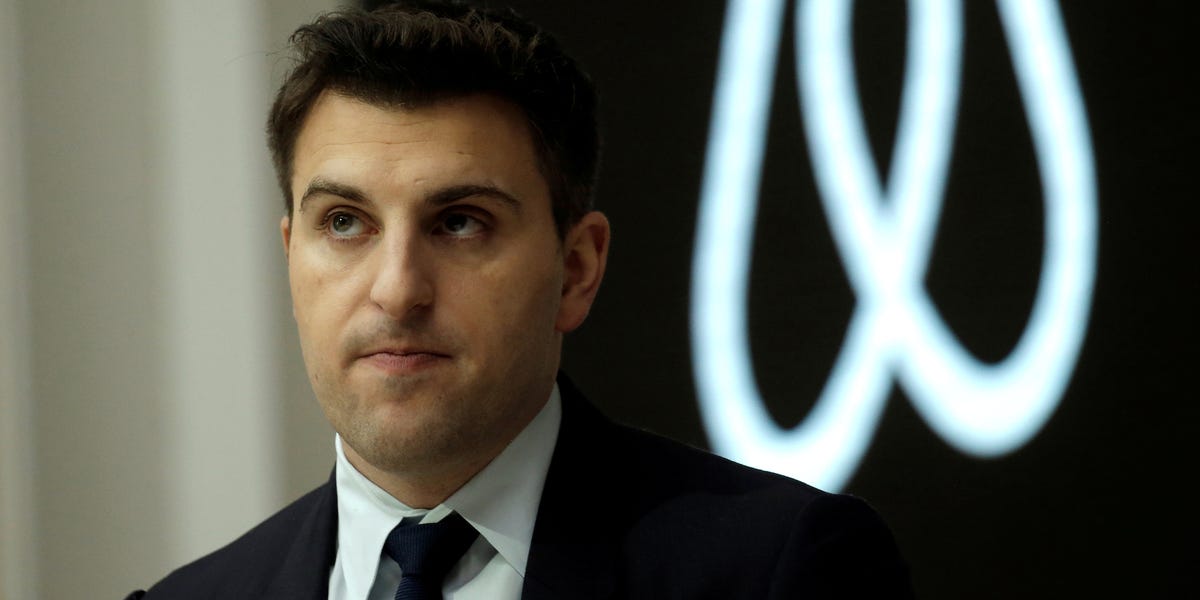 Airbnb hosts will be charged fees if they cancel summer bookings due to...

Airbnb's no-penalty cancellation policy only covers a limited time frame. Hosts who cancel summer bookings are fined and could even be banned.

I wonder if this new policy applies to IB? Hmm.

Anyway, I won’t cancel my June guests but it will be awkward for them to complete their mandated 14-day quarantine with their 6-night stays. I wonder if they’ll mention the national guard showing up in their reviews

Hosts can’t cancel any reservations after April 6? Can guests? Seems so strange when plenty of places are locked down past then.

I don’t have a subscription or anything. It does refuse to show me content when using an ad blocker though.

Deleting cookies doesn’t help, either. They were free for the first year, the paywall went up about 6 weeks ago. I think that it triggers after the 3rd article.

Here’s the content (if mods think this is a problem, I will remove).

Some Airbnb hosts have decided they don’t want to allow people into their homes through the end of the summer, thanks to coronavirus concerns.
However, Airbnb’s no-penalty, COVID-19 cancellation policies only cover a very specific period: reservations that were made before March 14 for trips that take place through the end of May.
If a host cancels bookings for June and July now, they will be charged $50 per cancellation and they could face other standard penalties, such as losing a Superhost status and being banned from the platform altogether.
Airbnb says its cancellation policies are evolving and that hosts should wait to see if will extend its them through June.

Airbnb hosts that have decided to cancel their bookings through the summer over coronavirus safety concerns may be in for a surprise.
Airbnb is currently charging hosts the standard penalty of $50 apiece for cancelling booking for June and beyond. Hosts may also be charged those fees for canceling bookings in April or May if those bookings were made after March 14.
In addition, hosts may be subject to other penalties from the platform for cancelling through the summer, including losing their “Superhost” status and the possibility of being banned from Airbnb altogether, according to Airbnb’s written policies and according to a host who was told by Airbnb that such penalties would apply to her.
An Airbnb spokesperson tells Business Insider that despite its written policies, it has promised hosts that it won’t take such actions. “Specifically, we have communicated to all Superhosts that they will not be penalized or lose their status due to a decrease in bookings or increase in their cancellation rate.”
But Superhost Laura Faulkner was told differently by customer support this week when she decided to delist the studio apartment attached to her home. It is typically booked out for months in advance, she told Business Insider.

“After cleaning in between guests in March, we decided we didn’t feel safe anymore with people coming in and out (for our own health and the guests). Additionally we had lost so much business that it started to make more sense to temporarily get a short-term tenant that could provide stable income for that unit. So what we decided to do was take our listing off from April-July to limit exposure to other people in our property,” Faulkner told Business Insider.
When she went to cancel her June and July bookings, she felt like Airbnb customer support was pressuring her not to.
“Basically I was told that if I cancelled on anyone in June or July (which is more than reasonable given how quickly COVID-19 is evolving) that I would be subject to fees and would lose my Superhost status (because Superhosts can never cancel on anyone),” Faulkner says.
The Superhost designation is earned from high customer reviews, fast communications, and requires the host to maintain a cancellation rate of “1% or less,” Airbnb says, while allowing at least 10 bookings a year.
Promises, for a limited time only
A month ago, Airbnb promised not to remove the Superhost designation or charge fees for cancellations for hosts that didn’t want people in their property. But the Superhost promise only covered the month of April, it said, and the bookings made before March 14 that involve stays through the end of May.

Reservations made between that time frame, before March 14 for stays through the end of May, are covered by the company’s COVID-19 extenuating circumstances policy.
All other bookings are not, meaning they are covered by the company’s standard policies, including standard cancellation fees. In addition, the non-covered reservations are subject to the policy that says, “If you cancel 3 or more reservations within a year, we may deactivate your listing.”
Instead of cancelling bookings now, Airbnb is advising hosts to wait and see if it will extend its no-penalties policies to cover June. A spokesperson tells us:
“We have made significant changes to our Superhost program to allow Superhosts to protect their status during this period of uncertainty. Specifically, we have communicated to all Superhosts that they will not be penalized or lose their status due to a decrease in bookings or increase in their cancellation rate. We are regularly updating our policies regarding Extenuating Circumstances cancellations and will communicate updates regarding future Superhost assessment periods. Regarding the post-May 31 reservations, we ask for patience as we continue to monitor the situation.”
But there’s some risk to waiting to see if Airbnb will extend its policy to June. If it doesn’t and a host cancels within seven days of the booking (that is, waits until the end of May), the host penalty fee increases to $100, according to the current policies. The cancellation could wind up as a black mark against the the host. On top of that, waiting doesn’t give the traveler as much time to make other arrangements.

Airbnb is currently advising hosts who already know they want to cancel summer guests to ask the guest to initiate the cancellation request. That way the host won’t incur any fees. “So far most people have been cool with cancelling, but let’s say I have a guest that refuses - then I will be penalized if I cancel on them,” says Faulkner.
Costly for everyone
The decision to allow full cancellations without penalty, even for a specific window of time, was a costly one for Airbnb and its hosts, and reportedly a controversial one within the company.
The company has limited its refund policy to a specific window in part to help the hosts that do want to continue to accept bookings and make money through the crises.
Hosts may choose from three cancellation policies from a relaxed one that allows guests to get a nearly full refund as long as they cancel more than a week in advance, to a strict one, which charges the guest up to 50% for cancelling.
Many hosts were so upset that the company allowed guests to cancel for a full, automatic refund, instead of observing the host’s fees and cancellation policies, that on March 30, CEO Brian Chesky wrote an open letter apologizing to them. The company has also set aside $250 million that promises to pay hosts 25% of what they would have gotten from their cancellation policy.

Maintaining a Superhost status is critically important for many hosts at this time, too. Airbnb’s has created a $17 million fund to help hosts pay expenses during this crises but they must be Superhosts to be eligible.
Airbnb is walking a fine line trying with policies to appease everyone but will still allow the company to generate enough revenue to ride out the storm.

Sorry, was on phone previously and couldn’t find this in Pulse (BDC App). I can’t link to it as it’s an extranet page:

Important change per 6 April 2020: By now, we can expect that our mutual customers are aware of the risk of further Coronavirus spread, and as such the risk they are taking when making new reservations, particularly Non-Refundable and Partially Refundable bookings. Therefore for all new reservations made as of 6 April 2020, we will no longer apply Force Majeure conditions for guests seeking to cancel or modify their booking due to the current Coronavirus. These reservations will be treated like any standard booking, according to our policies and procedures.

No can read unless subscribing.

Here’s the content (if mods think this is a problem, I will remove).

I don’t think we ever have a problem with free content.

No can read unless subscribing.

Brian has posted the entire article two posts above your reply here.

Brian has posted the entire article two posts above your reply here.

I simply failed to read the whole thread before responding.

Therefore for all new reservations made as of 6 April 2020

What about reservations made before April 6 for dates in, say, October? Whereas Airbnb has made an end-date (and changed it and will probablly continue to change it) of May 31, is there anything like that on BDC ?

If a host needs to cancel due to travel restrictions in their area, then you shouldn’t be penalized. But call Airbnb. Don’t rely on the automated cancellation buttons bc that might incur a penalty. Their system isn’t that smart.

For example, here’s a “vacation and leisure travel” ban in Massachusetts until May 4. If that gets extended, all STRs, including hotels, B&Bs and other home-shares, are expected to cancel any nonessential travel unless it’s directly related to covid-19. At least that’s what to governor’s office says.

I went ahead and blocked June since we are not ready to take a chance just yet and I don’t want to be canceling people. We have one booking for a guest with who we have had a relationship for years. We could actually juggle to give him a private space and entrance in case of self quarantine, but he wouldn’t be able to do the visits for which he is booking. If thing improved markedly we can always unblock. It’s better than canceling for our Airbnb status.

Well that’s the best kind of booking to have right now, aside from a reponsible long-termer. A regular guest you’ve had a relationship with for years, would likely be easy about just altering the dates at some time in the future whenever him coming back is feasible.

I’ve had several do that already mainly because their events were canceled. He just really wants to see his son who is a graduating senior even if there is no ceremony.

Well, he and his son will just have to do a virtual celebration, as many many people are doing at this time.

do a virtual celebration, as many many people are doing

Like the Air Force Academy cadets graduating. They had a virtual graduation address this year, and no outside visitors allowed.

Here is a picture of the normal ceremony, close together in the football stadium with a large audience: 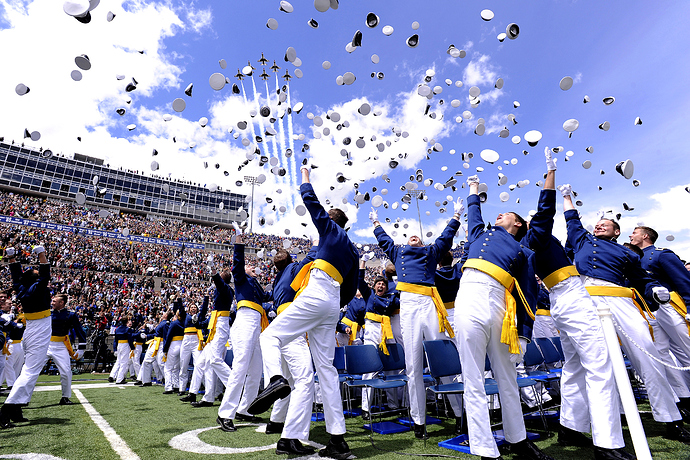 And this year, on the terrazzo grounds, seated far apart from one another and with no audience: 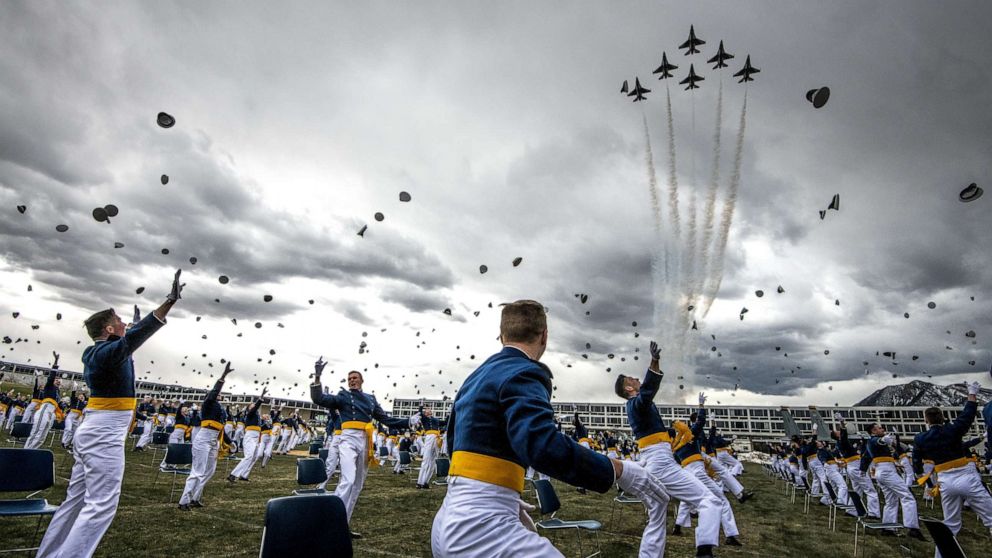