You’re so creative! Love the costume shares!! Should that be a post?

Love the costume shares!! Should that be a post?

A thread? An entire thread of me humble bragging on all my costumes over the years? LOL.

A thread? An entire thread of me humble bragging on all my costumes over the years? LOL.

Why yes, yes it should!! Everyone should humble brag their incredible costumes.

After all, we have the “pet pic tax” on certain posts. Why not a thread with a “costume pic tax?”

As a fellow Zonie, I too appreciate the Dia de los Muertos and look forward to it yearly! If my guests don’t like my decorations, then they aren’t the kind of guests I want to host anyway. My prerogative.

Yup. Nor do they ask for money or pass around a ‘tray’ for donations like many Christian churches do. Tacky IMO!!

Chris the pig is amazing!! We have whimsical decos for Halloween and Christmas, too; nothing religious or slimy, just fun and upbeat stuff!

Thank you everyone for all the feedback! We decided not to let one group of guests take something away from us that makes us happy. The decorations are up! 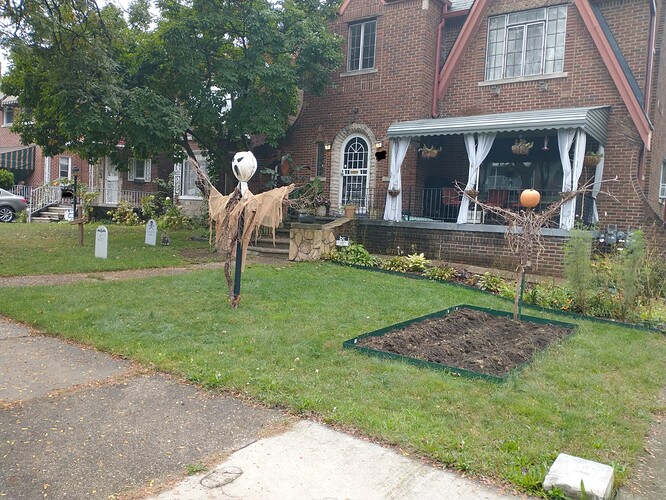 I love your decorations.

Just curious, most hotels decorate for Halloween and other holidays, so where do these guests think they are going to go?

Why is the assumption that they were Christian?

See above where OP discussed pamphlets and saving their souls.

Oh, I didn’t catch that, the second post of OPs. I just knew some guests put their noses where they didn’t belong.

That quote of mine you used was me responding to something very specific that @Annet3176 said about me and so my point was that I didn’t say diddly about Christians, I didn’t even think about Christians, I thought about a family I know that is like that and they aren’t Christians. And, honestly, I resented that she was attempting to call me out for stereotyping Christians: (Sigh. Pretending you know all about someone because you know their faith is just wrong. Christianity goes from liberal & accepting to conservative, fundamentalist. A range of the fundamentalism to some level of liberalism is common in most religions) when I had not mentioned any particular group at all because, to me, these guests were jackasses and you can’t blame that on a religion (and jackasses come in all flavors).

What I said, the thing I was mischaracterized for, was The gall. It could be part of your belief system but they don’t consider that. It’s your house. There has to be a boundary somewhere. And I say plenty of things on here that are fair to call me out on but I don’t want to be mischaracterized.

What I was talking about was the sanctity of someone’s property and that it should be respected. Other people should not butt in about how it is decorated. Those people did not even consider that OP had his own reasons to put up decorations, perhaps they were even sentimental, but it doesn’t even matter, those guests just made it all about themselves.

Sure, they were guests and they’re welcome to ask for more towels but it crosses a line to tell someone to take their decorations down at their own property. And to use religion (any religion) as an excuse to bully someone on their own property (or anywhere) is despicable. One person’s religious beliefs do not trump (do we have another word for this?

) anyone else’s beliefs, religious or otherwise. It is called being a bully, regardless of whether there’s a book you’re quoting while you do it.

I’ve spoken to three people in the last week who have recently lost close relatives/parents/siblings to Covid. I would take down the graveyard at this point.

I’ve lost so many friends and family members that I’ve stopped counting (though I know was at 9 last year) and seeing Halloween cemeteries won’t bother me. I’m just grateful we’re having Halloween.

out of the naysayers. (wishful thinking I know).

As a practicing Catholic, many people judge me (irony alert) for my faith yet know nothing about what I actually believe

Well, as a practicing Catholic, I would assume you believe that Mary was a virgin who gave birth to the son of God, that Jesus died for your sins, and that if you confess your sins and say some hail Marys that those sins will be forgiven by God. Would I be incorrect?

I wouldn’t “judge” you for it, though I’m bamboozled as to how anyone could believe such things, but it doesn’t matter to me what anyone believes, as long as it doesn’t impact others.

As a practicing Catholic, many people… know nothing about what I actually believe

Well, as a practicing Catholic, I would assume you believe…Mary…son of God…sins…

I went to the same place

Catholic beliefs aren’t a secret. I believe they even have a publicist. Plus I got the gist when I read the book. And I’ve been married to enough different Catholics (talk about irony) to know that the beliefs are generally standardized. And I know that they are not budging on this me not getting any wine thing.

Sorry @casailinglady, I imagine you had a different point, but it was too hard not to run with this.

When one of my daughters was about 8 years old, she asked me, “Mom, what’s church like?” I said I wasn’t a good person to ask, because I never went to church, but that my friend Sally went to Catholic church every Sunday, should I call her and see if she would pick you up and take you along with her?

My daughter said yes, went to church, and when she walked back in the house announced, “I’m a Catholic now.”

So the next Saturday, I said, “Tomorrow is Sunday, you know. Shall I call Sally and remind her to pick you up for church?”

“Well, I actually want to go play with Carmen tomorrow.”

“So you’re not Catholic anymore?”

OMG there is an UNCARVED PUMPKIN in front of the house! (gasp! fainting). We didn’t even put it there - that was one of our tenants. And we could not care less if a guest took umbrage over it.

That response is offensive and rude. It was unnecessary to degrade the Christian faith- you are intolerant and disgusting.

Hahahahaha, nice one. Shows how much of a Christian you are, as you were not aware that what is called Halloween nowadays is actually derived from a Pagan festival, it’s got bugger all to do with Christianity!

Halloween may be a secular affair today, dominated by candy, costumes and trick-or-treating, but the holiday is rooted in an annual Celtic pagan festival called Samhain (pronounced “SAH- wane”) that was then appropriated by the early Catholic Church some 1,200 years ago.

So, I’d suggest next time you wish call someone’s post “rude and offensive”, you get your facts straight. The only person being “intolerant and disgusting” around here is you.

I still think it’s tacky, but hey ho, I’m not staying there.

Go away- I have absolutely no desire to read Anything you have to say. I’ve reported you . Try tolerance.

Nope, going nowhere. In fact, I think you owe me an apology, for erroneously labelling my opinion and helpful suggestions as rude and offensive, and a further apology for labelling me personally as intolerant and disgusting.

Personal attacks such as this are against the forums terms of service and as such, maybe I should “report” you… although who to I’ve no idea

Go away- I have absolutely no desire to read Anything you have to say.

As an FYI, no one is required to read anything here.

In any case @JohnF hasn’t violated any of the TOS here, at least not with this post. As someone who is very well versed in American Christianity I have no idea what has set you off about his comment. If anything it seems like you would be agreeing with him. It seems that you directed your reply to the wrong post/forum member.

In any case, please take care when “reporting” people that you’re reporting the right people.