So this time I had a Guest stay with 3 additional adults and a newborn (as well as two dogs, one of which was a puppy). My House Rules clearly require ALL guests to be registered and paid for. I adjusted before check in and Guest accepted. Then afterwards complains in the review that “Charging our newborn as an adult was a little to excessive , but that is the house rules.” And now he is requesting a refund of those fees stating “Per Airbnb infants 0-2yrs old are not to considered Guests”

Any prior experiences to know whether Airbnb will side with Guest or Host in this case? Thanx in advance.

My understanding was not considered guests unless host has own policy. I would fight it and I think it is OUTRAGEOUS that the guest booked & stayed knowing and accepting the charges only to make a planned attack on you afterwards and try to get a refund. I have a policy of never responding to reviews but I would be really tempted here.

Do you have record of communication between you and the guest about the adjustment you made? I agree with Emily that your house rules should prevail, but I’m new host so I’m not sure Airbnb agrees this or not.

I bet Air will side with them!

You’re probably right. The unintended consequence for Airbnb will be that fewer hosts will accept infants.

I would fight based on their own policy:
‘You can also ask questions or clarify the details of your trip with your host by clicking Contact Host before submitting a reservation request. For example, if your host charges an extra guest fee, you may want to check if the fee applies to infants or children travelling with you.’ (From the website)

The guest checked, you charged. Simple. Guest is scamming you.

Oh and it just occurred to me that this request has come well past the Airbnb required 24 or 48 hour period since the end of the reservation…about 2 weeks later, in fact.

The record is in the reservation alteration, so yes there is record.

That’s because they have two weeks from checking out to make a claim. In theory we also have two weeks but guests often check in before then and the policy is 14 days or until your next guest checks in. 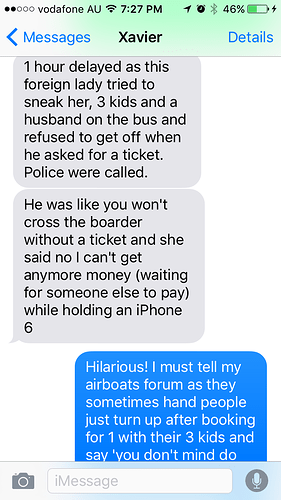 I use those buses all the time they’re a great way to travel Europe on the cheap. (Though often flights are cheaper. I once flew to Poland for £4 one way) Seriously though why didn’t the coach driver do his job and check tickets before letting people on ? Had they not been going to London they would probably never have been caught as it’s only because the UK is not part of Schengen.

But it’s been MORE than 2 weeks as well…

From my perspective they paid the alteration. End of story.

Though I didn’t know Airbnb insisted 0-2 was Free. I don’t accept babies at all so …

According to BNB’s website infants ie under 2’s shouldn’t be charged for.

@Helsi
And in the same link it indicates that the Guest should ask their Host if their extra person charge applies to that infant. In my case it does, is indicated in my House Rules, Guest accepted it when accepting the alteration to include it, and admitted to it in his horrible public review!

I wouldn’t refund them, and let Airbnb do what they are going to do. Furthermore I wouldn’t accept infants for which no charges are allowed. As has been discussed on other threads, those with infants do use more utilities and generate more garbage. If the rental is an apartment or condo that connects to other units they often cry and scream in the middle of the night.

If you want to accept infants but need to remain within the technical bounds of Airbnb rule I would tell people with infants there is an additional fee but call it something else. Airbnb allows you to charge for whatever you want via an alteration (except an infant?) so do that: Rubbish disposal fee. Milk warming fee. Burpee laundry fee.

I know I think it is really confusing.

I don’t really think it is confusing. Airbnb does all that they can to get guests and one of those things Is making it seem that they are guaranteed a free stay for an infant. They expect to put the burden on the hosts to just go with the flow and now in order to get what we require we have to do more work which then kisses us off and he Guest who expects not to have to pay. It’s just one more poor choice on the part of Airbnb as far as Hosts getting the shaft.

Oh I won’t be refunding for sure! And I agree…no free people or pets! (Although I did give a woman a freebie on her declared beta fish.)