I have been hosting for almost 2 years and had finally recovered after getting a 1 star review a year ago due to 1 guest self isolating without informing me, causing the 2nd guest to leave a 1 star when the 1st guest told him he was self isolating unknown to me. Since then we no longer host separate rooms but only the entire unit. I stayed at 4.6 for the following year then after a succession of 5 star reviews finally clicked up to 4.7. Woohoo I thought, I’ll keep this up to get up 4.8 to get superhost. Then bang the very next day a guest left a 3 star and I went right back to 4.6 after only 24 hours of 4.7. Gutted. I contacted her as she had left 5 stars in all categories bar 1 at 4 stars and she said it had been a mistake and could she fix it. I told she would have to contact airbnb to get it deleted or edited as both our reviews had been published (I gave her 5 stars). She said she would contact airbnb but nothing has happened. I was especially gutted as we have instant book on for guests with reviews but guests who have no reviews have to request to book so that I can make a judgement call. (This is after we had a bad experience with a guest with no reviews who trashed the place). She was obviously new to airbnb and doesn’t understand the impact of leaving a 3 star review. Her only comment also was "The beds were uncomfortable " which is now sitting at the top of all my reviews even though the beds and mattresses are brand new and we have never had complaints before and I have slept on them myself and they are fine. Can I do anything or do I just have to ride it out for another year?

No, you can’t do anything about it. Reviews and ratings can’t be changed. All a guest or host can do is request that their own review or response be removed. In that case, I’m not sure if the rating left is also removed.

Did you leave a response to the “uncomfortable bed” review? If not, you should have. “I’m sorry this guest found the bed uncomfortable. The mattresses are new, I have slept on them myself, and we haven’t had any other complaints in that regard, but it’s obviously impossible to please everyone.”

Why are you gutted, I wonder?

Why are you gutted, I wonder?

Yes. I was asking for an explanation not a definition.

Yes I did leave a response to that effect, but I am more concerned about the 3 star rating than the comment

Why was I gutted? Because after putting in heaps of effort for an entire year and a half to recover from a 1 star review, 48 hours after my rating finally moved up a notch it went back down again due to the 1st guest who stayed after my rating went up, giving 3 stars “by mistake”. She said she would contact Airbnb to rectify it but I don’t think she has. 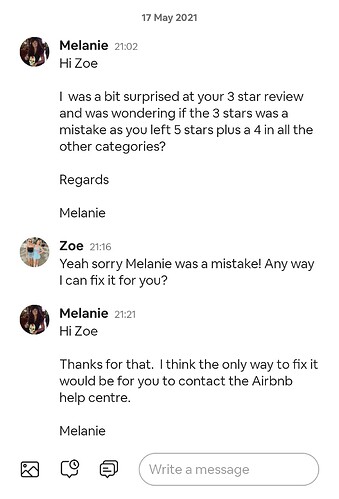 Of course it’s upsetting when guests leave low star ratings, but since you can’t do anything about it, it’s not worth fretting over. There are plenty of hosts with less than 5* ratings, no Superhost status, who have no trouble staying booked.

Airbnb wants hosts to be terrified of bad reviews. You don’t have to play into that.

Truly, reviews aren’t the be all and end all. (I know I bang on about this a lot but it’s true.) Airbnb has created an environment that scares hosts into thinking that they must have five star reviews across the board all the time.

Many hosts are falling for it which is a shame.

I understand your disappointment. I like to do a good job and have the reviews and, yes, the stars reflect that! It’s just more gratifying and more fun - even if, as some of our more experienced hosts say, Superhost status is meaningless.

That being said, I, too, had a guest drop a star by mistake. We both tried in vain to have it changed. Won’t happen.

Take a little holiday with some AirBnb money?

The whole review system on Airbnb is a mess and badly needs updating. It’s really inefficient and not really useful. The system for reviewing guests, with the few checkboxes presented, is basically useless. Most hosts just give guests very nice reviews out of kindness, giving them the benefit of doubt (unless there is a real problem), but often regretting it latter. We’ve had so many guests that get great reviews from hosts but then we check out the guests and realize that the reviews don’t really reflect reality. Most hosts really need the income so they take whatever bookings they can get, especially at a time like this.

The basic problem with the review process is that Airbnb takes no position on whether anything stated is factual or not. Reviewers can simply just lie about what they say in a review and there is no recourse. Reviews used to be more trustworthy and honest but no that’s not the case. What good is a review system if it has a low level of trust.

We recently had a guest stay with us. When they first checked in they were complaining about all kinds of things, but little had to do with us. one big complaint was how expensive everything on our Caribbean island was. Another thing was that they were mad about what the taxi cost was as they travelled from a resort to get to our staffed villa. Another complaint they had was that they would have to get Covid tested to fly back to the US. None of this was our doing but of course when the guest left us a review, they wanted to punish us for their “Covid era” frustration and they gave us three stars. We’ve never had a review like this as we always get 5 stars. So it sucks and Airbnb could care less.

Here is what was really troubling about this review and why I think Airbnb needs to be more proactive and update their system and procedures. When this guest complained and started abusing our staff because of their frustrations, I knew that they were going to be a problem. Simething just like this came up in the past and I contacted Airbnb as a Superhost and they did nothing. With this situation I took the approach of not reviewing the abusive guest (why provoke them). I figured they would just settle down and go away. Well, at the very last minute I received a notification from Airbnb that the guest had given us a review. As soon as I got the note I immediately clicked on the button to review the guest. But guess what? The system had timed out and now it was too late to leave a review. The guest had rigged the system and the timing to get in this review. Who would do something like that?

I tried to bring up this matter to Airbnb management and they just ignored me and pointed me to an article about their so called review policy. They don’t care that people are gaming their system but I do. They don’t care that guests leave reviews like this that gave little basis in facts or reality. So, be careful out there.

The guest had rigged the system and the timing to get in this review. Who would do something like that?

Actually hosts do this all the time if they think the guest might leave a bad review. Leave it to the 11th hour if the guest hasn’t left a review yet.

Not reviewing is unfair to other hosts who will be saddled with these bad guests, because you have failed to warn them.

It wasn’t by mistake, it was deliberate. I would have written a “this guest is a whiner, will not rent again” review and waited until about 2 mins before the review deadline to post it. I’ve only done it once, and I doubt if the guest noticed since she was oblivious to most of the real world. But I’ve been lucky with guests and have only written 4 or 5 negative reviews in 2 yrs of hosting.

I had a similar experience with a guest that came in April. She complained of all the rainy days, traffic, etc. I guess she forgot about that old saying “April showers bring May flowers.”

I did write a review for her assuming that she would give me a bad review due to weather. I simply stated that they were good guests but unfortunately since it was April, she had rainy days for the entire week.

I lucked out and she gave me a nice review but also mentioned all the rain.