Guest has damaged doona cover, offered to pay, what do I charge?

So just had a guest message me “Hi. I accidentally dropped something hot on the bed sheet and it left a mark. Happy to pay for the damages. Just let me know.” 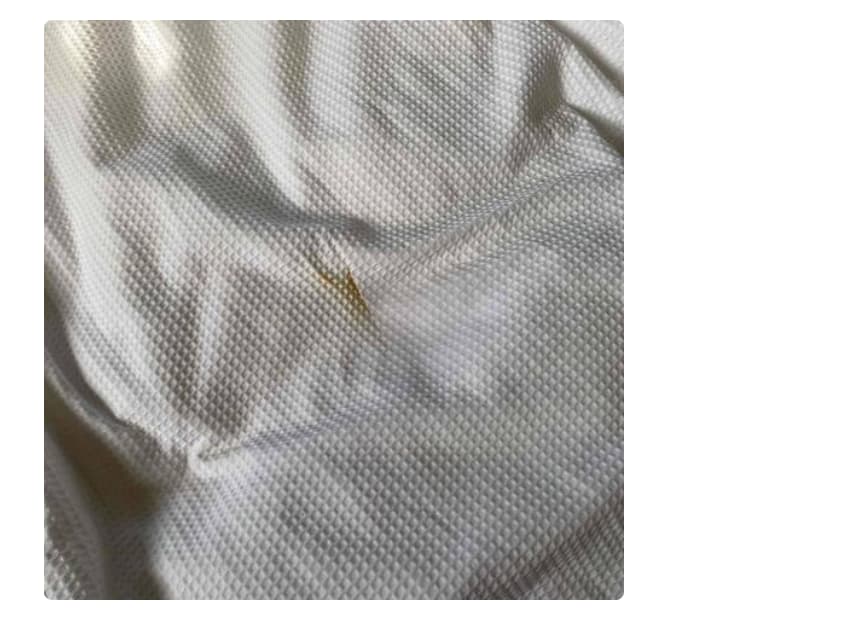 The doona cover is actually very new, like 3 weeks old, and only used for 3 guests so far. It’s pristine with no other stains or reasons to write it off. And it’s a Super King doona cover, of course I bought it on sale so from memory it was $150. Regular price is $320 and the website of the store where i bought it says I can buy it at member’s special today for $192.

How to proceed?
Of course the agreeable version of me is like, oh well these things happen and he’s owned up and offered to pay so that’s wonderful of him. But then the other side of me remembers other guests who do damage to linens and say nothing, and even deny it.

I’m thinking of offering this: You can pay the full replacement cost and keep the damaged quilt cover, or pay half, $100. I would like to avoid abb CS if I can.

You can pay the full replacement cost and keep the damaged quilt cover, or pay half, $100

I like that solution, minus the paying half bit. I mean, it’s new and you can’t really use it in your Airbnb if he doesn’t replace it so you would really be out of pocket.

But I guess what you’re saying is he might choke when he finds out how expensive a good doona cover is, so you want the option of letting him pay less specifically so that you can avoid turning it into a dispute that has to be mediated by ABB?

I’m thinking he can pay half because I’ll just put it into my personal use. And it’s not super expensive, it’s from Spotlight…

that’s all we have up here (Kmart and Harvey Norman as well, the former is poor quality for linens and the latter just charges too much for average quality IMHO) imagine if it were from Sheridan…! (granted, i would have bought it on sale at the Outlet! regardless, I never pay full price for anything). We have 2 spare SK doona covers anyway, so I don’t have to rush out and buy a new one tmrw, so I potentially can wait to get a replacement at the price that suits me.

and yes, I’m mitigating him refusing to pay at all, which he could easily do if we got the CS team involved.

I like your idea. Since it will become yours, maybe you can dye it. I bought a dye on Amazon and did it right in the washer. If you die it a darker color, maybe purple, you won’t see the brown spot.

oh I also thought of that! I’ve never actually tried to dye anything but it could be worth a try for my own personal use. Will check out amazon. thanks.

I would sew a tasteful design over it, charge him whatever that effort is worth and keep using it. Letting him pay for and keep it is also a creative and valid solution.

I think your solution is a good one. To some extent this kind of thing is “cost of doing business.” It stinks more when it’s a new item but that’s just the guest’s bad luck.

I would sew a tasteful design over it,

That’s exactly what I do with very slightly damaged linens.

I’ve done it a couple of times but with dark dye colors.

Great idea! I have to keep that in mind for next time. It would be a lot easier that dyeing it.

I’ve never had much luck trying to dye something. Plus if there is a stain it often is still visible. And the dye, if not well set, can bleed in the wash, staining other things washed with it.

Also a burn mark usually makes the fabric brittle where the mark is, so you are better off sewing a cool little patch over it, or embroidering over it.

I’ve never had much luck trying to dye something. Plus if there is a stain it often is still visible. And the dye, if not well set, can bleed in the wash, staining other things washed with it.

Yes I agree – @gillian, think twice before dying. You can dye things beautifully at home but it can take a lot of work to get the colour to spread evenly through the fabric and this is even more difficult with large pieces where wrinkles in the fabric during the dying process can affect the end result. (That can be quite pretty if you accept the flaws of the dying process have aesthetic value!). But many kinds of home dye processes continue to bleed and rub off for many washes afterward (and the colours correspondingly fade). And not just in the wash: if you were to make a bed with a dyed doona cover, the dye might rub off onto the sheet below it, ruining yet more bedding. If you want to try the dye option, do some research and choose the most colour-fast dye, follow all the instructions for setting the colour, only ever wash with other darks, and test it out by first making the bed with old sheets where you don’t mind if they get stained.

yep, it is brittle. I’m guessing it’s a hair straightener burn. Can’t think what else it could be.

and there’s a reason I’ve never dyed anything, for all the reasons @lisanddavid listed.

I would sew a tasteful design over it

I like this idea but not sure what is ‘tasteful’ in the context of crisp white doona cover.

either way, the RESULT was: he left me $100 cash for it. We’ll see how the review pans out but I’m satisfied with that, and there’s no other mess in the suite.

I would do white grub roses as a spray and balance it up with another on the other side!

I like this idea but not sure what is ‘tasteful’ in the context of crisp white doona cover.

Crisp white fabric patch. You can cut it in the shape of something that might reflect your listing. For instance, living in the tropics, I’ve cut patches in the shape of palm trees, or geckos. Use a tight zigzag stitch to sew all around it, or if you sew it by hand, a tight blanket stitch.

Ha, so true. I was just this morning contemplating the excess number of faintly stained bedding that I have accumulated at home.

@debthecat and @muddy have good ideas! I don’t know if you have a logo for Piney Ridge, but you might consider creating one that has the name plus maybe a silhouette of a tree or something iconic to the estate, and then there are companies that will make custom embroidered patches. You could have several made up (just googling I found this one but no endorsement is implied since I haven’t tried them; there are many such companies online: Embroidered Patches Australia | Custom Embroidered Patches Australia). And then you would have backup patches you could stitch over stains and they would look like a deliberate customisation of your bedding!

I’m thinking I’d like to do this for myself but I have to first think of a logo that represents sea glass which is hard to graphically represent given that it’s all about its translucence and how it shifts under the light. Maybe I should just have a shell or a multicoloured fan coral or something that evokes the sea (but not the fishy smelling aspects of the ocean, LOL).

The problem with embroidered patches is that they will be fairly thick and stiff. So they might be okay for patches on say, an arm of a sofa someone has gotten an irremovable stain on, but for a duvet, I would stick with something that is light and flexible.

As someone with both a bachelors and masters degree in textiles I would say to avoid dyeing it. After all my years learning about and using dyes I still am hesitant to dye large continuous pieces of cloth. I prefer to stitch it patch over stains or small tears.

I do have a logo but the placement of the patch over the stain won’t make sense.

I’m going to just put it into my personal use, it’s not that bad. For me.

for a guest… mon dieu! we demand one night’s refund for seeing a faint stain on the outside of the doona.

Update: I went to my local machester/homewares place and I got a SK doona cover for $95 (on sale of course). Not quite the same level of quality as the damaged one, but if this one is only going to get 3 uses I’m not keen on buying anything too pricey if the look is the same.