FYI - AIR POLICY that affects some with SMART LOCKs

I recall a recent topic where “the guest had to install an app to use the smart lock”. Apparently, this is not permitted. So FYI.
. 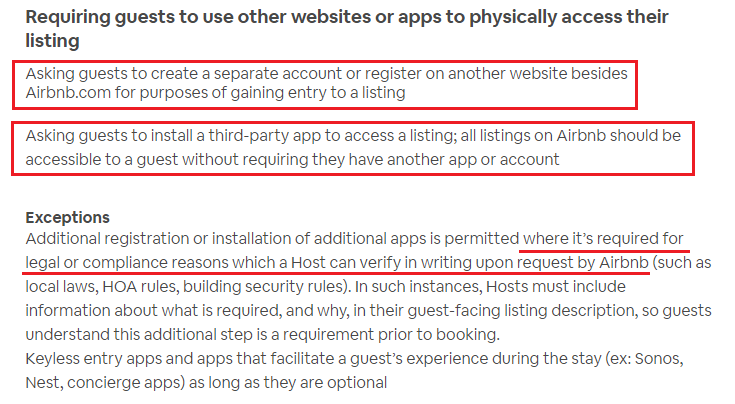 I guess my “building security rules” will have to be drawn up if asked by AirBnB. Thanx for the heads up. I do not recall seeing this. Where and how did you come across it?

AirBnB has no problem linking to my August Smart Lock app. I do bot allow this after one screw up on the part of the guest though.

I happened across it while researching something else.

I clicked the link and read it fully. Apparently hosts aren’t allowed to settle anything outside if AirBnB for additional funds either…

My highest question would be when this policy was implemented.

Yeah I noticed that too. In theory a Guest who books on Air can’t become Direct at any future time. Kinda hard for Air to dictate or enforce it, especially if the Guest wants that.

They are seriously overstepping. What incredible arrogance.

They think they own the relationship between a host and guest forever?

You can’t suggest to a guest in residence that you exchange email addresses before they leave? What about the several guests I became friends with and keep in touch with from time to time? Airbnb thinks they can control who and how I choose to personally keep in touch with, just because they originally met me through Airbnb?

I don’t know how long they’ve had that wording, but they can shove their busybody control-freakness right up their corporate behind.

Wow, there’s a lot there. Thanks for sharing. I can’t say I was aware of even half of this.

I see where, in addition to being overreaching, this makes a host vulnerable. Something goes sideways on an off platform deal and the guest can go back to Air and flag your listing or you. I was just noting the guest-centric nature of the flagging questions.

I’ll admit I took a payment for an extra service off platform and then refunded it after something went sideways and the res was cancelled. At that moment I did think to myself that I wouldn’t do that again.

Although I’d refunded them immediately, they didn’t see it and demanded the funds back ASAP via Air msg (vs via text where they’d insisted I take cash or Venmo instead of making a RS request; still don’t understand why except they we pushing hard to leave cash on the counter upon checkout. As if!)

As soon as I saw that Air msg I knew they were using it as a “threat” if I didn’t refund them (another reason I’m glad they didn’t stay with me after all!)

My recollection is around a year ago. This has been there to be ignored for a while now. If they can find a topic for a “policy” then they will.

I have it in my house rules that they can! And many do!

Considering that none of us knew about this, it’s buried on purpose. Otherwise it would actually be in the Terms of Service, not in an obscure help article.

Just imagine the widespread backlash from hosts and guests if word got around?

Did you know that you are officially Air’s bitch now? LOL.

there’s an exception : Keyless Entry Apps are still a go.

Oh you mean the thing I quoted in full and outlined in red?

.
Actually, they are explicitly verboten. If a host wants to walk that line and “claim exception”, they would be well-advised to get that exception noted in writing on their account - and ASAP. Long before any potential guest might complain.
.
Otherwise, a host may find themselves suspended or banned, pending investigation with all future bookings removed. That may happen anyway, even with such notes in their account. After all, Air’s “go to” is Suspend First, ASK Later.
.
Personally, we would never want a smartlock that requires the guest to install and use a separate app. There are plenty of models that simply assign a code for each guest.

I just meant that they explicitly state that mobile lock apps aren’t included in what is prohibited and even mention some of them by name. We started with the August lock ( we didn’t have the keypad addition at first) so guests did have to install the app. But we offered a lock box in case of emergencies or if someone didn’t want it. We ultimately added the August keypad for simplicity - but my only point was Airbnb clearly states that such apps are allowed - to the point that Airbnb even named some of them. I mean these apps even work integrated into your Airbnb account - and provide access automatically.

On another note - as far as additional registration - my property is one of those. Where we need to gather everyone’s information to allow them access to the community to get to the property.

Please look again. Perhaps you are interpreting it to suit your desires, not what what the policy actually reads. Anything that “requires a guest to install or use a 3rd party app” is explicitly prohibited. They state clearly that “keyless entry” MUST BE OPTIONAL.
. 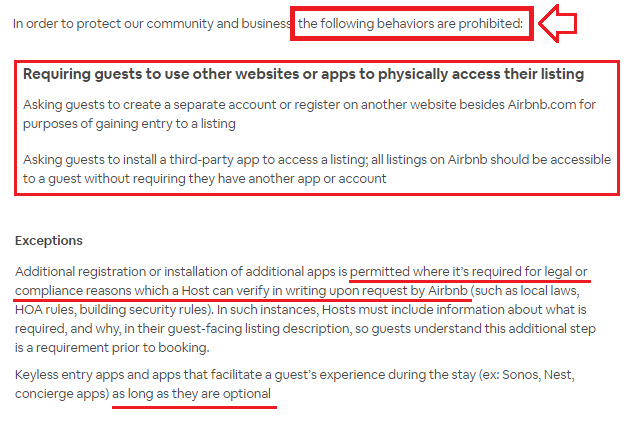 .
Yeah we get it - you love your smart lock. Perhaps your property “requires XYZ”, and maybe qualifies for the exception.
.
Ok fine - but never forget that Air can be INCREDIBLY CAPRICIOUS when a guest calls or writes in to complain. So, cover your rear. I’m not talking about “what is in your listing” - I’m talking about having Air Agents NOTE YOUR ACCOUNT - so that it is on official record that you have the exception in place and they have reviewed and put in writing to you in a message and/or email that this is the case.
.
Don’t put yourself in a position where you may have to prove after the fact that you were entitled to an exception. Get it up front, in writing. Get it written in your account and a message and email to you. When guests make certain accusations, Air almost always “suspends first” and maybe reviews later.

I can’t say I was aware of even half of this.

Here’s a link to the Airbnb TOS and policies:

This is the starting point. There are links within links. It’s byzantine but not devious. It’s not that Airbnb is trying to hide the policies or bury them on purpose. Like a host who thinks they need a rule or paragraph in their listing copy to cover every problem they’ve ever had, they just keep making more and more policies. Georgygirl is exactly right.

The hand wringing about it seems a bit over the top to me. The point, as always, is to protect the guest. It’s not hard to imagine how many times guests contact Airbnb to complain about a host trying to get them to book off platform, sometimes in advance of any booking. Hosts aren’t just using Airbnb to find guests and then earning that guest’s trust and business for the future, they are preventing Airbnb from getting any payment on some guests at all. But when things go bad and they have a fake listing or a rogue host, then the guest calls Airbnb for help. I don’t blame Airbnb one bit for trying to stop this.

The most likely way a guest is going to call Airbnb to complain about a host trying to book them off platform is if there is a problem with that host. If an Airbnb host seemed to be trying to get me to book off platform before I’d ever stayed with them I’d report them as well.

Obviously they know that many hosts list in multiple platforms and have their own websites. They know they can’t control which platform a guest uses. They can’t stop guests from looking for a host’s webpage.

I’m sorry - I know Airbnb can be off the wall sometimes - and I’m still newer to the platform - but they literally promote what is being warned against here on this post : e.g. https://www.airbnb.com/resources/hosting-homes/a/the-dos-and-donts-of-providing-self-check-in-238

It’s just me and I’m not an authority on anything - but I’m not buying that you aren’t allowed to use Smart Locks… they just promote it too hard and allow it to be so easily integrated to Airbnb for me to believe it isn’t allowed / desirable.

I had the app - but found that user error was a bit of a wild card. Now we just added the keypad - and can offer guests both if they want - code + they can use the app if they want. 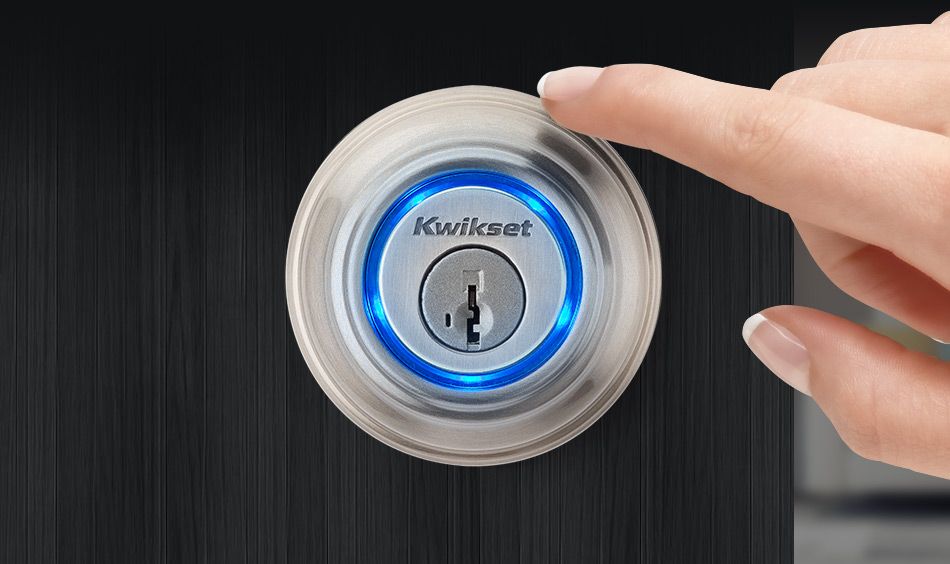 Kwikset Kevo 2nd Gen touch-to-open smart lock is here. Experience the convenience of using your smartphone as a key.

I think the “key”

phrase is the word optional.

Batteries die whether it is the phone or the lock. People forget their phone. Some people don’t have smart phones.

I have a smart lock they can use for first entry OR a keybox. The keybox is a fumble-fest & electronic entry much easier BUT we should always have a plan B.

Plan B is keybox.
Plan C is there is a key in the storage room of my LTR condo so I can ask them for help.
Plan D is a friend close by with keys.

I ask guests to use the keys hanging in the unit instead of the smart lock after check-in so preserve the battery BUT their entry code stays active during their stay.

I can hear it now “keys aren’t safe, someone can copy the key”. My condo is first floor. If someone really wants in, just throw a rock through the window. I encourage guests to lock the storm door while they are in the condo, the key won’t open it.

The August lock is actually exactly just like that - app only to open the door. You can open the deadbolt to the door using your phone - and no code. If you choose that setup. Or you can pay more and use a code configuration with a keypad. But Airbnb allows both modes.