Do any of you who host a room in your house have a tried and true way of getting the guests to either not leave food in the guest room or close the door? When we are giving the house tour we always tell the guests that if they leave food in their room and the door open the dogs will steal it. We also state this in our house guide (which nobody reads). Once I heard our dog in the guest room licking maniacally. I asked the guest if he had food. He said no. It turned out that he had a jar of peanut butter that he hadn’t closed properly which one of our dogs turned upside down and was eating. This morning as I was telling a guest stories of our dogs swiping food from guests one of our dogs was eating a cake she’d left on the floor. We’re considering an automatic door closer for the guest room, but this might make them feel isolated.

Do you have a ‘no food’ in the room policy??

No, I don’t. Many of the guests really seem to like to eat in the guest room. Also, wherever the guests eat, if they leave food within the dogs reach the dogs will steal it. Most of the time when the dogs steal the guests’ food, the guests have forgotten that they have food or perceive it as being well sealed so it “doesn’t count”.

Maybe start a no food in room policy? I could see the dog stealing causing issues for some guests, and it may not be worth it, you know?

Well then short of ‘no food’ or and auto door closer, I’m out of suggestions.

What is it with people and (not) closing doors? Like my granny used to say… ‘were you born in a barn?’

Do you have it in your house rules? Although we all know how they never get read. Do you mention it during your initial tour? ‘It’s really important you keep your door closed at all times so the dogs get in’. Maybe if you make it sound like the dogs could chew up their stuff rather than eat their food, they’d care a bit more?

We’re considering an automatic door closer for the guest room, but this might make them feel isolated.

My guest room has one. As far as I can tell, everyone is perfectly fine with it. And it’s kind of a necessity for a stand-alone A/C room. I don’t know your layout, but I think it makes perfect sense to get one. But those things don’t last forever - mine has been in use for less than a year, and is already showing its age. It doesn’t have quite the same zip it did when it was new; it’s clearly feeling its months.

Yes, when we are giving the initial tour we always emphasize that if food is left on the floor or the table, the dogs will get it. It’s not in the house rules. Of our three house rules two are broken constantly. Adding to the house rules seems like an exercise in futility. We show them a shelf in the refrigerator that we’ve left empty for them and offer them counter space. We tell that if they need to store it in the guest room they need to either close the guest room door or put the food in the closet and close the closet door. As I’ve said, guests seem to forget that they have food or think it’s so well sealed that it doesn’t count. Today’s guest told me repeatedly that she had planned to throw away the vegan tiramisu that our dog stole.

I’m not joking - but when you were telling your story I got the image of your dog with his snout deep in the peanut butter jar (yum).

Maybe a funny picture in a frame with the warning by the door “CLOSE THAT DOOR OR LOOSE YOUR PEANUT BUTTER!” 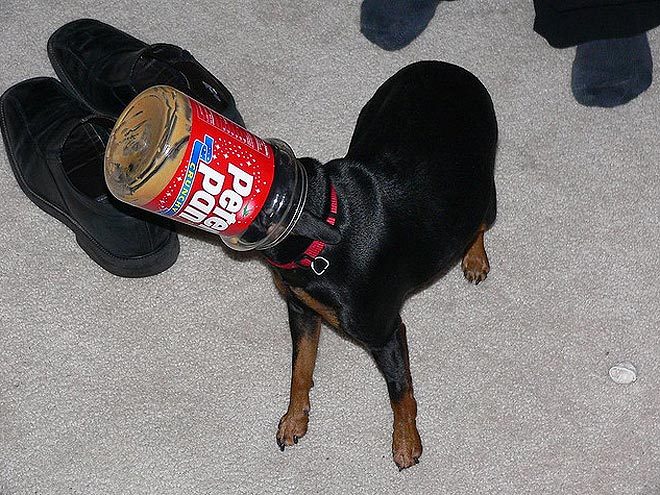 Thought that would be the case! So what if you say the reason you don’t want the dogs going in is because they like stealing socks and underwear, lounging on the bed, peeing on suitcases (ok maybe that one is going a bit far), but you know, all things that might have more impact to the guests themselves?

I wish that would work. My dogs are well behaved except for food stealing for which, in my view, you can’t blame them. I get tempted by tempting smells and their sense of smell is over 1,000 times better than mine. The guests would figure out pretty quickly that they don’t chew and they are house trained. Many of our guests want the dogs to lounge on the bed with them. The one that doesn’t have arthritis complies.

Out of suggestions then. Looks like a self closing door would do the trick!

Thanks. It looks like I’m going to have to install a self closing door. I’m pretty sure that I’ll be back here complaining that guests prop the door open.

Thank you for the compliments for my dogs. I think they’re awesome, but I’m unabashedly biased.

@EllenN This is quite a problem. Generally, I would offer a solution, but you have already offered your guests FOUR solutions and they are still ignoring the requests.

My good friends on the Cape have a labradoodle that can, and will, find food anywhere. He also, if he likes you, will carry your shoes in his mouth while proudly prancing around the house. My friend has a house rule– bedroom doors always closed and no food in the rooms, especially chocolate. If the only victim is a shoe, not a big deal. If there is a food that is poisonous for the dog that guest is required to administer the ipinec [or what ever that stuff is called], take the dog to a remote area and help it empty the contents of his stomach and is never invited back.

But, she has friends and family. You have paying guests. The difference is huge.

I wonder if there is a way to have the dogs sniff the bags to tell you if there is food before the bag goes to the room? I suppose some of your guests who aren’t that comfortable with animals would be horrified however. A self closing door might be less troublesome, though can be annoying when you are trying to move items in and out of the room.

Wish I had some better thoughts, but my first one, provide a safe place in the room, you have already covered.

The thought of trying to keep food away from a Labradoodle makes me laugh. The food obsession of a Labrador and the intelligence of a Poodle in one dog. That’s something to ponder.

Automatic door closers have a sliding stopper which should work when the guests are bringing in their luggage. I’m worried that they will feel isolated. We encourage guests to use the entire house and to socialize with us if they wish, but our dog’s health and safety is of primary importantance. We have tried asking guests if they have any food, but they tend to forget or for whatever reason believe that the food they have doesn’t count. I think that people who don’t live with dogs don’t understand that their sense of smell is so good that they can smell tumors, changes in blood sugar, bombs, etc. so it’s no challenge for them to find food. Add to that the fact that most dogs don’t ever feel full like we do when we’ve eaten enough. Also, people who don’t live with animals aren’t used to closing doors after themselves. I’ve always had pets so I’ve never in my life left a front door open even to get the paper or the mail. Many of our guests leave ours open while they go back and forth with their luggage. When I open a front door I block it with my body due to my lifelong pet ownership.

My dog is a massive food hound, too. We bought her a toy that she was meant to nudge across the lawn to get food from. She figured out she could just unscrew the toy and she could get the food. They’re clever little things. She can smell food from across the dog park, etc.

If it were my puppydog, I’d stress the guests the rules and what makes a dog sick (e.g. chocolate, onions, etc.), and share the story of the peanut butter when you tour the house. I would also consider putting up a kiddy gate (if possible) to keep your dogs out.

Your dog is wicked smart. The mental image of her outsmarting the food toy made me smile.

This morning I was sharing the story of the peanut butter along with the story of how the same dog stole a banana from a guest and ate it skin and all. Our dog was simultaneously swiping the guest’s food. Shockingly, this even happened with a family friend who’s work is wildlife rescue and rehabilitation. We warned her repeatedly about one of our dogs propensity for stealing food. He got a Baby Ruth candy bar and a blondie from her bags. She said that she didn’t remember that she had food in that particular bag.

share the story of the peanut butter when you tour the house.

This is a great idea. Make your (short) stories about your dogs stealing food in a comical way to tell guests during the house tour. Without belittling them, make your previous guests sound lovely but clueless. Guests on house tours like anecdotes.