Does anybody NOT supply tea or coffee options

I do rooms only with private bathroom, with a coffee machine and a kettle/cups/tea bags. Guests arrive, i show them to their rooms, and fetch them a fresh pint of milk from the fridge, plus a bottle of water each. There’s no kitchen, but I have negotiated 20% discount at the restaurant 3 doors away. Nice and comprehensive, I would have thought.
But a couple of guests have mentioned disappointment at a lack of a fridge, which is fair. The recent guests were here for one night, during a cold spell, I’m sure that milk would not have gone off. problem is, I don’t want to get a fridge. It would be crammed in somewhere, and take away some of the ‘charm’. Easy option would be to provide those little cream/milk pods. I do think of the pods as ‘cheap cafe’. Or say knackers to them, and remove the kettle!
If I provide a fridge, they’d want to fill it, then they’d want a toaster, some crockery and cutlery…

So: we’re city centre, could I get away with no refreshments?

Personally, I’d want a fridge - just big enough for milk and some juice for the morning (or during the night!). What about this: 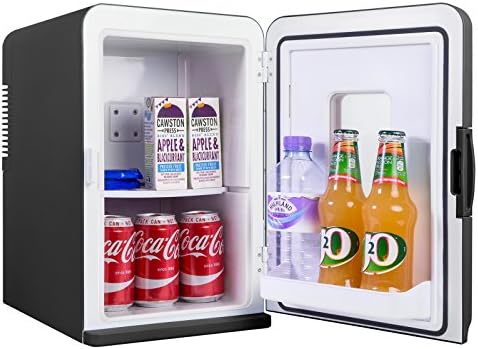 So: we’re city centre, could I get away with no refreshments?

I have one cup puck style coffee makers and they never get used. It just ends up being old, stale bad coffee. I leave the coffee makers there just as a token gesture but they are a bit of work to clean out. I think the K-cup coffee makers would probably be a lot easier for me and guests actually.

For the fridges, I put mine in the closet and run a cord or tap off the closet light using a light socket plug adapter. The little mini fridges use hardly any power and don’t need a lot of air so they work fine in a closet. I just put a power strip on top so that I can turn the power on/off. There’s also a microwave in there too on top of the fridge.

Without use of the kitchen a mini fridge is necessary, you could put it in the wardrobe or one in the hallway that could be shared by both rooms, but milk sitting out over night…yuk.
Personally when I travel I like to get up and relax with a cup of something hot or cold, I’m not a fan of jumping out of bed to go find a cafe’.

@Barns I understand your concern about the refrigerator being “one more thing”. Just something to think about…some medications require refrigeration. A mini-refrigerator would help with that situation too. Usually those types of medications are very expensive and I can understand if a guest would be more comfortable having those in their private space.

Know what you mean about the tacky milk pods, I put milk ‘sticks’ in my rooms. They’re the same price as the pots from Amazon and take up less space too.

We just put coffee and tea in the living room and guests can store something in our fridge. Personally I don’t like fridges in rooms because of the humming sound they often produce.

I don’t know if it would be possible and/or desirable for you, but maybe you can do a coffee / tea corner with small fridge in a comunal space (e.a. hall way) ?

Definitely keep the coffee/tea and use the milk pods if you have to. I know when I go to a hotel, I typically use the refrigerator to store cold drinks.

I can also relate to wanting a refrigerator for medicine, as my father-in-law is diabetic. We bought a water cooler with a built-in fridge and put it in the hallway outside of his room, just so he could keep it close at-hand.

I have tried thermoelectric mini refrigerators and my conclusion is that they didn’t cool well or last very long, plus they have fans that can be annoying. They might work better in a cooler climate, though.

thanks for all the replies. I think I’ll get the one-serve pods, as most of my guests stay one or two nights - should they turn up with medicine I can certainly stash it in my own fridge. Big old carbon footprint to have fridge running all week on it’s own up stairs! Perhaps if I come across one, I’ll snap it up, until then take the guests suggestions on the chin. I still get 5stars from them , but a couple have suggested a fridge.

I would NEVER stay at a place without some sort of a fridge. Get a small one and make your guests happy. The little ones do not use much electricity.

I am in the need a fridge in the room camp. I hate it when I get into a hotel room and discover no fridge. That and coffee, must have coffee…

The little ones do not use much electricity.

Agree, you may be be surprised at how little electricity they use if the door stays closed.

I’m sure I can fit one somewhere

I have 5 rooms and 6 fridges total. Its still not enough sometimes. The little mini fridges are rated to use like 120 watts but in reality thats peak draw but steady is closer to 60 watts. They don’t even run that often either. The big fridge is over a kilowatt but its over 10x the internal volume so I could have like 10 of these mini fridges and they wouldn’t use as much power as a big fridge.

Then there’s the wine coolers. Lots of cold beverages keep people happy. Thats why hotels have an ice maker on every floor plus a mini fridge in every room. People want to have adult beverages and I’d say thats one of the number 1 most used amenities.

When I was student in the UK circa 1990 we’d leave the milk out on the window sill of the kitchen overnight. With global warming and Brexit I am not sure that is still feasible though. I’ve heard reports of temperatures soaring into the low 20s in February. On the plus side they have cafes which serve quite good coffee whereas back in the day there was only Bar Italia in Soho.

Also I provide UHT milk in school snack sized tetra packs like you get OJ in. They can use for T&C or pour on their cereal I also provide. I leave it in the fridge but they can sit of a shelf for ever. No one has ever suggested I provide fresh milk instead. The taste is the same, not the off slightly burnt taste UHT milk had in the 1980s. Around the Mediterranean that seems to be all supermarches sell anyway so a lot of people are used to already.

With global warming and Brexit I am not sure that is still feasible though. I’ve heard reports of temperatures soaring into the low 20s in February.

Brexit has become like Ground Hog Day over here, but I can’t stretch it’s effect to Climate Change!

Yes, we had terrifyingly high temperatures for February last week, although few people seemed concerned; they just enjoyed the contrast to last year’s Beast from the East. Early swallows have arrived and we have a blackbird nesting in the hedge just outside the bedroom. Terrifying.

Yeah I’d bite the bullet and get a little fridge. But be prepared for people to turn them off and complain about the noise sigh

I actually had to buy hotel style cupboards off eBay to put the fridges in but I haven’t had any complaints and they rarely turn them off now.

If you need to put medication in the fridge you should check there is a fridge.

I understand your concern about the refrigerator being “one more thing”. Just something to think about…some medications require refrigeration. A mini-refrigerator would help with that situation too. Usually those types of medications are very expensive and I can understand if a guest would be more comfortable having those in their private space.

I’ve also had a few guests use the fridge to store breastmilk/formula.