Corona virus19 in the USA

I have been reading today about CV19 spreading even more so in the USA.
Please please PLEASE take absolute care everyone!!
I’m afraid for you.
Listen to the people who really know what to do, not the ones who think they know or have an alternate agenda.

CV19 spreading even more so in the USA.

Such great leadership / So much winning! 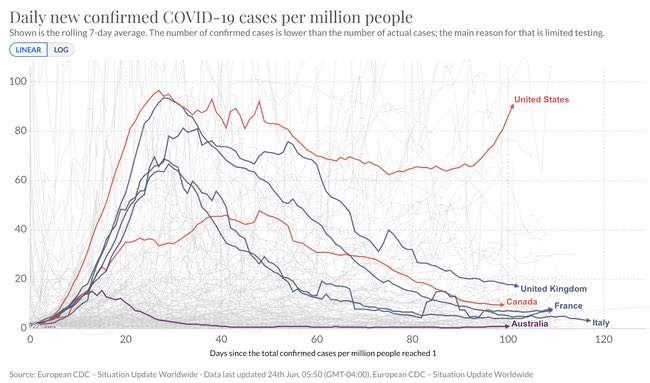 And no surprise which states have the skyrocketing rates of infection. Repub. governors who were so anxious to open everything back up, with high populations of Trump supporters who refuse to wear masks or distance. The ignorance is unbelievable.
Yes, stay safe all you US dwellers. Mexico here’s not doing much better.

Freedom to choose can come at a very steep price - sometimes costing your loved ones health / life- even one’s own. Is it worth the effort of not social Distancing, washing hands and all the rest?

The figures in the U.S. we’re seeing reported here make sobering reading. It’s unlikely the EU countries will allow free travel from the US this summer, and quite rightly so.

We’re dealing with several outbreaks in Spain again, not at levels you could call a second wave but sufficient for several areas to revert back to de-escalation Phase 2.

In Andalucia the outbreaks have been identified as coming from workers hostels, and the appropriate steps taken to test and quarantine those folks involved.

In total, Spain registered 219 new cases yesterday, the highest figure for three weeks. Three of those were from here in Jerez, where we also had one death.

I think folks are getting a bit casual, they think it’s all over when in fact it is merely controlled.

Yesterday was the feast of St John (la fiesta de San Juan), and on that basis I got a free beer in my bar, but there were no major celebrations as there would normally have been. However, some communities just didn’t get the message.

This is yesterday in Cuitadella, a major city on the island of Menorca: 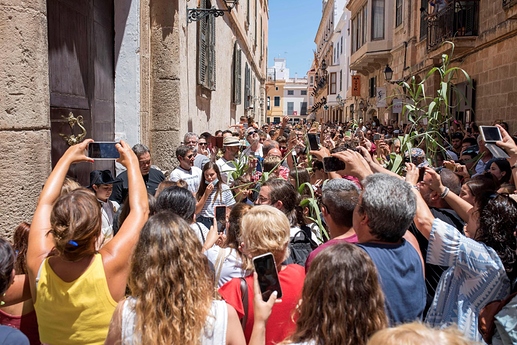 No idea who to attribute it to, it’s appearing in the press all over Spain.

As far as Menorca is concerned, they’ve just started allowing tourist back from most European countries so god know where all these folks are from. The local council specifically banned any celebrations… so that worked well

Here’s a story from covid Texas I saw today. One selfish idiot who thought his cough was just from his construction job has infected 18 folks in his family. Though they say they social distanced, the picture shows they obviously did not. And the grandma who just dropped something off? I’m guessing she came in maskless, greeted others with hugs and kisses, stayed 30 minutes and returned to her car without sanitizing anything.

It’s depressing. I’m sticking with my estimates of 650,000 US deaths due to the pandemic before it’s over.

And no surprise which states have the skyrocketing rates of infection

More analysis on that topic.

The end result, according to one of the studies, is that infection and mortality rates are higher in places where one pundit who initially downplayed the severity of the pandemic — Fox News’ Sean Hannity — reaches the largest audiences.

Word of the day: filicide

"Greater exposure to Hannity relative to Tucker Carlson Tonight increased the number of total cases and deaths in the initial stages of the coronavirus pandemic," researchers say.

In our state, there is an order to wear masks and it is required to wear one in any inside space. There are lots of posts and articles, etc from our state and local government about wearing masks. Some of the information is quite aggressive: “keep yourself and others from getting sick”, “masks save lives” and “we can only beat covid if everyone wears a mask”. That kind of stuf. It’s not wrong. I believe them. Sounds responsible doesn’t it?

My favorite is “wear a mask to protect others”.

So, they’ve also recently opened up indoor dining at restaurants. Customers don’t have to wear masks inside once they are seated. So, it’s really “wear a mask to protect others, except for people who work in restaurants”.

And if you don’t want to risk your life to make cocktails or so that your neighbors can eat pasta somewhere other than their own home, then you lose your unemployment benefits. Illness and possible death vs. paying for food and housing. It’s quite a choice. But wear a mask always otherwise! It’s so hypocritical.

Our governor likes to act like we’ve done better than other states. And in some ways we have. But other states who opened up their restaurants for inside dining before us have already had numerous covid breakouts at restaurants and have had to re-close them. Every state is going to do things differently and the only benefit I can see from that is so we can learn from each other, but that doesn’t seem to be happening. We just have to sit by and watch one stupid mistake after another in every state.

Doctors lament: ‘No country in the world’ except the US debates masks during...

European countries have their liberals and progressives as well as their right-wing conservatives and libertarians, and one thing all of them can agree on — for all their differences and heated debates — is that wearing face masks in public is a very...

There’s no such thing as a government-issued ‘face mask exempt card’ — it’s...

It’s a unique type of stupid when Americans act like wearing mask is the equivalent of being forced to donate a kidney.

unique type of stupid when Americans

I’m not in the habit of defending Americans but it seems there’s been plenty of stupid to go around in the developed world. Like Sweden isn’t debating mask wearing, but not because they are all wearing them.

Like Sweden isn’t debating mask wearing, but not because they are all wearing them.

True. But they aren’t protesting for their “right” not to wear a mask, turning it into a political issue, or coming up with fake cards saying they don’t have to wear one.
And of course I’m not referring to all Americans- I’m hoping that the intelligent ones who are taking this seriously and taking the right precautions are in the majority.

We have a number of unique qualities that could be viewed as stupidity, no doubt. But other nations have plenty of it as well. This has become far more politicized than necessary. It will be very interesting to see how it all plays out.

On the picture that goes with the story above I see a t-shirt that says “can’t ban these guns” with arrows that point to arms and a Texas Born with a cow and what looks like a diagram of the cuts of beef. So, no surprise these young white Texas good ole boys and girls thought they were immune to the virus. Hate to say it but it’s only when this part of the population gets significantly ill that a majority of Texans will take the pandemic seriously. Luckily they are probably willing to sacrifice for the good of their community so their fellow Texans don’t have to learn for themselves.

I’m so glad I don’t live in the U.S., but I feel for those who do. That is, the ones who are not madder than a box of frogs.

Or a communist plot!! My goodness, I think people who think in such a narrow way must mix with a group of like minded people and if they got out a bit more they’d see the world in a different light. Of course they’d have to socially distance and wear a mask to do so etc- so that stymies that idea!!!

The fake “exemption” card posted is from the “Freedom to Breath Agency” and also has a spelling error in the second sentence… sigh. It all speaks to the vastly reduced investment in public education in this country since the 1980s and we are all paying the price in so many ways.

oh no, that is terrible - no surprise though is it? Haircuts are sooooo important so you look good on the ventilator…

Read this one today- love it.

Its trade name is Wearamaskasshole. Side effects include mild inconvenience, being ostracized by anti-vaxxers, and the power to stop your own asymptomatic transmission as we dive into the next viral wave.

Check with your doctor (or really anyone) to see if Wearamaskasshole is right for you.

*Shared from a reliable source: Everyone with a remedial understanding of how infectious diseases are transmitted. "

My goodness, I think people who think in such a narrow way must mix with a group of like minded people and if they got out a bit more they’d see the world in a different light.

Not really, Lozette. They have a cognitive brain dysfunction. They take it with them everywhere they go.