Charged for Air? Misleading headline to me…

Anyone else see this story?

There’s a TikTok going around about a guest who had a timer or meter attached to the mini-split in his AirBNB he’d rented. To me it looked like a timer that limited how long it could be used. I don’t see how that’s charging for air. Drama/clickbait title to me.

The news story said he was in Spain & they have an energy bill crisis so these meters were being used to cut usage.

I don’t see how it differs much from a Nest or other smart thermostat you can lock into a certain range to save energy. I have mine set to go into ECO mode when it detects no one home. No one has ever complained & they can bypass it if they wish.

@JohnF aren’t you in Spain? Do you know about this? 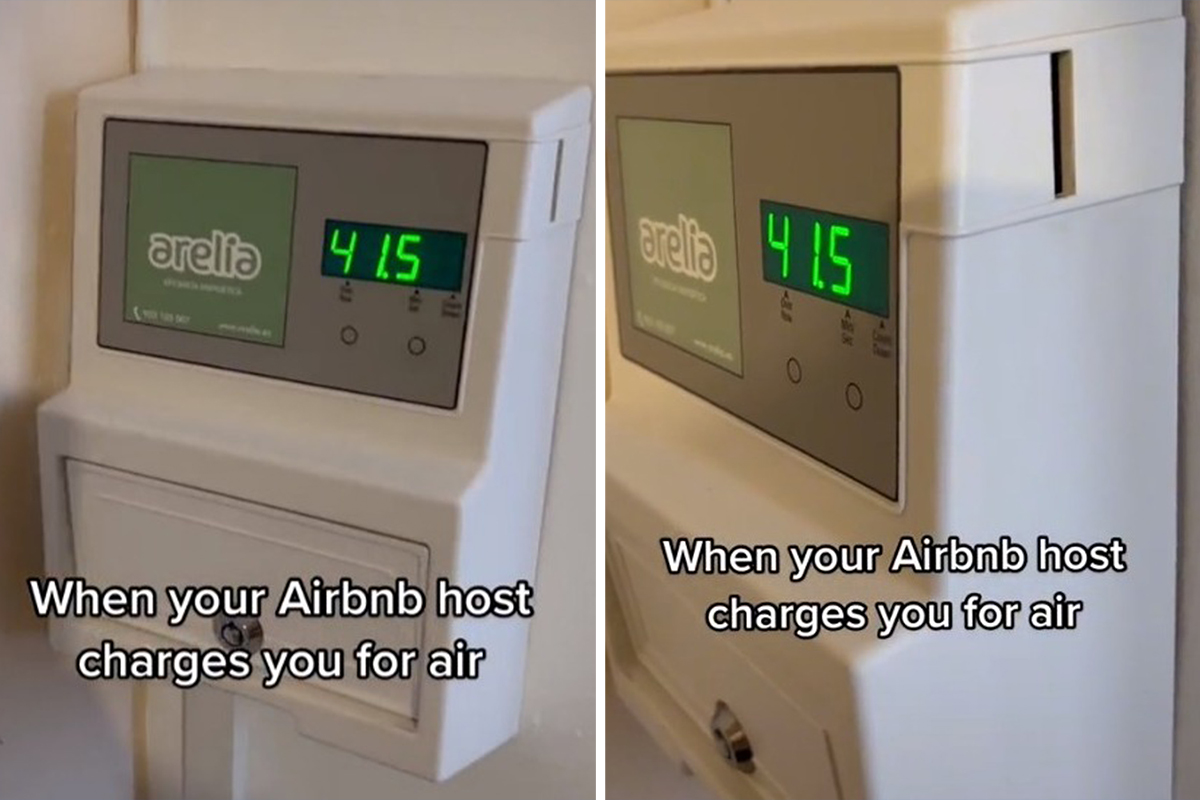 A TIKTOKER has claimed they were charged for air when they rented out a home by a Airbnb host. The social media user @papiwhiterice posted a brief clip on the site just three days ago and it has al…

It’s also possible that paying for the amount of AC used was mentioned in the listing, and the guest didn’t bother to read that part.

And it’s pretty ridiculous click bait to say he was charged for “air”. It’s for heating or cooling, not air to breathe.

AC used was mentioned in the listing, and the guest didn’t bother to read that part.

But of course, this guy’s video has gone viral. It’s hard enough to host w/o guests being conditioned to think of us as tightwads looking to squeeze every penny out of them.

Paying extra for AC is common in many holiday resorts, not just in Spain but popular destinations such as Turkey, Italy, Greece etc. Hoteliers know that many folks are irresponsible when it comes to energy and will happily allow the AC unit to run all day, while they’re at the beach, just so they can come back to a cool room.

I suspect this is a budget hotel in Madrid, where folks pay rock bottom prices, and if they want AC, then they simply fire a few euros into the meter.

Yes, there is an energy price crisis here, but normal folks in hospitality simply raise their prices to cover the increases we’re seeing.

From our perspective, when an apartment is occupied and a guest uses the split AC/heating in a normal pattern (for here), it costs around €11 per day.

Misleading at best. Red Dog journalism at worst. We’re not on the Moon, Mars or some other airless environment, the Guest was not “charged for Air”… Airconditioning is something else entirely. We’ve never had to lock our AC/heater controls but would if necessary.

Some countries use utilities freely whereas others are more concerned about wasting energy. Although I’ve always allowed my guests to have free rein with the AC controls, I might start to rethink.

Paying extra for AC is common in many holiday resorts

I’ve been in hotels where you don’t pay extra, but you have to put your room key (they only give you one) into a slot to turn on the lights, the AC, etc. A clever way to avoid wasting energy.

We’ve never had to lock our AC/heater controls but would if necessary.

I’ve had guests ask if they can control the thermostat that’s by my master bedroom and if I will buy them their own unit for the room.

No. One guest says that they need the AC set at 62. Even hotels don’t allow that and at 62 my home would be Arctic-cold.

I tell them good luck finding a thermostat that cold in a hotel. Buh Bye Felicia (see what I did there, @aelilya ??)

Although I’ve always allowed my guests to have free rein with the AC controls, I might start to rethink.

I don’t know about where you are, but TECO (Tampa Energy) just raised their rates here - a lot. I’m super cheap when I’m alone, but business is getting steady and I’m thinking of raising my rates.

see what I did there

NY Post, a Rupert Murdoch tabloid, repeating article from one of his horrid Brit tabloids. Clickbait started with tabloid headlines that spurred sales at newsstands on the way to the Tube, or made you grab the Enquirer in the checkout line.

My first time in London the heat and hot water were on coin meters in my GF’s flat.