I’m trying to figure out the percentage (or lump-sum) amount that is charged on Airbnb wire transfer payouts so that I’ll manage the way I set up my payout. Meaning that if I’m gonna be charged $20 on $238 and $2000, I’ll let the money in my Airbnb account and ask for a payout when they reach $2000.

Has anybody looked into this?

It doesn’t work that way for a start.

I’ve never understood the commissions charged by the banks.
I have noticed though that if airbnb pays out on a Friday or weekend or on a bank holiday in my country, resulting in the funds being in the banking “system” for a day or two longer, usually means the commission is more than the transactions which are processed within hours or minutes

Minimum payout amount is an account option. I don’t like the idea of it sitting there, in limbo, but it would probably be a handy option for some people. 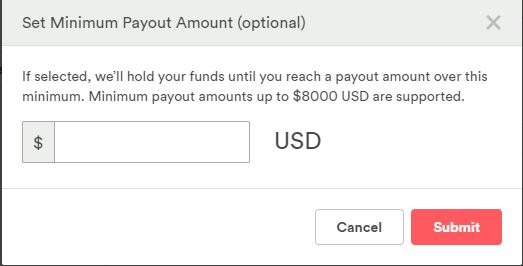 I remember someone on this forum who used this feature to minimize bank transfer fees. I think that they were in one of the Balkan countries, and there was a flat fee for the transfer so his/her costs were a high percentage for shorter stays. This feature worked well for them.

Yes, the minimum payout option was what I was referring to, but there’s no way to make sure I’ll be charged a fixed amount.

@renter101 What jurisdiction are you in? If ABB has to run they payment through several banks to get to you, that can happen. Small jurisdictions, like the caribbean, where banking might be high risk (offshore accounts, money laundering concerns) and low reward (not much trade/transactions), there might be very few correspondent relationships between banks. So, if AirBNB has an account at CItibank and you have an account at Small Bank of the Caribbean, it’s likely that they don’t have a direct relationship, so the payment has to go through Medium Bank of South Florida. Or even two Medium Banks. Though Medium bank may not be making much money off this transaction, they are assuming the risk, and might be charging you for it. Any chance you can change to a big bank??

I have received wire transfers from Google and betting companies overseas without paying commissions. I will try collecting them in the Airbnb account and then withdrawing to see if the commission is the same amount.

right, but it matters which bank ABB uses. you could call your bank, ask the routing of the transaction, and see where the deduction is coming from and how to mitigate it.