B&B NOT self catering

And grateful for positive advice as this is our first season.

No extra charge for directions on how to make vegan breakfasts. LOL.

‘Almost vegan’ refers to our village pub- for dinner which has 3 vegan choices plus various vegetarian dishes, my B&B guests are not vegan and drink milk and eat cheese.

I have done what is possible - only finding out about their diet on arrival. To get back to the shops is not possible- it’s a 20 mile round trip…
But txs for ideas

‘could she eat some wafer thin ham?’ (Nana, sadly no longer with us)

I once went to a restaurant with some friends and didn’t see anything vegetarian on the menu. I asked the waitress and she recommended the chicken soup! I said I don’t eat meat and she responded '“it’s not meat, it’s chicken.” This went back and forth her recommending a pork dish, later seafood. I finally realized that for her meat meant beef. I finally said “vegetarian means not eating anything that used to have a face.” She looked at me and smiled and then recommended the shrimp. I ended up having a house salad which showed up with bacon bits. I learned to look at menus online before selecting a restaurant.

Thankfully things are getting better. Or maybe I need to get out more often. I was quite impressed recently at a very nice restaurant with good looking vegetarian options. 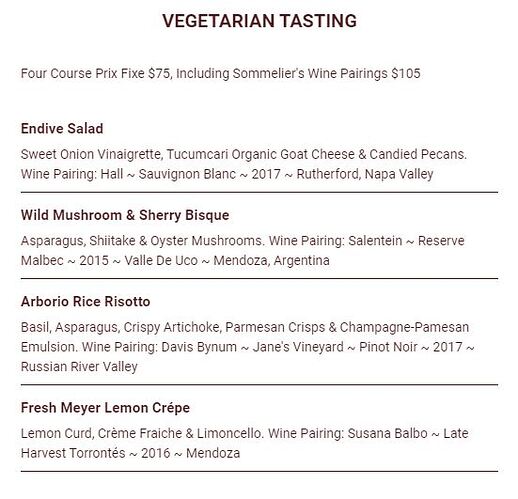 Looks yummy! The mushroom bisque with the endive salad would make a great lunch or dinner.

My friend got an appetizer and I didn’t; they brought me a small cup of that soup at the same time. It was delicious.

My old mum was of that mentality. Many years ago, my sister brought a couple of friends home when we were having a barbecue. When mum found out they were vegetarian she said that was okay because we had chicken.

vegetarian means not eating anything that used to have a face

I (97% vegetarian) have been trying to persuade him (100% vegetarian) that escargot didn’t have faces because they were a variety of mushroom. It hasn’t worked.

A friend of mine took a flight once, back in the days where you actually got a meal on the plane without paying extra, and checked the box for a vegetarian meal.

I once was served with a grated carrot sandwich when I’d requested the vegetarian option! No butter, no sauces, no seasonings, nothing. Just grated carrot.

checked the box for a vegetarian meal.

Back when I was in gainful employment I used THY (Turkish Airlines) quite frequently mostly out of Istanbul, and their acronym was always interpreted by folks as They Hate You. Service was shit, the food was shit, but they did the routes I needed.

You got used to filling up with crap fast food at the airport, because generally what was available onboard was inedible.

Until the day I discovered that the Kosher meals were prepared by a separate catering company, not the subsidiary of THY that did all the meals in Istanbul.

Not only that, if you ordered a Kosher meal, you got Kosher wine, not the crap Cumartesi that often accompanied regular meals. Ok, the wine wasn’t brilliant, but was a lot better than the domestic Turkish wine they carried at that time.

but we both agreed that my Damascene moment in respect of Kosher food was a belter (Scottish term I taught him).

I’d actually heard that once, and you just reminded me- order a kosher meal and it’ll be superior. But I didn’t have any idea why.

My first stab at college I spent Christmas with a friend in the Bay Area. When we had amazing food at Solomon’s Deli, they told us they catered Kosher for all the United flights out of SF. We both ordered Kosher lunches for our trip back to ASU, and they were great!

Having not eaten eaten meat (I do eat seafood at times) for over 40 years I can tell you things have dramatically improved. in the old days it often was iceberg (yuck) salad and a baked potato in a restaurant. Now any place I would go would have an option or two.

I was vegetarian for many years in my early 20s. Then I took a trip to Mexico in the early 70s and realized I was going to be really undenourished if I didn’t eat some meat, unless I wanted to exist on beans and eggs everyday. So I started eating meat again and still do. But now, any touristy place and most decent size towns will have vegetarian options.

Another welcome change for real celiacs is the gluten-free craze. While they find it hilarious that all these people now think gluten is akin to arsenic for everyone, it sure makes life a lot easier for them. My celiac friend used to have to bring food with her everytime she went out for more than a few hours. She could go to an outdoor music concert, where there were at least 40 food trucks and stands set up and no one had a meal she could eat.