Perhaps something has passed me by, or I am being particularly dense this morning but I have not experienced this before;-

I vaguely remember a recent thread on the accept/decline dynamic and a possible tightening from Air, plus penalties for declining. Is this the latest manifestation or have I lost the plot? Again.

There are two types.

It can be confusing especially if you are on IB and don’t get many. The inquiries continue to tick down even after responding and that big red button to pre-approve is staring at you. But you just refresh your browser to stop the clock. I’ve learned this the hard way and from help from others on this forum! It sounds like you have a “request to book.” and will need to “Accept” or “Decline”

I vaguely remember a recent thread on the accept/decline dynamic and a possible tightening from Air, plus penalties for declining.

Yes we recently got a warning from Airbnb for too many declines. We were at 87% acceptance rate and they set the bar for our area at 88%. We have since reached their goal and our dashboard warning has gone away. Better to ask a guest to widthdraw their request if you can’t accommodate them rather than decline.

Thanks Mike, and Maggeroni; both really helpful. No, I don’t get many inquiries with IB on. The only question the guest asked was if she could stay! All sorted now, with no difficulty. What did twist with my brain was the message from Air five hours after the inquiry.

The bar is 88% for all areas. Under progress and opportunities one will see this: 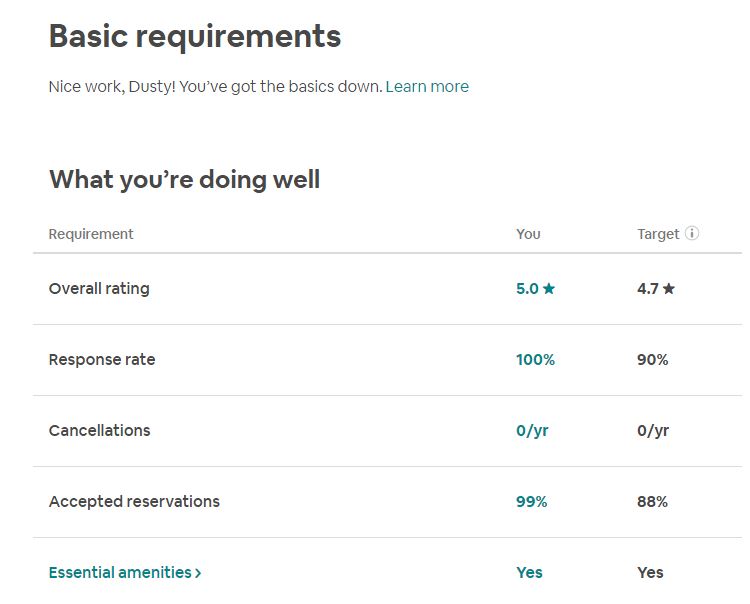 What I would like to know is what happens if you fall below the target and stay there? Permanent dashboard warning? Suspend you for a week?

Glad I read this. I had never noticed this metric. Do you know if IB counts as an accept?

Coincidentally I’d never noticed until yesterday. I assume it’s been there since the new standards rolled out in April.

if IB counts as an accept?

I don’t know but I assume so. I was a little puzzled by my 99% accept rate. I’m wondering who I turned down. Maybe it’s the booking I got a penalty free cancellation for.

I’m at like 91% accept. But that’s because I routinely deny locals unless they give me a logical reason why they want to stay here. I got burned by a local looking for a place to bring his glittered-up not wife who smoked, which is strictly against my rules. Then they stole my stuff.

As an aside, I wasn’t allowed to include the theft in my review because it was an “open investigation”. But I did leave a very negative review. Their next host contacted me directly after they left her house because she had the same experience and she wanted to know what happened at my place. Turns out, they were using my laundry basket to move into to the next place.

But anyway, good to know I need to accept some more to get my percentage up.

I’m wondering who I turned down. Maybe it’s the booking I got a penalty free cancellation for. 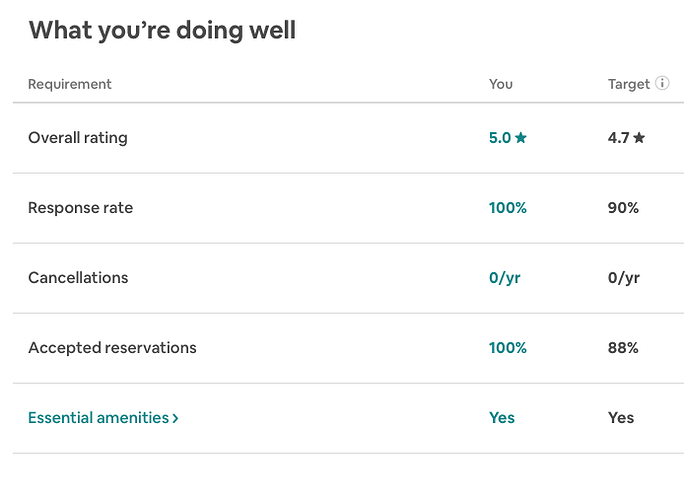 Who knows? I’m sure not even Airbnb knows. For most of the past year I had a response rate of 99% due to message appearing on my account MONTHS after it was sent by the prospective guest. When it came through I sent a message apologizing but she didn’t respond and probably thought I was lying. That’s gone now because it’s been a year and now they say I don’t 100% accept? It seems to me that if you IB then acceptance rate shouldn’t be counted against you at all.

It seems to me that if you IB then acceptance rate shouldn’t be counted against you at all.

It’s for the last 365 days so maybe you passed the time range?

maybe you passed the time range?

Nope. One of these incidents was just two months ago. Group of 8 trying to book into a space with a 3 maximum. A group of really clueless kids here for a school-sponsored conference.

That’s not the only thing they mess up on. I got this email last night. I called and apparently it was a pretty widespread problem; paid twice for one reservation.

Hello Michael,
Looks like you’ve accidentally been issued an inaccurate payout, resulting in overpayment of $968.50 on May 19, 2018. We’ve gone ahead and reversed the extra amount from your bank account. Thanks for being patient while we’re fixing this issue.
Best regards,
The Airbnb Team

Yes, it happened to me too. Mine was only $43 and I didn’t realize I’d been paid twice. I did double check my bank account and yes, I had two payments.

I wish they’d spend their coding time fixing the damned website, or adding a pet fee function, rather than on pet projects that don’t add any value, like the stupid “listing highlights”.

Is it too much to hope that they’re using some business logic in their calculations?

I can’t recall the options under the reason for decline, but if you selected something like “breaking house rules”, maybe they aren’t counting them in the decline count?

I don’t think there’s a list to choose from. They do ask you to tell the potential guest why you declined, but it’s not a list you choose from.

Most of my guests IB, so it’s been a while since I declined, but I thought there was a drop-down box with options like “Not suitable”, “Dates not available”. Perhaps they’ve gotten rid of this.

Well now I’m not sure. It’s been a long time since I declined someone as well, so maybe I have no idea what I’m talking about.